No. 10 Kentucky Ready for Another Road Test 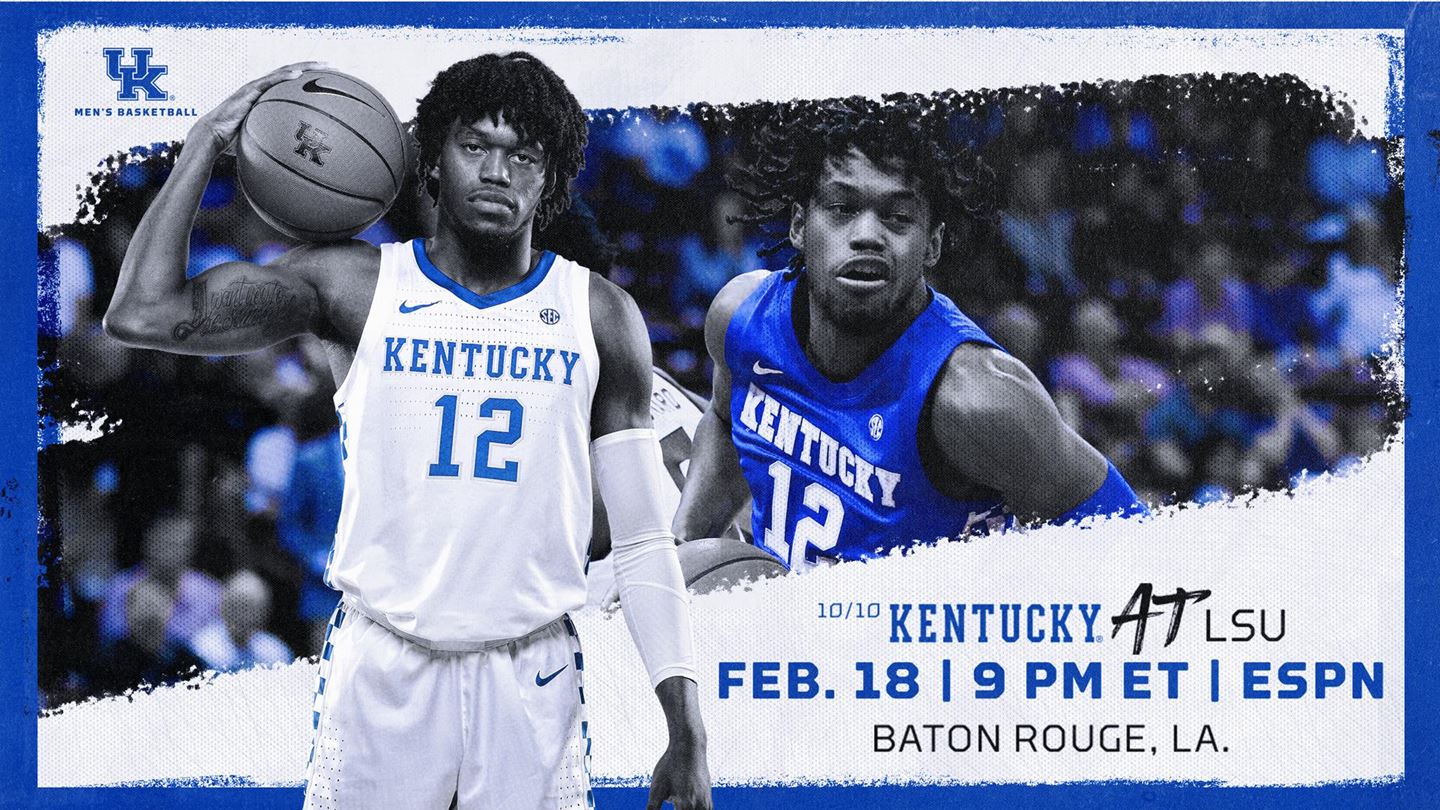 The last 72 hours have given Kentucky fans reason for excitement.

A win Saturday, combined with losses by Auburn and LSU, vaulted the Wildcats into sole possession of first place in the Southeastern Conference. That same victory over Ole Miss – UK’s eighth in nine outings – also landed the Cats in the top 10 of both polls for the first time in nine weeks, signaling they have reasserted themselves among the top tier of Final Four contenders with March less than two weeks away.

Exciting as those things may be, neither is really an achievement on its own – at least not when you’re Kentucky. UK is well positioned to do some special things in the coming weeks because, well, the Cats don’t spend much time thinking about the coming weeks

“There is no sense in looking forward because you can’t do anything about it,” assistant coach Tony Barbee said. “The biggest thing we have to do is keep this team present and in the moment. That is today’s focus on today’s practice and the focus on preparation for LSU tomorrow. That’s the only thing that you can control.”

No. 10/10 UK (20-5, 10-2 SEC) would be well served keeping its focus on the present considering the Cats are about to face one of the league’s most daunting challenges: traveling to face the Tigers (17-6, 9-3 SEC) in Baton Rouge, Louisiana. LSU is unbeaten at home in conference play entering Tuesday’s 9 p.m. tipoff, thanks in large part to an offense that ranks third nationally in adjusted efficiency according to kenpom.com.

“They’ve got five guys starting that are not just averaging 10 points; they are averaging significant double figures,” Barbee said. “They’re a fantastic rebounding team on the offensive end of the floor. They have traditionally been, since Will (Wade) has been there, they will shoot it and then go get it. They shoot the 3. They drive the ball. They’ve got a couple guys that can post up. (Trendon) Watford is a matchup problem at the three. It’s the reason why they are a fantastic offensive team. They have a lot of interchangeable parts and can do a lot of different things.”

LSU’s five starters are each averaging at least 11.8 points, led by Skylar Mays and his 16.5 points per game. The Tigers are shooting 55.7% from inside the arc (eighth nationally) and rebound 35.6% of their own misses from the field, placing them 13th nationally.

“End of the season, playing teams like this is good for us, especially going into the conference tournament, get a little bit of momentum going to it,” Nate Sestina said. “But it is a challenge. You have a bunch of guys that can play, a bunch of guys that can rebound the ball well. They’re bigger, a little bigger with their guards. So, it’s just a big-time matchup for us and for our guards to be able to step up and play.”

The Tigers have lost three of four games – all on the road and all by single digits – but have still scored at least 82 points in each. The defending regular-season champions might have fallen behind UK in SEC standings after an 8-0 start to league play, but UK knows to expect LSU’s best.

“They’re a good team and I don’t think they’re going to play bad for forever,” Keion Brooks Jr. said. “There’s going to be a time where they eventually turn it back around, so we gotta go in and just continue to focus on us, execute our game plan and just try to execute what the coaches draw up for us and do everything we can to get the W.”

LSU might be ninth in the country in scoring at 80.8 points per game, but this is a challenge Kentucky is up for. An opponent hasn’t shot 50% from the field against UK in nearly two months and each of the Cats’ last six opponents have shot 40% or less.

“You can just tell by how we fly around on the floor it’s starting to come more instinctual,” Brooks said. “Not thinking as much, especially on defense. We’re paying (attention) to the scouting report, personnel, what players like to do and trying to take away their strength, then force them to do things they’re not as good at. You can just kind of tell we’re clicking on all cylinders right now.”

Even so, John Calipari and his staff know their team has more in the tank. The thing they love is they know they have a team full of willing participants in finding it.

“This is a group that’s starting to get it,” Barbee said. “They are holding each other accountable. Like Cal says, it’s becoming a player-driven team that if someone is not carrying his weight, the first voice you hear is not the coach. It’s the players that are saying to their teammate, ‘Look you’ve gotta carry your load.’ So, it’s neat to see that come together.”

Stringing baskets together was only half the challenge for Kentucky, which also had to counter-punch its way past Mississippi.

The lead traded hands nine times in the final five minutes before Nick Richards ultimately gave the No. 12 Wildcats the needed edge at the foul line.

Richards had 16 points, including two go-ahead free throws with 1:11 remaining, and Immanuel Quickley and Keion Brooks Jr. each made two more in the closing seconds to help Kentucky escape against Ole Miss 67-62 on Saturday.

The Wildcats (20-5, 10-2 Southeastern Conference) shot just 39% overall but made 48.3% in the second half to erase a seven-point deficit and create a back-and-forth game for the final eight minutes. Richards followed two free throws with 2:11 left with two more a minute later to put Kentucky up 63-62.

Coupled with losses by LSU and Auburn later Saturday, UK took sole possession of first place in the SEC.

“It shows that we have a winning mentality, a will to win,” said Richards, who overcame a slow start to finish 6 of 10 from the field with seven rebounds. “I wasn’t my best in the first half and in the post. I wasn’t really my best the entire game, but we still came out and found a way to win.”

Kentucky needed a gutsy dive and scramble by EJ Montgomery for a loose ball that he eventually fed to Tyrese Maxey for a go-ahead layup. Free throws certainly helped the Wildcats, especially with the Rebels answering with a clutch basket of their own and poised for one more.

And that’s where Ole Miss fell short with its final chances.

Breein Tyree missed the first of a 1-and-1, but Maxey’s turnover gave the Rebels the ball with 29.8 seconds left. Devontae Shuler dribbled time off the clock but airballed a 3-pointer out of bounds with nine seconds left.

Quickley, who had 17 points, was fouled a few seconds later and added two from the line with 6.6 left before Brooks sealed the win with two more.

“This was a rock fight and a great win,” Kentucky coach John Calipari said.

Maxey had 14 points while Montgomery had eight rebounds as Kentucky beat the Rebels 41-33 on the glass.

Tyree had 19 points, while Blake Hinson and KJ Buffen each had 13 for Ole Miss (13-12, 4-8), which had won three in a row. The Rebels dropped their 11th consecutive series game to the Wildcats.

Part of what’s made this Kentucky team so dangerous is the balance.

Six different players have led the Wildcats in scoring. No player has led the team in scoring more than seven times but three players are tied for the team lead with seven games.

Four players have scored at least 25 points in a game a total of seven times this season, but ironically none of them have been the Wildcats’ leading scorer, Immanuel Quickley, who is averaging 15.0 points per game and has scored as many as 23 twice.

As of right now, this is the first Kentucky team to feature four Wildcats averaging at least 12.0 points per game since Rick Pitino’s first UK team back in 1989-90.