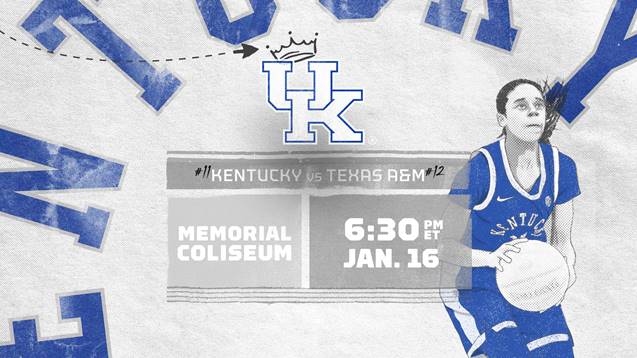 LEXINGTON, Ky. – Looking to continue its three-game winning streak and remain unbeaten in Memorial Coliseum this season, the No. 11 University of Kentucky women’s basketball team welcomes No. 12 Texas A&M to town Thursday for an early 6:30 p.m. ET tip inside the historic venue.

Single-game tickets are $10 (all ages) in reserved seating areas, while general admission tickets are $8 for adults and $5 for children (ages 6-18) and seniors (age 65+). Children aged 5 and under do not require a ticket in general admission areas. Young fans are encouraged to take advantage of the Kid Zone pregame with games, poster making stations, coloring stations and more. Junior guard Chasity Patterson is scheduled to sign autographs on the concourse following the game.

The game vs. Texas A&M will be broadcast on SEC Network with Courtney Lyle, Carolyn Peck and Steffi Sorensen on the call. The action can also be seen through WatchESPN on computers, smartphones or tablets. Darren Headrick will have the call on the UK Sports Network on 630AM WLAP in Lexington. Live stats and free live audio will be available online at UKathletics.com.

Spectator parking is located in all E-lots surrounding Memorial Coliseum and are off control 3 hours prior to tip. Additionally, the South Limestone Garage (PS#5) and the Rose Street Garage (PS#2) are available 2 hours prior to tip. The Bill Gatton Student Center is available as a pay-to-park option. Availability is based on the Gatton Student Center Event Schedule. Fans are reminded that classes will be in session Thursday and some parking options may have limited availability due to the early tip.

Kentucky (14-2, 3-1 SEC) has won each of its last three games and has moved up to No. 11 in the latest Associated Press Top 25 and USA Today/Coaches Top 25. The Wildcats started this winning streak with a thrilling victory over top-25 ranked Tennessee before back-to-back road wins at Alabama and Florida. Sophomore guard Rhyne Howard, who has won back-to-back SEC Player of the Week honors, has paced the Wildcats in league play by averaging 32.5 points per game and hitting 54.5 percent from the long range. Overall this season, Howard is averaging 23.8 points per game with 5.8 rebounds per game. She is leading the nation in total points with 381, while she sits third in points per game and top-10 in 3s made and 3s made per game.

In its latest victory, the Wildcats used a team effort and an incredible defensive performance to defeat Florida, 65-45 Sunday in Gainesville. Junior guard Chasity Patterson was the star, scoring 20 points and hitting three 3s, including back-to-back 3s at the end of the first half to give UK a lead it would not relinquish. UK held Florida to a season-low 45 points in the game and did not let Florida score over 12 points in any quarter – the first time UK has done that on the road this season. The strong defensive performance put Kentucky back into the top-20 nationally in scoring defense, allowing 54.7 points per game.

Texas A&M (14-2, 2-1 SEC) enters Thursday’s game after a week off, falling in its last contest vs. LSU on Jan. 9. The Aggies had a five-point lead at halftime but played the second half without star junior guard Chennedy Cater, who played just 17 minutes and scored 12 points on 5-of-9 shooting. Junior forward N’dea Jones stepped up for the Aggies and scored 19 points with 12 rebounds, while junior center Ciera Johnson had 11 points and 10 rebounds in the loss. Prior to the loss to LSU, the Aggies’ lone loss was an 80-58 setback against Florida State in the Maddie Dixon Classic in Fort Worth, Texas.

Texas A&M leads the all-time series in games played against Kentucky, 6-4, including a 3-1 mark in games played in Lexington. Kentucky’s lone win against TAMU at home came on Jan. 10, 2013 (65-62) with the Aggies winning each of the last three meetings in Lexington. The home team has won just three of the 10 all-time meetings in the series. Texas A&M has won four straight over Kentucky overall. Last season, the two teams met twice with the Aggies winning 73-71 in College Station and 62-55 in Lexington. Howard had 21 points in the game at TAMU and seven points in the game at home, while Carter had 20 and 24 adding a combined nine assists.

Kentucky has 52 wins against ranked teams under Matthew Mitchell, including a 1-2 mark this season with both losses coming to current top-five ranked foes. UK is 4-10 all-time against teams ranked No. 12 in the AP Top 25 but have won three straight against No. 12 ranked teams. UK is 4-3 all-time against TAMU when the Aggies are ranked.