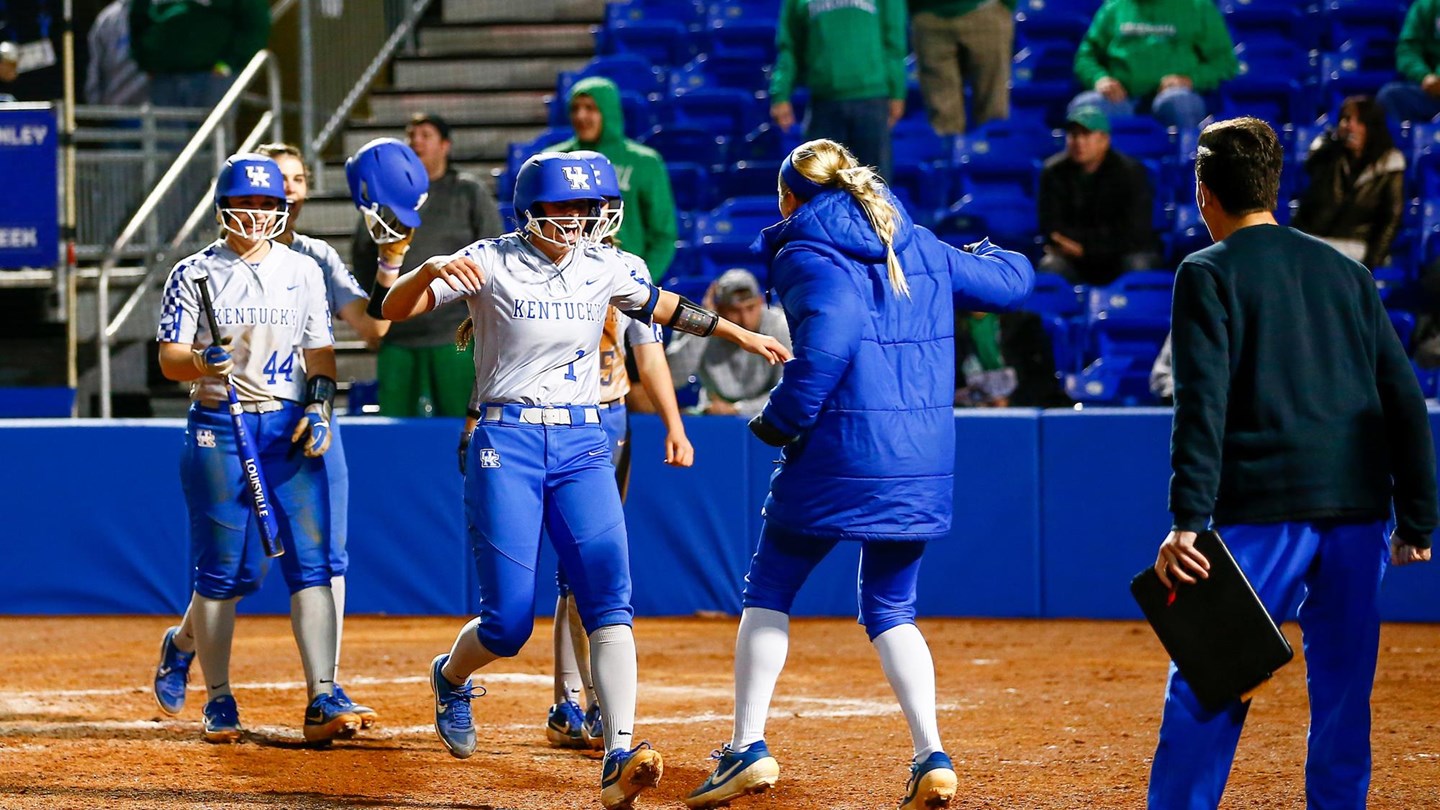 LEXINGTON, Ky. – In one of the wildest games you’ll ever see, the No. 11 Kentucky softball team scored 12 runs in the final three innings to overcome a 15-4 deficit and take down the Marshall Thundering Herd 16-15 on Wednesday night at John Cropp Stadium.

Freshman utility player Miranda Stoddard hit the go-ahead home run in the bottom of the sixth inning to plate three runs, and take a 15-13 deficit into a 16-13 lead. It was Stoddard’s first-career home run and sailed just over the left-field foul line on the fly to give the Wildcats the lead.

In a match-up of the two highest-scoring offenses in the country on Wednesday, Kentucky and Marshall combined for 31 runs, 27 hits, seven errors, two grand slams, six home runs and 12 extra-base hits.

Kentucky with the unlikely win improves to 20-4 on the season as Marshall falls to 18-7. The Wildcats will dip their toes back into Southeastern Conference play this weekend as they travel to Starkville, Mississippi for a three-game series with the Mississippi State Bulldogs.

Five different UK players had multi-RBI in the contest, headlined by Stoddard’s four. Additionally, Mallory Peyton had three and Rylea Smith, Tatum Spangler and Alex Martens both had a pair.

Stoddard was credited with the win, pitching the final two innings, allowing just two hits, not allowing a run and striking out three batters.

Key Stat
11. The Wildcats came back from 11 runs down going into the bottom of the fourth inning to score two runs and extend the game, and then followed that up with four in the fifth and six runs in the seventh to complete the 11-run comeback.

Key Play
The key play in the game was Stoddard’s go-ahead home run in the bottom of the sixth inning. The freshman from Anaheim, California belted one out to left and just inside the foul pole to deposit into the bank her first HR of her career.

Key Player
The key player in the game was Sloan Gayan. Gayan, a freshman pitcher, steadied the UK pitching staff in the middle innings of the game on Wednesday, throwing 1.1 innings without allowing a run and conceding just one hit. Gayan also stuck out a batter for her 10th K of the season.

Kentucky Run Recap
In the bottom of the first, Kayla Kowalik led off the inning with a walk and scored on a Rylea Smith RBI single. Mallory Peyton drove home Smith to pull UK to within 3-2 after one. MAR 3, UK 2

Trailing 10-2 in the bottom of the third, Alex Martens roped an RBI single up the middle to score Rylea Smith and a Marshall error brought in a fourth Kentucky run of the game. MAR 10, UK 4

Down 15-4 in the bottom of the fourth, Kentucky again responded with a pair of runs as Tatum Spangler hit an RBI double into the gap to plate Kowalik and Spangler scored on Mallory Peyton’s first-career triple. MAR 15, UK 6

In the bottom of the fifth, after Gayan kept the Herd at bay for their first scoreless inning all night, Kentucky scored four runs. A Marshall error, three walks, and a pair of hits was enough for Smith, Deters, Abernathy and Spangler to cross the plate as the Wildcats pulled to within five runs. MAR 15, UK 10

Headed into the bottom of the sixth, Kentucky was trailing 15-10 and the first two batters reached in the form of a lead-off triple by Lauren Johnson and an RBI double by Renee Abernathy. Following a Marshall pitching change, Stoddard came up with UK down two runs and clubbed a three-run bomb to left. Stoddard then took to the circle to close out the contest, getting the Herd to go 1-2-3 in the top of the seventh to secure Kentucky’s 20th win of the season. FINAL – #11 Kentucky 16, Marshall 15