No. 13 Kentucky Travels to Missouri Thursday 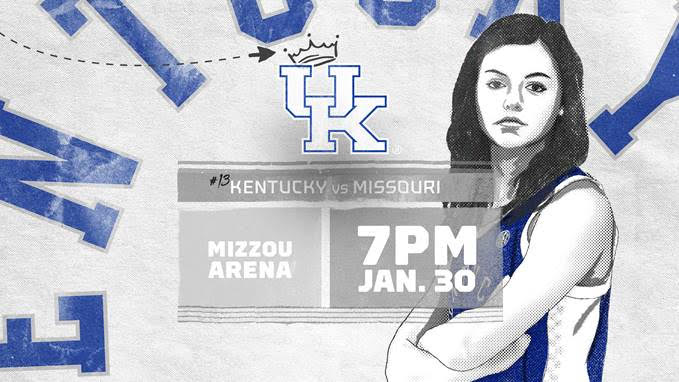 Wildcats and Tigers will tip at 7 p.m. ET Thursday on SEC Network

LEXINGTON, Ky. – The No. 13 University of Kentucky women’s basketball team will continue its stretch of three games in six days Thursday when it travels to Columbia, Missouri, to take on the Missouri Tigers are 7 p.m. ET inside Mizzou Arena.

The game will be broadcast on SEC Network with Courtney Lyle and Christy Thomaskutty on the call. The action can also be seen through WatchESPN on computers, smartphones or tablets. Darren Headrick will have the call on the UK Sports Network on 630AM WLAP in Lexington. Live stats and free live audio will be available online at UKathletics.com.

Kentucky (16-3, 5-2 Southeastern Conference) is coming off a 68-61 win against Auburn on Monday. The Wildcats held a 20-point lead in the first half and 16-point halftime lead before the Tigers stormed back by going on a 14-0 run – the most consecutive points scored against UK this season – to eventually tie the game early in the fourth quarter. The Wildcats would end the game outscoring Auburn 17-10 down the stretch to secure the win. Senior guard Sabrina Haines led Kentucky with 17 points, hitting four 3s while junior forward KeKe McKinney scored 13 points with eight rebounds, going 6-of-6 from the field. Sophomore guard Rhyne Howard scored 10 points in the game, missing much of the second half with a finger injury.

Kentucky leads the all-time series in games played against Missouri, 7-4 while the series is tied in games played in Columbia, 2-2. Missouri has won three of the last four meetings against the Wildcats, including each of the last two in Columbia. Last season, the two teams met in Lexington during the regular season with UK earning a 52-41 win over the Tigers. In the rematch in the quarterfinals of the SEC Tournament, Missouri defeated the Wildcats in overtime 70-68. Matthew Mitchell is 6-3 in his UK tenure against Missouri.