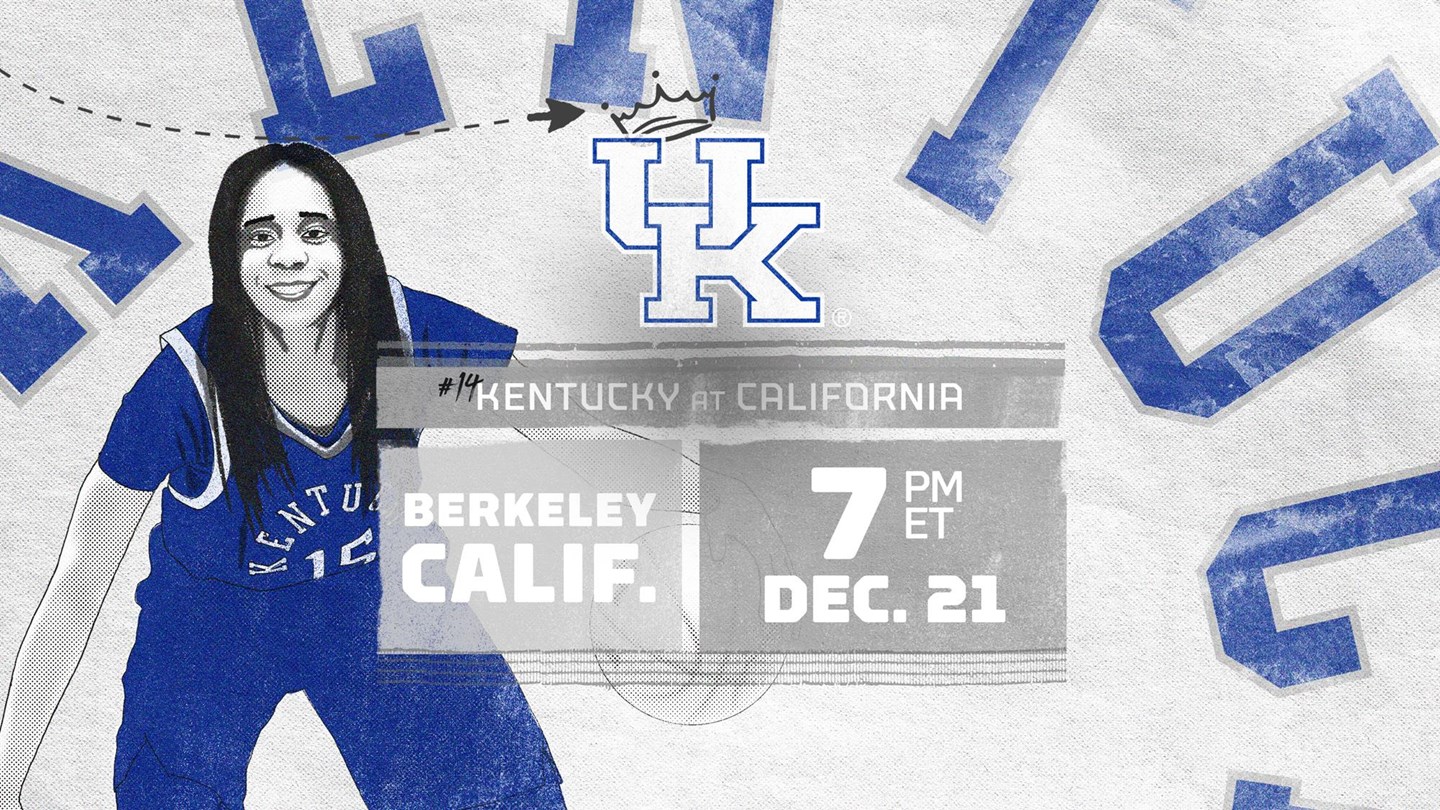 LEXINGTON, Ky. – Looking to close out non-conference play with a win after sustaining its first loss of the season Sunday at Rupp Arena against top-10 ranked Louisville, the No. 14 University of Kentucky women’s basketball team travels to play at California on Saturday at 7 p.m. ET inside Haas Pavilion in Berkeley, California.

The game will be streamed for free online at CalBears.com while Darren Headrick will have the call on the UK Sports Network on 98.5FM in Lexington. Live stats and free live audio will be available online at UKathletics.com.

The trip west for Kentucky will be the third road game of the season and the first since the Nov. 16 win at Virginia. UK’s other road win this season was a 67-52 decision at Middle Tennessee in the second game of the year. The Wildcats are coming off a seven-game homestand where they went 6-1 with the only loss coming to top-10 ranked Louisville. The Wildcats held a 10-point lead late in the third quarter against the Cardinals but could not sustain the momentum, falling 67-66. Sophomore guard Rhyne Howard had a game-best 26 points while two other Wildcats scored in double figures in the game.

The home stretch for Kentucky brought the Wildcat offense back to life after a slow start to the season offensively in its first four games. During the seven-game homestand, UK bested or tied its season high in points five times. The stretched started with 79 points against Morehead State before 81 points against Grambling State and Austin Peay. UK scored 86 points against Charlotte and 79 points against Samford before a season-high 91 points against Winthrop.

In the last seven games, UK is hitting 48.6 percent from the field. The Wildcats have also hit 69 3-pointers during that stretch and posted a combined 126 assists with just 78 turnovers. UK has had 40+ first-half points in each of the last seven games and had 20+ point halftime leads in six of those games. Prior to 79 points against Samford, this was the first time UK has scored 80 or more points in three straight games since 2015-16. Howard has been huge during the stretch, averaging 23.1 points per game, hitting 46.7 percent from the field, 42.6 percent from 3 and going 25-of-30 from the free-throw line. UK has hit 10 or more 3-pointers in four straight games for the first time in program history.

Overall this season, Kentucky (10-1) is paced by Howard’s 20.2 points per game and 5.5 rebounds per game, while she has hit a team-best 31 3s. Senior guard Sabrina Haines is averaging 11.6 points and 4.7 rebounds per game while sitting tops in the league in 3-point field-goal percentage. Fellow senior guard Jaida Roper is averaging 8.7 points per game with a team-best 46 assists. Kentucky junior guard Chasity Patterson is expected to see her first playing time in Saturday’s game after sitting out two semesters due to NCAA transfer rules. Patterson transferred to UK in January 2019 and has been practicing with the team for the past two semesters.

California enters Saturday’s game with a 7-2 record, including a 6-0 mark at home and 1-2 record on the road. After dropping their first two games of the season at Harvard and at top-five ranked UCONN, the Golden Bears have won seven straight including taking down top-25 ranked Arkansas at Haas Pavilion in late November. Cal’s other wins are against UC Riverside, San Diego State, North Carolina Central, Long Beach St., Boston and Santa Clara.

In its last game against Santa Clara, Cal was paced by senior guard Jaelyn Brown, who scored 26 points with 11 rebounds. Freshman forward Evelien Lutje Schiph scored 19 points with nine rebounds while senior center Chen Yue scored 10 points with 10 rebounds, adding a block. The Golden Bears went 0-of-10 from long range in the game but 15-of-20 from the free-throw line and only had four turnovers.

Sunday will be the second all-time meeting between the two teams in women’s basketball with Cal winning the first meeting 62-52 in Lexington on Dec. 21, 2017.