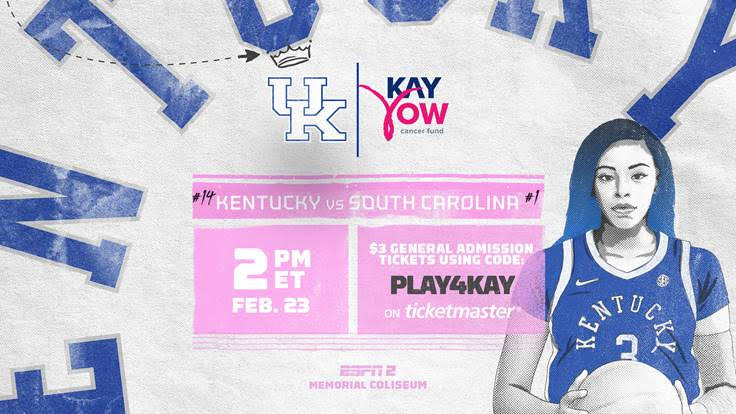 LEXINGTON, Ky. – Coming off its best offensive performance of the season Thursday when it scored a season-high 94 points at Ole Miss, the No. 14 University of Kentucky women’s basketball team looks to continue its impressive play Sunday as it plays host to No. 1 South Carolina at 2 p.m. ET inside Memorial Coliseum.

Sunday’s game will be UK’s annual Play4Kay Pink Game to help raise awareness and support cancer research. Fans are encouraged to pick up “I Fight For” cards when they enter Memorial Coliseum on Sunday and write a name of someone they are supporting in a fight against cancer. In the first quarter, the entire arena will stand and hold up their “I Fight For” cards as a sign of unity to all those battling cancer that they are not alone in this fight.

General admission tickets are available online at ticketmaster.com for just $3 using the promo code Play4Kay. Children aged 5 and under do not require a ticket in general admission areas. Young fans are encouraged to take advantage of the Kid Zone pregame with games, poster making stations, coloring stations and more. Junior forward KeKe McKinney is scheduled to sign autographs on the concourse following the game.

The game vs. South Carolina will be broadcast on ESPN2 with Courtney Lyle and Carolyn Peck on the call. The action can also be seen through WatchESPN on computers, smartphones or tablets. Darren Headrick will have the call on the UK Sports Network on 630AM WLAP in Lexington. Live stats and free live audio will be available online at UKathletics.com.

Kentucky (20-5, 9-4 SEC) is coming off a 94-52 win at Ole Miss on Thursday. The impressive offensive performance was UK’s season-high in points while the Wildcats hit 11 3-pointers and have now hit 10 or more 3s in 12 games this season. Sophomore guard Rhyne Howard led Kentucky with 21 points and seven rebounds while five Wildcats total scored in double figures for the third time this season. Senior guard Sabrina Haines and junior guard Chasity Patterson each scored 15 points in the game while senior guard Jaida Roper and sophomore guard Blair Green each had 10 points. The Wildcats hit 50.7 percent from the field and 47.8 percent from long range in the game while the Rebels hit just 31.9 percent from the field. UK forced 21 turnovers and had a +14 rebounding margin in the game.

Howard leads UK and nearly the entire country in scoring this season sitting second nationally at 23.1 points per game. The sophomore is also averaging a team-best 6.4 rebounds per game while leading UK with 54 steals and 66 3s made. Patterson is second on the team with 13.1 points per game adding 22 assists and 22 steals, while Haines is the third Wildcat averaging double figures at 10.4 points per game. Haines ranks high nationally in 3-point field-goal percentage at 42.0 percent.

South Carolina enters Sunday’s game ranked No. 1 in the Associated Press Top 25 and USA Today/Coaches Top 25. The Gamecocks have won 20 straight games after sustain their only loss of the season to then-No. 17/23 Indiana in the 2019 Paradise Jam. South Carolina is 10-0 in road games this season and currently boast a perfect 13-0 league record. As a team, the Gamecocks are averaging 82.4 points per game this season hitting 47.0 percent from the field and 36.0 percent from long range. South Carolina is limiting teams to 55.3 points per game and just 33.1 percent from the field and 29.8 percent from long range. SC has a +12.5 rebounding margin and +2.8 turnover margin this season.