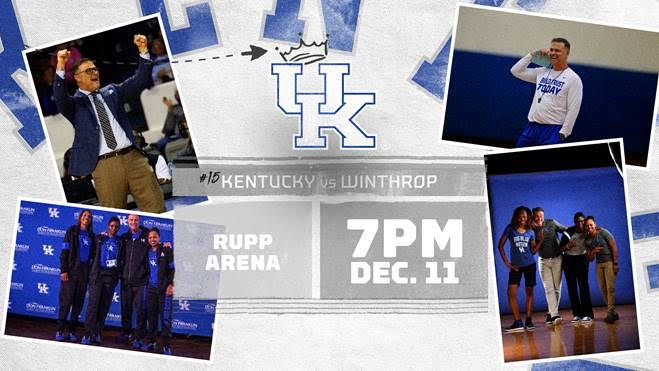 LEXINGTON, Ky. – The No. 14 University of Kentucky women’s basketball team will continue its seven-game homestretch Wednesday at 7 p.m. ET when it plays host to Winthrop inside historic Rupp Arena. Wednesday’s game is the first of two games inside Rupp Arena this week for Kentucky, which will also host No. 7 Louisville at the venue on Sunday at 1 p.m. ET.

Tickets to both games are available at UKathletics.com/tickets. Fans can purchase $3 tickets for the Louisville game by using the promo code UKWBB19. UK students get into all Kentucky women’s basketball games free of charge with a valid UK Student ID, while UK faculty and staff get in free plus up to three guests with a valid UK ID.

Winthrop enters Wednesday’s game with a 1-5 record. The Eagles lone win this season was a 56-46 decision at North Carolina Central. The losses have been home vs. Iona, Georgia Southern and College of Charleston and on the road at Old Dominion and Wofford. In its last outing, Winthrop fell vs. College of Charleston 84-73 at home.

This is the second all-time meeting between Kentucky and Winthrop in women’s basketball. The Wildcats lead the all-time series 1-0. The first and only meeting occurred Jan. 3, 2000, when the Wildcats earned a 94-39 win over the Eagles in Memorial Coliseum. Kentucky owns a 14-1 all-time record against teams from the current alignment of the Big South Conference. UK’s only loss to a Big South team came to Liberty in 1998. Winthrop is the only Big South team that UK is scheduled to face this season.

Kentucky holds a 27-18 all-time record at Rupp Arena, including an 8-9 mark under Matthew Mitchell. Last year, UK won both of its games in Rupp Arena defeating Virginia 63-51 and Florida 62-51. UK has played at least one game in Rupp Arena each of the last nine years. The Wildcats will play two games in Rupp Arena this season, marking the third straight year it has played two or more games in the historic venue.