No. 15 Kentucky Looks to Bounce Back Thursday vs. Alabama 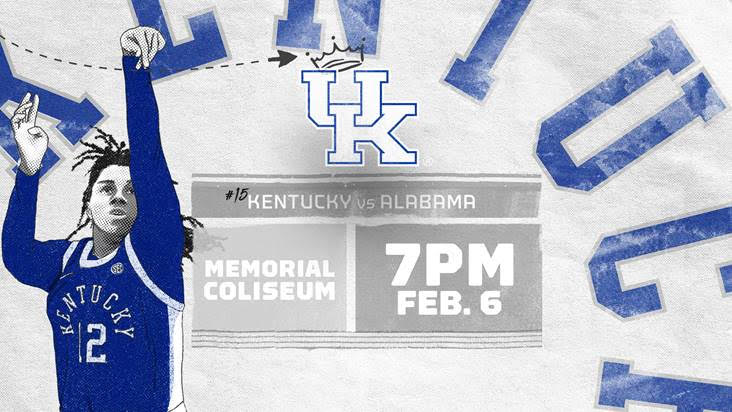 LEXINGTON, Ky. – The No. 15 University of Kentucky women’s basketball team will look to bounce back from only its fourth loss of the season when it plays host to Alabama on Thursday at 7 p.m. ET inside Memorial Coliseum. UK players will be wearing “Adamstown” shirts pregame paying homage to the former community as part of the ongoing year-long celebration of the university’s “70 Years of Integration” series and commemorating 50 years of black studies at UK. The commemoration is sponsored by UK’s Office for Institutional Diversity and more information on the commemoration is below.

Single-game tickets are $10 (all ages) in reserved seating areas, while general admission tickets are $8 for adults and $5 for children (ages 6-18) and seniors (age 65+). Children aged 5 and under do not require a ticket in general admission areas. Young fans are encouraged to take advantage of the Kid Zone pregame with games, poster making stations, coloring stations and more. Senior guard Amanda Paschal is scheduled to sign autographs on the concourse following the game.

The game vs. Alabama will be broadcast on SEC Network+ with Jeff Piecoro and Christi Thomas on the call. The action can also be seen through WatchESPN on computers, smartphones or tablets. Darren Headrick will have the call on the UK Sports Network on 630AM WLAP in Lexington. Live stats and free live audio will be available online at UKathletics.com.

Kentucky (17-4, 6-3 SEC) is coming off a disappointing loss on Sunday to Florida letting a 10-point halftime lead get away in the second half. Junior guard Chasity Patterson scored a career high 25 points in the game, while senior guard Jaida Roper had 15 points. The Wildcats hit a season-low three 3s in the game and allowed the Gators to score 51 second-half points in the loss. The Wildcats continue to be without sophomore guard Rhyne Howard, who is averaging a team-best 23.2 points per game and 6.3 rebounds per game. The guard is expected to return in mid-February.

UK leads the all-time series against Alabama, 32-17, including a 14-6 mark in games played in Lexington. The Wildcats have won eight straight games against the Crimson Tide, including eight of the last nine against Alabama in Lexington. UK’s last loss in the series was a 57-55 setback on Jan. 23, 2014 in Lexington. Of Kentucky’s eight straight wins against Alabama only one has been by single digits, edging the Crimson Tide in the 2018 SEC Tournament 71-64 in Nashville. The two teams met already this season on Jan. 9 in Tuscaloosa with UK earning a 81-71 win behind a school-record tying 43 points from Rhyne Howard.

Kentucky players will wear new shooting shirts during pregame warmups against Alabama on Thursday with “Adamstown” on the front. Adamstown was a black community that was placed at the bottom of a hill on what was the edge of Lexington in the 1870s. By 1880 there were 65 black families in the community. Adamstown was on Adams Street, located near what is today Euclid Avenue. The neighborhood moved in preparation for the building of Memorial Coliseum in 1949-50.

Thursday’s game is part of an ongoing year-long celebration of the university’s “70 Years of Integration” series and commemorating 50 years of black studies at UK. The commemoration is sponsored by UK’s Office for Institutional Diversity.

Students can now major and minor in AAAS, opening a world of possibilities in today’s rapidly diversifying, global economy. A background in AAAS gives students an edge in understanding cultural and structural forces. What students learn throughout the program could lead to career opportunities in business, education, communication, medicine, law and politics.

Commemorating integration will feature a series of events, academic courses and special presentations throughout the 2019-20 academic year. Colleges and units from across the campus are involved in creating a year-long calendar of events and programs that will allow UK to reflect on the legacy of Lyman T. Johnson, who became the first black man to enroll at the University of Kentucky, and continue to carry out the conversations he started 70 years ago.