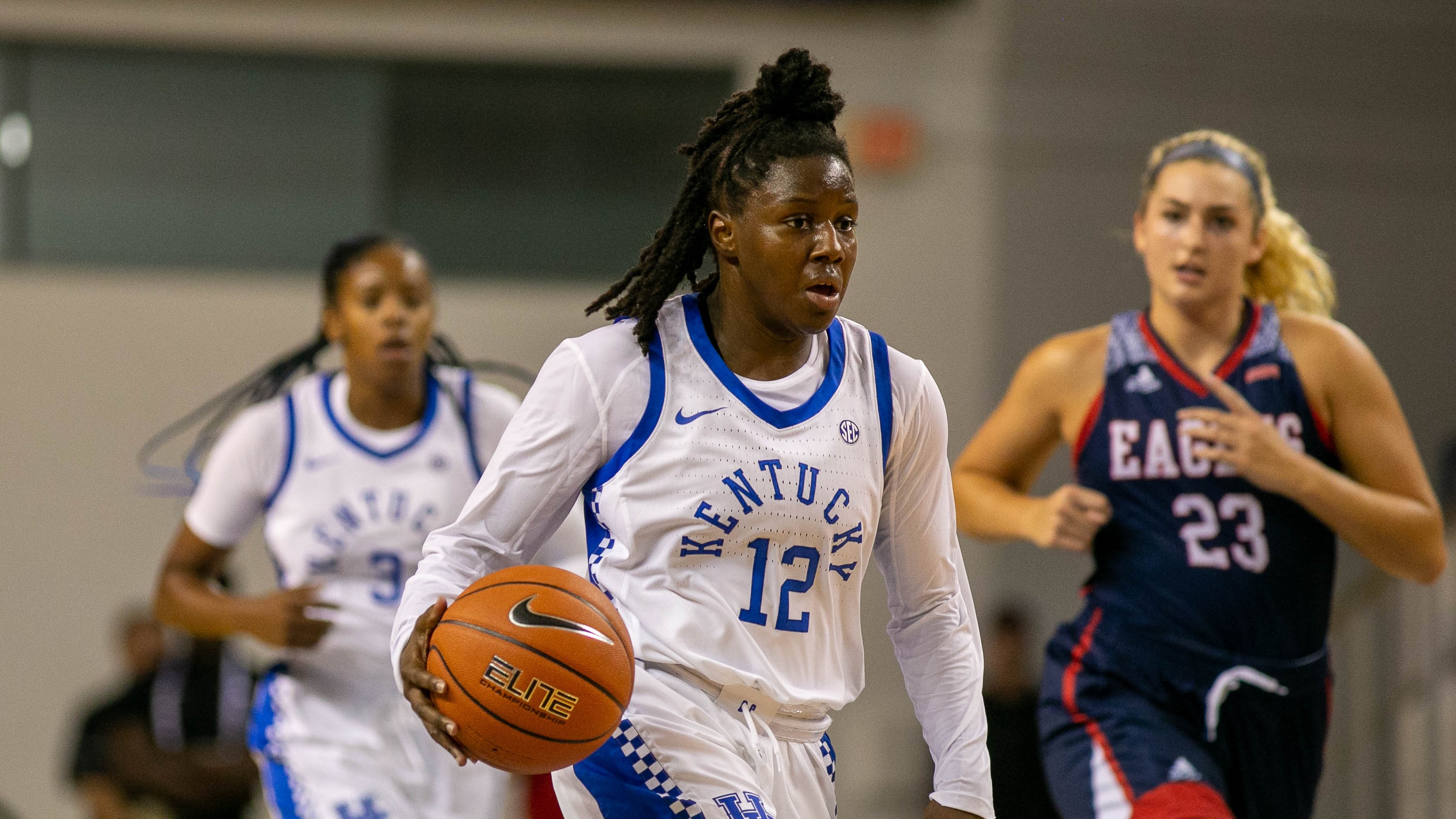 Ogechi Anyagaligbo had 10 points and a team-high seven rebounds for Kentucky. Sophomore standout Rhyne Howard scored nine points for the Cats, who won for the second time in as many chances this season.

Turnovers plagued Kentucky early in the game. The Wildcats had three early miscues, leading to four points for the Blue Raiders, who had an early 5-2 advantage. Middle Tennessee would eventually lead 7-2 before Kentucky got a three-pointer from Haines to cut the lead to 7-5 with 3:12 left in the period.

Kentucky would eventually get within one, at 9-8, on a free throw by Tatyana Wyatt with 1:38 left in the period, but the Cats would trail 10-8 after the first quarter. Kentucky hit just two of its 12 field goal attempts in the quarter (16.7 percent) while turning the ball over six times.

Middle Tennessee would score first in the second period to lead 12-8, but Howard answered with a three-pointer to cut the lead to one again, 12-11. Shortly thereafter, Jaida Roper made one of her two free throws to tie the game at 12 apiece with 8:29 left in the half.

Kentucky’s defense continued to keep Middle at bay, and the Cats finally took their first lead of the game on a jumper from Paschal, giving UK a 14-12 advantage with 6:51 remaining in the half. The Cats would extend the lead to 18-12 on a pair of baskets from Blair Green. Middle Tennessee would get within two, 20-18, but a pair of Paschal free throws gave the Cats a 22-18 lead at the break.

After struggling on offense in the first half, Kentucky came out hot in the second half. The Cats would score the first 13 points of the third period, including big shots by Haines and Howard, to take a 35-18 lead. From there, UK would continue to extend the lead, eventually leading 45-23 on another three-pointer from Haines.

Kentucky would outscore Middle 31-18 in the third period, hitting 13 of their 20 shots in the period, including four of five from behind the arc. Paschal had seven points in the period, and Haines had six.

Middle Tennessee would not go away as the fourth quarter got underway. The Blue Raiders scored the first five points of the period, part of a 15-4 run, to cut the UK lead to 53-41 with 9:25 to play. But Kentucky answered with an 11-2 run to put the game out of reach.

Kentucky returns home on Wednesday to face Stetson at Memorial Coliseum. Tipoff is set for 7 p.m. and the game can be heard on SEC Network Plus.