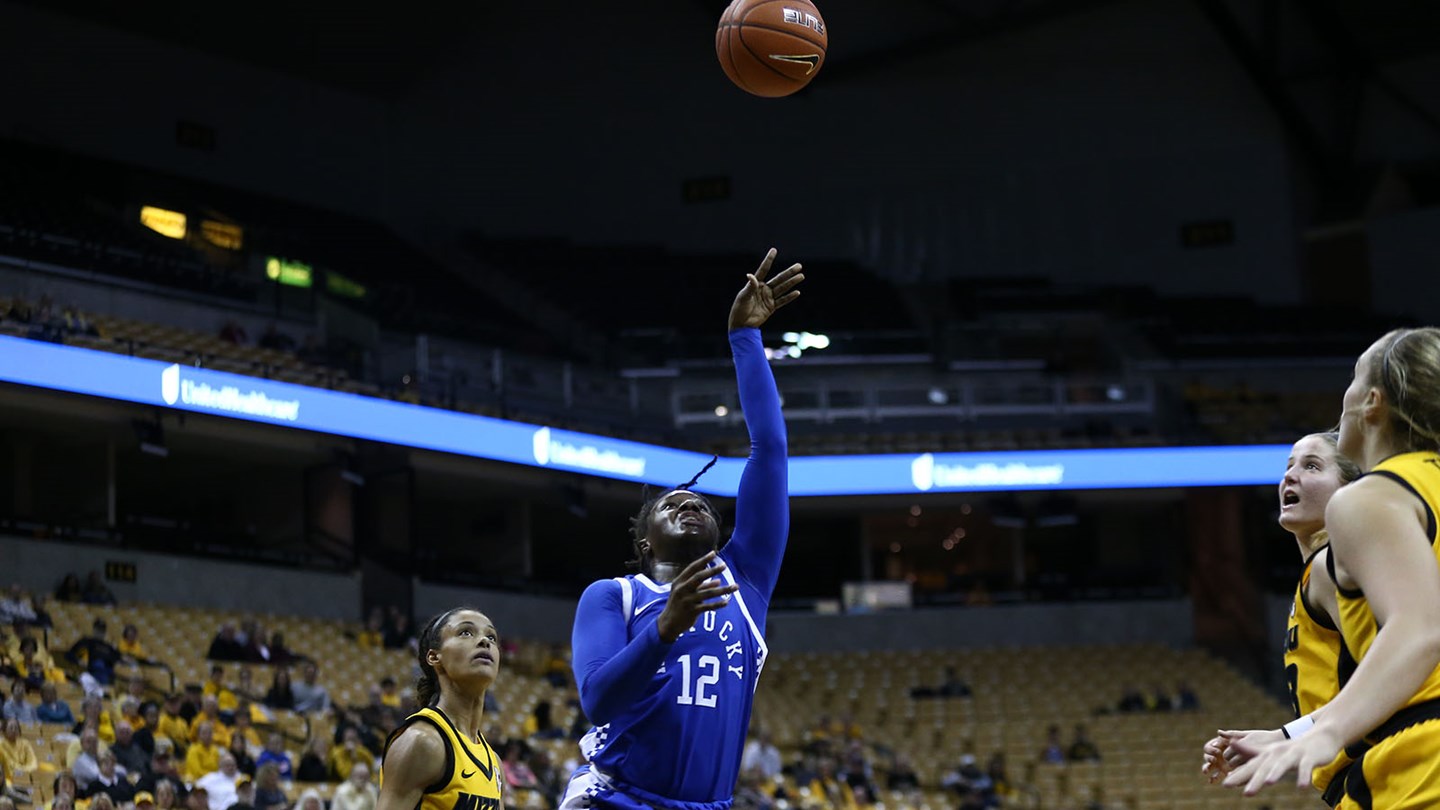 Howard, who averages 23.2 points per game, missed her first game of the season with a fractured finger in her left hand. Howard, who injured the finger in Monday’s win over Auburn, is expected to return in mid-February.

In her absence, it was a total team effort that carried the Cats in Thursday’s win. Amanda Paschal scored a career-high 18 points to lead all scorers in the game. Chasity Patterson had 12 points in the game for the Cats, while Blair Green added 11 to go with a career-high seven rebounds.

Kentucky’s defense was outstanding on Thursday, holding Missouri to 15 of 49 (30.6 percent) from the floor in the game, including just two of 18 (11.1 percent) from behind the arc. Kentucky forced 20 Missouri turnovers and the Cats were able to score 21 points off those miscues.

Missouri scored the first five points of the game before Kentucky got consecutive baskets from Sabrina Haines, Paschal and Haines again to take a 6-5 lead. Later in the period, Paschal would score again, as the Cats took an 8-5 lead while Missouri was missing four straight shots and committing eight turnovers.

Kentucky (17-3, 6-2 SEC) would extend the lead to 11-5 on a left-side three from Jaida Roper with 2:00 left in the period. Missouri would add a pair of free throws, but Kentucky held an 11-7 advantage after one quarter of play.

The Cats came out hot in the second period, hitting their first four shots on the way to a 9-0 run and an 20-7 lead with 7:21 left in the half. Missouri would score four in a row to cut the deficit to 20-11 before the Cats got baskets from Patterson, Roper and Patterson again to extend the lead to 26-11 with 3:58 left in the half.

After a Missouri timeout, Patterson scored again, giving the Cats a 28-11 advantage. The teams would play even for the rest of the half, which ended with a BGreen three that gave Kentucky a 34-17 lead at the break. Patterson had 10 first-half points for the Cats, while Haines had six.

Missouri scored the first basket of the second half on an Amber Smith jumper, but Kentucky answered with a three from Green and a jumper from Paschal to take a 39-19 lead. Later in the period, the Cats would take their biggest lead on a running layup by Roper, which gave UK a 46-25 advantage with 2:28 left in the period. But Missouri would score six in a row to cut their deficit to 46-31 with 20 seconds left in the third. Kentucky would get a free throw from McKinney with two seconds to play in the period, giving UK a 47-31 advantage heading into the fourth.

Kentucky returns to action on Sunday, hosting Florida at Memorial Coliseum. Tipoff is set for 1 p.m. ET and the game can be seen on the SEC Network.