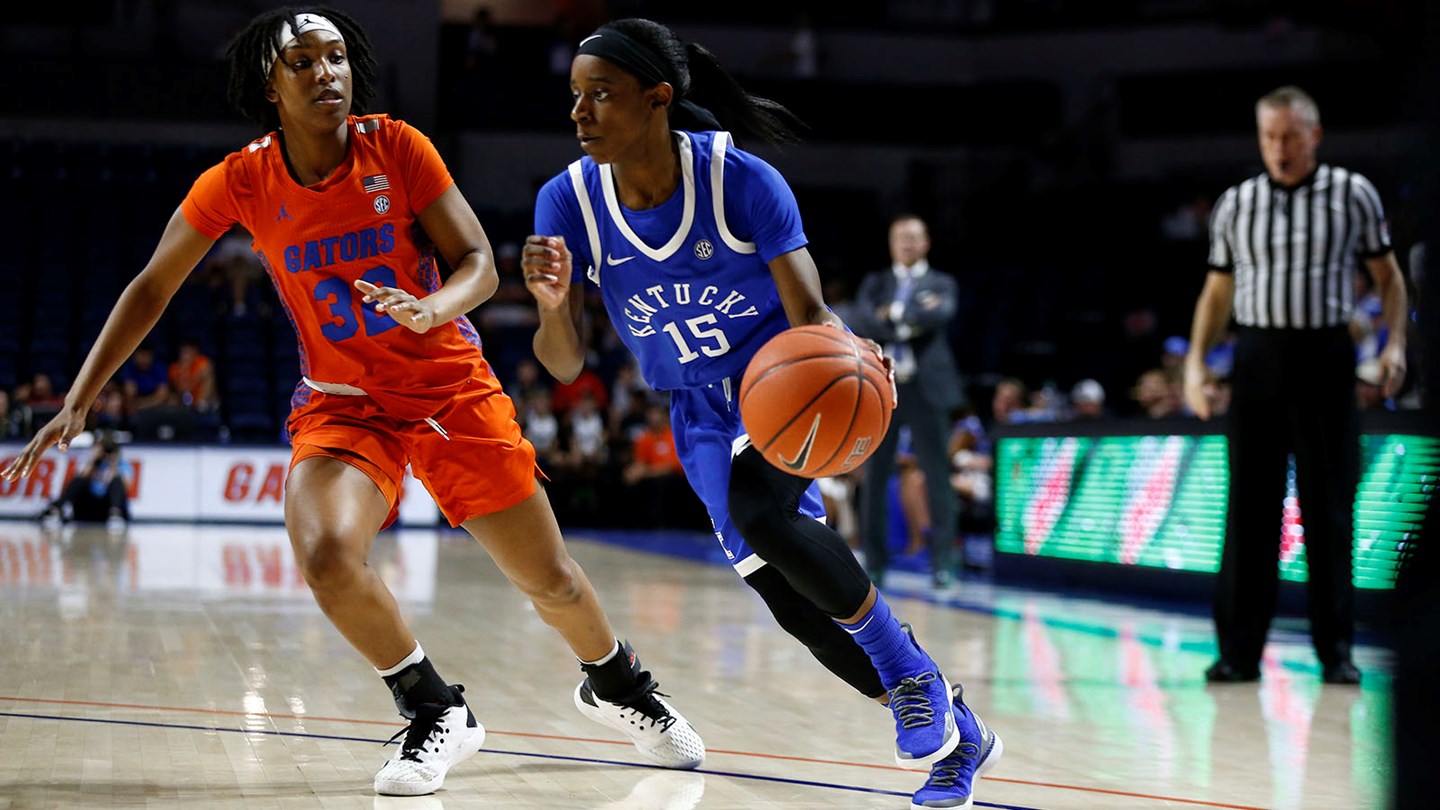 GAINESVILLE, Fla. – Rhyne Howard scored 18 of her 22 points in the second half as the 14th-ranked Kentucky women’s team beat Florida 65-45 on Sunday at the O’Connell Center.

For Howard, it was her sixth straight game with 20 points or better. The sophomore entered Sunday’s game as the top scorer in the SEC and the third-leading scorer in the country. She came up just short of her 23.9 points per game average on Sunday.

Chasity Patterson scored a career high 20 points for the Cats, adding five rebounds and two assists in the process. Senior Sabrina Haines added 12 for the UK.

Kentucky (14-2, 3-1 SEC) dominated the turnover battle on Sunday. The Cats forced 25 turnovers and converted those into 31 points. Meanwhile, the Cats only turned the ball over six times, leading to five Florida points. The Cats also held a 15-5 edge in fast break points and a 13-5 advantage in second-chance points.

Kentucky missed its first five shots of the game but trailed only 2-0 early. Jaida Roper got the Cats on the board with a wing jumper, tying the game at 2-2. After Florida took a 4-2 lead, Patterson hit a wing three to give the Cats a 5-4 lead. But that advantage lasted just 19 seconds, as the Gators got a basket from Ariel Johnson to take a 6-5 lead.

Howard scored her first points on a pair of free throws with 3:21 left in the first period, giving UK a 7-6 advantage. The Cats would extend the lead to 10-6 on a three from Haines. Kentucky would take an 11-8 lead on a free throw by Amanda Paschal, then Patterson got a steal and layup to give UK a 13-8 advantage. But the Gators would score the last four points of the period to cut UK’s lead to 13-12 after 10 minutes of play.

The second quarter started in a similar fashion, with the Cats missing their first five shots. Florida took a 15-13 lead before Howard converted a layup to tie the game at 15 apiece. Kentucky took a 16-15 lead on a free throw by Ogechi Anyagaligbo with 7:03 left in the half, but the Gators got a three from Kristina Moore to re-take the lead, 18-16, with 5:36 remaining in the half.

Kentucky tied the game on a Patterson layup with 4:14 left in the half. But Florida scored the next three points to lead 21-18. That’s when Kentucky put together an 8-0 run, sparked by two three-pointers from Patterson, to lead 26-21. Florida got a basket from Lavender Briggs with eight seconds to play in the half, but Kentucky got a pair of free throws from Paschal just before the end of the half to make the score 28-23 at the break. Patterson led all scorers with 13 points in the first half.

In the third quarter, the teams traded baskets to start the period. But from there, Howard got hot, scoring seven straight for the Cats and giving UK a 37-26 lead. Florida answered with six straight points, including five by Kiara Smith to cut the deficit to 37-32. But the Cats answered with a pair of free throws from Haines and a jumper by Patterson to lead 41-32. Kentucky would lead 42-34 after three periods of play.

Starting the final 10 minutes of play, it was Kentucky that jumped out early. The Cats got a three from Paschal and a basket from Howard to lead 47-34. After Florida got a basket, Howard scored four straight and the Cats would continue to stretch the lead, with the final margin being the biggest lead of the game.

Kentucky returns to action on Thursday, hosting No. 10 Texas A&M at Memorial Coliseum. Tipoff is set for 6:30 p.m. ET and the game can be seen on the SEC Network.