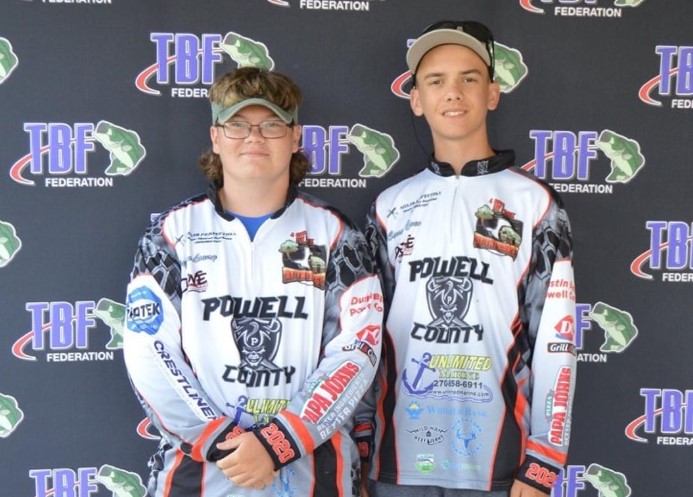 Roughly $3 million in scholarships and prizes were given away throughout the week.

Carson Ewen and Daylan Lowry, members of the Powell County High School bass fishing team, recently traveled to Lacrosse, Wisconsin, to compete in both the TBF (The Bass Federation) High School Fishing World Finals and National Championship. Ewen and Lowry became the first Powell County students to advance to national competition in program history. As a team, they placed 79th out of 194 in the national championship and 116th out of 312 in the world finals. Head coach Julie Clark and her coaching staff were pleased with their performance.

The sport of bass fishing at the scholastic level is very much on the rise. Kentucky, which held their first-annual KHSAA State Bass Fishing Championship in 2013, was the third state to declare bass fishing a varsity sport. As an official varsity sport, bass fishing teams must adhere to KHSAA rules, such as dead periods, maintaining certain academic standing, etc.

Ewen and Lowry were both taught to fish at a very young age. When Powell County started their program in 2016, Lowry was particularly enthusiastic. He said, “I love to hunt and fish, and once I figured out that they were going to make a sport out of that, and I could possibly make a living out of this, I got really excited.” Ewen was initially drawn to the bass fishing team by his older brother, Palmer Ewen, and quickly embraced the challenge that bass fishing presents.

Competitive bass fishing is more grueling, physically draining, time consuming, and complicated than one might think. It’s a lot different than a casual day of fishing with friends. Ewen and Lowry’s schedule during the tournament included waking up at 3:00 a.m. and standing on their feet for 6-8 hours while fishing. After they weighed their fish, they returned to the hotel to prepare for the next day. The tournament was also challenging for assistant coach Robert Curtis and Barry Ewen, the boat captain. They stayed up late each night in order to produce the team’s plan for the upcoming day of fishing, while still waking up at 3:00 a.m. the next morning.

Tournament fishing can be quite challenging, especially when it is done day after day. This difficulty leads head coach Julie Clark to stress to her team the importance of hydrating before each tournament and practicing fishing in order to properly handle the tough conditions.

The team tournaments were held from June 23-27. The basic rules were that teams:

Going into the tournament, one of Ewen and Lowry’s goals was to catch the maximum limit of three fish each day. They were able to accomplish that goal. Coach Curtis, one of several people who accompanied Daylan and Carson to Wisconsin, was quite pleased with their performance: “It impressed me; I was really proud of them.”

The PCHS bass fishing team, which is made up of 22 members, is one of the youngest teams in the state. In fact, Ewen and Lowry qualified for the national championship as eighth-graders who will enter PCHS this fall.

BSN congratulates Carson and Daylan for their outstanding performance, and wishes them the best of luck in the future.