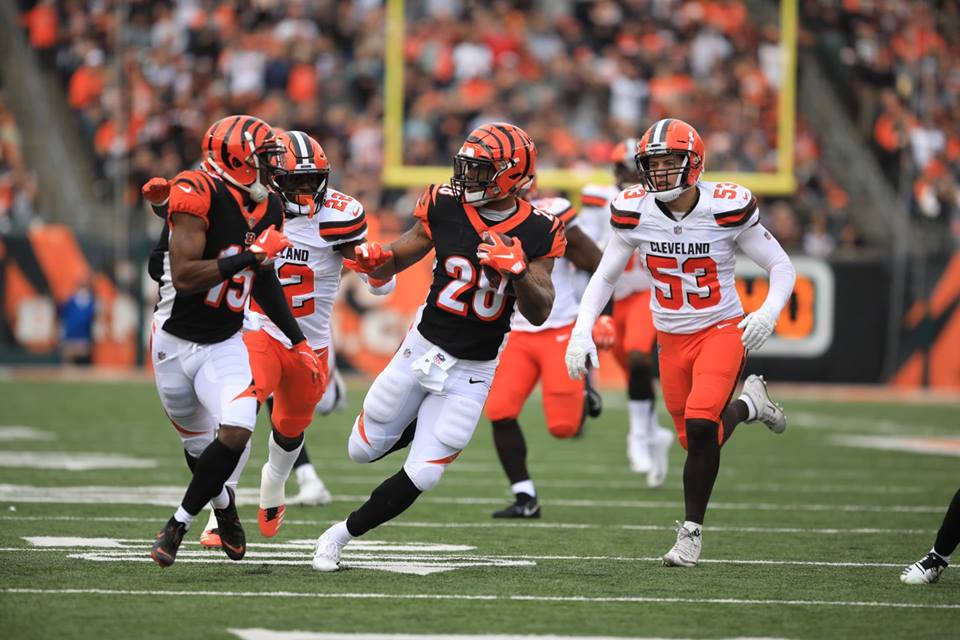 (CINCINNATI, Oh.) – In this season of Thanksgiving, as far as football is concerned, Bengals fans don’t seem to have much to be thankful for. A 35-20 beatdown by divisional rival Cleveland has everybody scratching their heads. With the loss, Cincinnati not only essentially eliminates itself from playoff contention, but also continues its free fall as laughingstock of the league. Like I said, the gratitude cup isn’t necessarily overflowing.

Don’t get me wrong, I’m not looking to win the Super Bowl. (OK—maybe just once in the half century of franchise existence would be nice.) I’m just looking for respectable seasons where coordinators aren’t replaced like used paper towels, where 4-1 starts don’t disintegrate into 6-10 finishes, and where management doesn’t continually settle for mediocrity. I don’t want my defense setting modern day era records by yielding over 500 yards in three straight games. I don’t want to have to pin all my false hopes on Hue Jackson returning as assistant coach and savior. I don’t want to expend my heart and soul cheering for a team that I know will not reciprocate.

How ugly was it at Paul Brown Stadium on Sunday? It was butt ugly. Granted, the Bengals defense resembles a MASH unit—but they couldn’t stop my grandmother. The game was essentially over by halftime as the Browns moved the ball up and down the field with impunity to the tune of a 28-7 lead. Browns rookie quarterback Baker Mayfield looked like Otto Graham—directing his team to 296 total net yards in the first half alone. Predictably, boos cascaded from the stands as fans filed out in droves—an understandable mass exodus back into their fantasy world of Super Bowl dreams.

This Battle of Ohio ended in unconditional surrender. Cincinnati waved the white flag early, relinquishing their starting quarterback (Andy Dalton left the game in the 3rd quarter with a thumb injury), their pride, and maybe even their head coach. Mayfield ended up 19-26 for 258 yards and 4 touchdowns on the afternoon.

When pressed on the slow start, Coach Marvin Lewis was predictably exasperated. “I think I’ve said it both three or four times over, it’s a matter of guys got to relax and do their jobs,” he said. “Just execute your assignment…We got to bear down. We got to bear down and relax. We don’t have to press. We just got to bear down and relax and get it done. I got to do my job. We got to do a better job. I got to prepare them better. They got to go out and they have to execute their jobs better. It rests squarely on me.”

Now that’s a scary thought. Despite the carnage, fans should remain ever thankful. It’s still just a game—a pleasant distraction and temporary respite from the grind of everyday life. Plus, it’s more than just the football game itself. I’m thankful for tailgating, for the smells and tastes of burgers and brats on the grill, for opportunities for fellowship with like-minded fans. I’m thankful for Marlana Vanhoose belting out a rendition of the National Anthem as only she can, while a packed stadium of 56,122 listens on in awe. I’m thankful for the opportunity to watch the game in climate-controlled comfort while snacking on a smorgasbord of gourmet delights.

A prominent sign displayed in the upper deck of the stadium said, “PLAY HARD and HAVE FUN.” The Bengals did neither today, but Bengals fans everywhere—despite their team’s turmoil—do manage to play hard and always have fun. I’ll add one more phrase to the banner up high—BE THANKFUL. After all—even as a Bengals fan—it is the season of Thanksgiving.