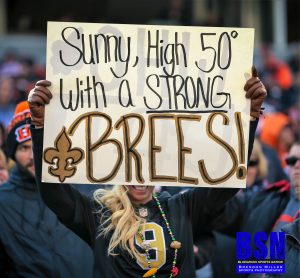 It was a monumental task for the Bengals. They came into the game on pace to break the single season record for most yards given up defensively.  Definitely not the best time to play a future 1st ballot Hall of Famer in Drew Brees who has set just about every passing record the NFL has.  If that wasn’t tough enough, the Saints have a two-headed monster behind Brees in Mark Ingram and Alvin Kamara.

The game started just as expected with the Saints driving 75 yards in 15 plays. The drive culminated on a 7 yard touchdown pass from Brees to his favorite target Michael Thomas. Coming into this week Thomas was second in receptions at 70. The drive took 8 minutes off the clock and New Orleans took the lead 7-0.

The Bengals offense gave the Jungle hope with their opening possession, by taking the ball 75 yards on 8 plays.  Andy Dalton matched Brees with a touchdown pass of his own when he connected with John Ross on a two yard strike in the corner of the end zone. Cincinnati drew even 7-7.  That is how we ended the first quarter.

Just like a boxing match, the Saints answered the bell on their next possession.  It took just 6-plays for the Saints to go 75 yards, scoring on a 27-yard screen pass to Mark Ingram. T hat would be the first of 4 touchdowns by the Saints in the second quarter.  Andy Dalton would gift wrap one of those scores giving the Saints a short field by throwing an interception deep in the Saints territory.  On the very next play Brees connected to Michael Thomas for a 16-yard touchdown.  Drew Brees proved why he is a candidate for league MVP by throwing for 214 yards and 3 touchdowns in the first half.  His passer rating was 150.8!  The Saints ended the first half with a dominating lead 35-7.

The Bengals coming out for the second half needed to put points on the board to give themselves a chance.  Instead, the Bengals’ offense would pick up right where they left off…abysmal. The Saints on the other hand, kept their foot on the throttle scoring a total of 51 points. The Saints didn’t punt in the game, and scored at least a field goal on each of their offensive possessions.

The Bengals would add one more score when back up quarterback Jeff Driskel faked a hand off and took it to pay dirt from 27-yards out to set the the final score 51-14.  Andy Dalton finished with 153 yards passing on 12/20 passing.  He had 1 touchdown but threw 2 interceptions.

Coming in the Bengals needed a huge game from Joe Mixon.  Mixon finished with 61 yards on just 11 carries.  He added 24 yards on 2 receptions.  The Bengals offense was on the field for 20:14 and amassed 284 yards.  The Saints offense on the other hand ripped off 509 yards and were on the field for 39:46.  Brees finished with 265 yards and 3 touchdowns on 22/25 passing.  Kamara and Ingram combined for 160 yards and 2 touchdowns on 25 rushing attempts.  Ingram and Kamara added 104 yards and 1 touchdown on 7 receptions.  Michael Thomas added 8 receptions bringing his season total to 78. Those 8 receptions went for 70 yards and 2 touchdowns.

In a lopsided loss the Bengals have left the fans with a lot of questions.  With the defense on pace to break records for being the worst in franchise history, Coach Marvin Lewis was asked if changes would be made to the coaching staff, “I’m not going to answer that. We haven’t even had time to reflect on the game.” Something has got to change for the Bengals to be successful.  Having a stud running back and not being able to use him isn’t going to win many games.  When you are losing 45-7 and you are still dancing and smiling, then the problems go much further than what happens on the field.  The culture inside the locker room has got to change for the Bengals to be successful.  That falls directly on the shoulders of Coach Lewis.  If your team is ok with getting trounced on their home field, then maybe changes need to be made from the top down.