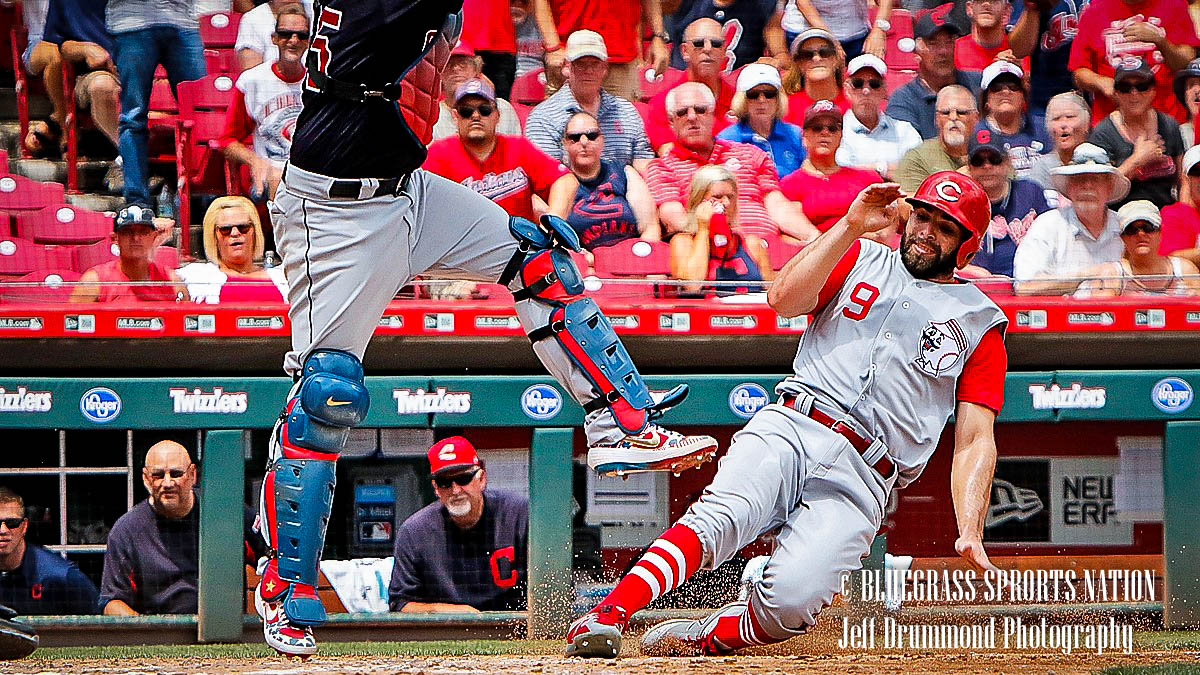 CINCINNATI – July 7, 2019 – Jeff Drummond – Much like Sam and Diane in the classic days of “Cheers,” or perhaps Ross and Rachel for the “Friends” generation, the Reds continued to tease fans with their will-they-or-won’t-they routine in the week heading into the All-Star Break.

After taking three out of four games from NL Central-leading Milwaukee to begin the week — an impressive feat coming on the heels of knocking previous division leader Chicago from atop the standings — Cincinnati resumed its fandango with mediocrity by dropping both games of the mini-series against Cleveland on Saturday and Sunday.

The weekend’s first game was competitive for the most part before the Indians broke it open with five runs in their final two trips to the plate to win 7-2. On Sunday, the Reds were not remotely competitive — with the exception of the throwback uniform effort — falling 11-1 in a fashion that did not do justice to the 1956 slugging Cincinnati squad they were honoring in sleeveless vest style.

It leaves a Reds fan scratching one’s head as he or she mulls the team’s position entering the second half of the season.

On the one hand, Cincinnati has been an entertaining team. Many national observers suggest it might be the most entertaining last place club you will come across. On the other hand, the Reds are what their record says they are: 41-46, five games under the .500 mark, in last place. Again.

The good news is, both the Brewers and Cubs also lost on Sunday, so the Reds remain within striking distance at 4.5 games back.

The frustrating part is Cincinnati has not been closer than two games under .500 since June 21, despite some nice stretches of baseball which, not coincidentally, always seem to be followed by a letdown. That two- to three-game under mark seems to be the Reds kryptonite, or perhaps more simply, what they really are.

It’s a tough pill to swallow for Reds fans who have been craving a winner since 2013. It’s been a long, painful rebuild, and this was supposed to be the year Cincinnati started moving back in the right direction.

If you’re like me, you’re having an inner debate with yourself. The heart says one thing, the head is a contrarian.

The heart says Cincinnati’s starting pitching has been out of this world and should keep David Bell’s club in the hunt throughout the season. Luis Castillo has emerged as one of the NL’s best hurlers, fellow All-Star Sonny Gray is starting to match him, and many teams would like to have 3-4-5 options like Tanner Roark, Anthony DeSclafini, and Tyler Mahle. Their combined 3.57 ERA ranks second only to the Dodgers’ 3.01 in the league.

The head says they’ve experienced really good fortune with no injuries to the starting rotation, with the exception of Alex Wood, the major acquisition from the Dodgers who has yet to take the mound this season due to a back problem. If any of those other guys — baseball gods forbid, Castillo — run into a stint on the IL, it could all unravel in a hurry.

The head says the whole has not been more than the sum of the individual parts. The Reds are next-to-last in the NL in batting average (.236 entering Sunday’s game), 12th in on-base percentage (a paltry .307) and next-to-last in runs scored despite playing in one of the league’s most hitter-friendly parks.

The heart says the bullpen has put up the NL’s second-best ERA (3.87) with solid first-half performances by Amir Garrett, Michael Lorenzen, David Hernandez, and the resurgent Raisel Iglesias.

The head says the pen is showing signs of overuse of late. Cleveland scored five in the last two innings on Saturday; the Tribe pounded the Cincinnati pen on Sunday for 10 runs after Mahle exited in the fifth inning. The Reds are currently playing without a left-handed reliever after placing Garrett on the 10-day IL, and the results have not been pretty.

In order to be a legit contender in the second half, the Reds will likely need another bat (or two) and at least two more arms (one being a competent lefty). That will cost a lot. The heart may suggest go for it, be buyers. The head is singing a different tune, continue on the sell path and keep adding young talent for the future.

Nobody wants to hear that when you’re just 4.5 games back, though.