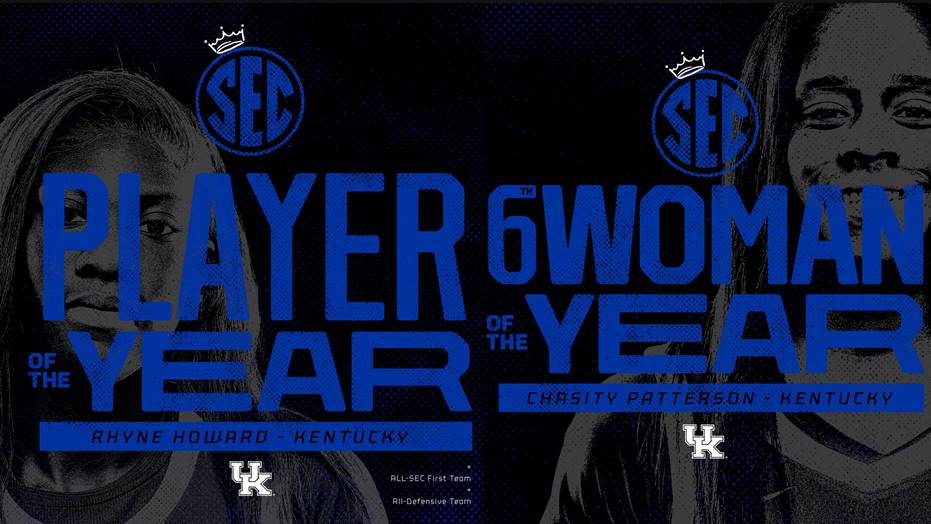 Howard was tabbed the SEC Player of the Year, All-SEC First Team and SEC All-Defensive Team while Patterson was named the SEC 6th Woman of the Year. Howard becomes the third player in program history to win the league’s top honor joining Victoria Dunlap and A’dia Mathies while she is the first UK player to accomplish the feat as a sophomore. Last year, Howard was SEC Freshman of the Year and All-SEC First Team. This is the first league honor for Patterson, who joins Keyla Snowden and Jennifer O’Neill as the only UK players to claim the 6th woman of the year award.

Howard has had a sensational sophomore season for Kentucky, leading the Wildcats and ranking third nationally with 23.3 points per game. The guard also leads UK with 6.4 rebounds per game and 58 steals, while she is second on the team with 27 blocks and third on the team with 60 assists. Howard has hit 77 3-pointers this season, which ranks second most in program history, needing just four more makes from 3 to tie the program record set by Sara Potts in 2004-05. Howard’s 23.3 scoring average is the most for a UK player under Matthew Mitchell and the fourth-best average in program history.

The native of Cleveland, Tennessee, has been named SEC Player of the Week four times this season and was espnW National Player of the Week in early January. Howard is on nearly every national player of the year watch list this season. Most recently, she was named one of 10 semifinalists for the 2020 Citizen Naismith Trophy. She has also been tabbed a finalist for the Cheryl Miller Award, which annually honors the best small forward in women’s college basketball, John R. Wooden Award Late-Season Top 20 and Dawn Staley Award Midseason Watch List, establishing her as a top candidate for national player of the year.

After missing the first half of the season due to NCAA transfer rules, Patterson has been a force for the Wildcats off the bench in league play sitting second on the team in scoring at 11.4 points per game while she has 22 steals and 28 assists. In 17 games played, she has scored 10 or more points in eight games, including 15 or more points in six games. The native of Houston, has three 20-plus point performances – all in league play – scoring 20 points at Florida, 25 points vs. Florida at home and a career-best 32 at Arkansas hitting a career-best five 3s. Patterson has two or more steals in six games and has led UK in steals four times while she has led UK in scoring twice, rebounding once and assists five times. The speedy guard hit at least one 3-pointer in 12 of her 17 games played including two or more from long range in four games.

On top of her 20-plus point performances vs. Florida and at Arkansas, Patterson shined with 15 points at South Carolina and led UK with two assists and three steals. She also scored 15 points vs. Mississippi State, going 6-of-11 from the field and 3-of-4 from the line. She followed that performance with 15 points at Ole Miss adding two 3s and a season-best five assists.

Kentucky ended the regular season with a 21-7 record and earned the No. 3 seed in this week’s SEC Tournament. The Wildcats will receive a double bye in the event and play either Ole Miss, Missouri or Tennessee in the quarterfinals at approx. 8:30 p.m. ET Friday night. The game will be televised on SEC Network. Full SEC Tournament information can be found on secsports.com.