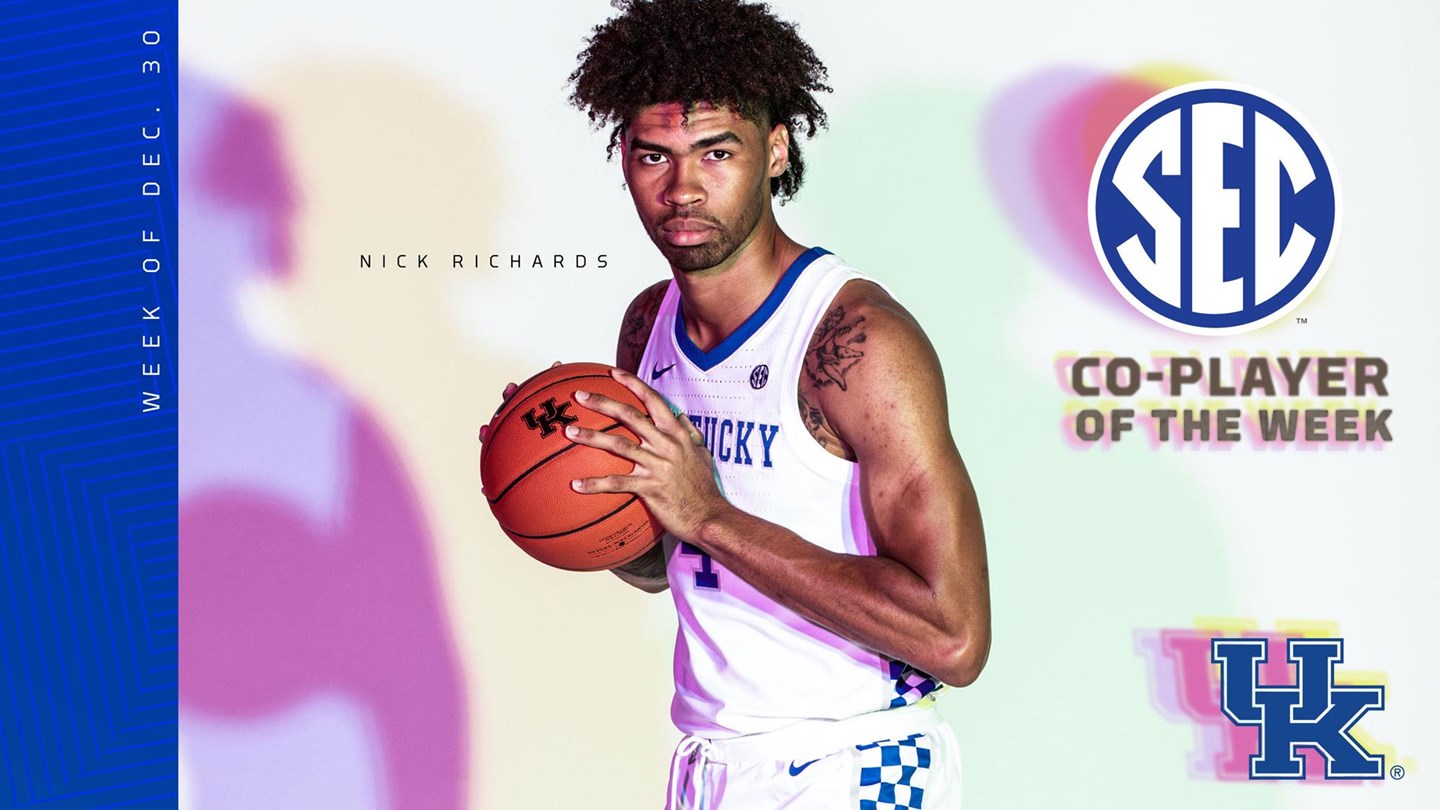 Kentucky duo was instrumental in the Wildcats’ victory over No. 3/4 Louisville on Saturday

BIRMINGHAM, Ala. – After playing leading roles in another signature victory over archrival Louisville on Saturday, Kentucky men’s basketball players Nick Richards and Tyrese Maxey were awarded national and conference honors on Monday.

Maxey scored a game- and career-high 27 points with career-high-tying numbers for 3-pointers (four) and rebounds (seven), and Richards notched a double-double with 13 points and 10 rebounds, including scoring seven straight points in overtime with the game on the line.

The national honor for Maxey is the first for any Wildcat this season. It’s Richards’ first career SEC honor and Maxey’s second. Maxey won the season’s first SEC Freshman of the Week award after scoring 26 points in the victory over then-No. 1 Michigan State in Madison Square Garden in early November, his college debut.

Kentucky has dominated the weekly SEC awards under Calipari. UK has won more weekly SEC honors (103) than any other school during the Calipari era, including 82 SEC Freshman of the Week honors and 21 SEC Player of the Week awards.

In a rivalry that features so many standout performances, the efforts by Richards and Maxey in Saturday’s 78-70 overtime classic are among the most memorable.

Richards logged his team-leading fifth double-double of the season and the sixth of his career, but it was his steady post presence throughout the game, his rim protection and his surge in the extra period that made the biggest impact.

The junior from Kingston, Jamaica, picked up his fourth foul with 14:31 remaining in the second half and UK leading by double figures. In the nearly seven minutes he was forced to the bench, Louisville took a 46-45 lead until he re-entered at the 8:53 mark.

Against one of the best frontcourts in the country, he played most of the final 8:53 of regulation and all five minutes of overtime without picking up his fifth foul to anchor Kentucky’s inside game. During that stretch he took two momentum-changing charges and scored seven straight points in overtime. Kentucky needed every one of them.

With Louisville leading 68-65 with 2:21 to go in overtime, Richards snared an offensive rebound (one of six in the game) and converted the traditional three-point play to even the score once again. His free throws with 27 seconds remaining gave the Wildcats a 72-70 lead they would not relinquish.

Richards also drew a game-high 11 fouls to get Kentucky to the free-throw line, a key difference in the outcome. UK made 21 of 25 at the line while Louisville made just 9 of 20.

Entering the game in a 3-point shooting drought – he had made just one of his last 16 attempts – Maxey went 4 for 5 against the Cardinals from behind the arc. His nine made field goals are a career high, and his seven rebounds tied a career best. Thirteen of his points came in the opening half thanks to three 3-pointers.

Maxey was named the Bluegrass Sports Commission Most Valuable Player for his performance.

The freshman guard out of Garland, Texas, has played his best against the best. In three games this season against ranked foes, Maxey is averaging a team-high 22.7 points, 6.0 rebounds and shooting 53.8% from the field and 44.4% from 3-point range.

The Wildcats return to action on Saturday vs. Missouri in the SEC opener for both teams. Tipoff is set for 2 p.m. in Rupp Arena on SEC Network.

Kentucky was picked by the media to win the league for a 49th time.