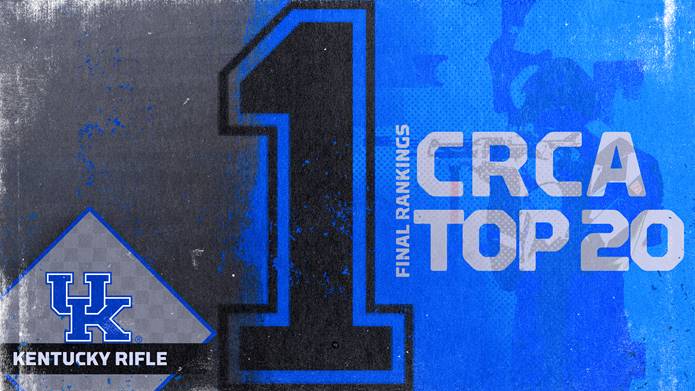 LEXINGTON, Ky. – It was a flawless season for the University of Kentucky rifle team, finishing the year undefeated and winning both the Great America Rifle Conference regular-season and tournament championships. The final accomplishment came Thursday as the Wildcats finished the season ranked No. 1 in the final Collegiate Rifle Coaches Association Top 20 ranking.

During the season, Kentucky bested its previous school-record aggregate score of 4719 a total of four times, including the nation’s best overall score during the year of 4734 at Army on Jan. 19. UK also surpassed the previous school record with a 4724 vs. Memphis at home on Feb. 1 followed by back-to-back 4723s in a win at West Virginia on Feb. 15 and during the NCAA Qualifier in Lexington on Feb. 22.

Overall, UK not only had the highest team aggregate score in the nation this season of 4734 but scored above a 4715 an impressive six times while the rest of the nation combined to score over 4715 eight times. In fact, Kentucky had four scores of 4720 or better this season while there was only one other team in the country to eclipse the 4720 mark.

Tucker and Shaner, who each qualified for the four-member Team USA Air Rifle Olympic Team earlier this year, combined to post eight of the nine smallbore scores of 593 or better this season while they also combined to earn six of the eight 599s that were scored in air rifle this season. Tucker and Shaner were the only two NCAA shooters to post an aggregate score of 1190 or better this season, with Tucker doing it seven times while Shaner did it twice.