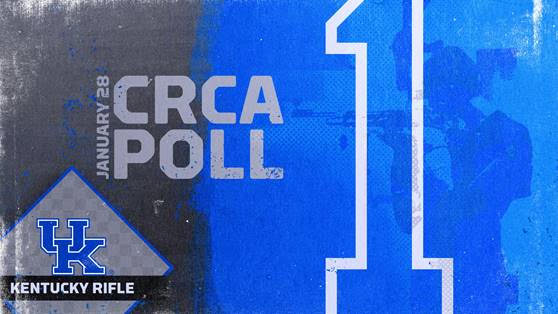 LEXINGTON, Ky. – After a strong start to the spring season, the University of Kentucky rifle team has moved up to the top spot in the latest College Rifle Coaches Association Top 20 poll, which was released Monday.

“We are very humbled about having the honor of being ranked No. 1 for this week,” UK head coach Harry Mullins said. “I feel the team has done a great job this spring and it is very exciting to have this honor. We are looking forward to being back in front of our home fans this weekend when we host Memphis.”

The ranking comes after the Wildcats have performed well in their first four matches of the 2020 calendar. The most impressive performance during that stretch was UK’s 4734 team aggregate score on Jan. 19 against Army. The high mark was a school-record score for the Wildcats and bested TCU’s 4732 for the top score in the nation this season. UK prefaced the high score with a 4715 team aggregate against NC State followed by a 4711 score last weekend in the Withrow Open.

UK will return home for a dual match with No. 6 Memphis on Saturday starting at 9 a.m. ET. The match will be held at the UK Rifle Range in Barker Hall on campus. Admission is free. After the home match, UK will travel to Morgantown, West Virginia on Feb. 15 for a dual match with the No. 3 Mountaineers before hosting a NCAA Qualifier on Saturday, Feb. 22.

This season’s GARC Championships will be in Memphis, Tennessee, on Feb. 28-29. Kentucky will play host to the 2020 NCAA Championships in Memorial Coliseum on March 13-14.