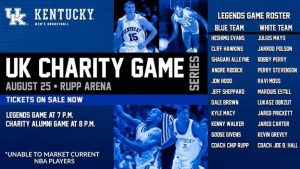 Per NBA rules, the University of Kentucky cannot confirm any current NBA players participating in the exhibition games.

The Legends Game will be split into the following two teams. Chip Rupp, grandson of legendary UK coach Adolph Rupp, will coach the Blue Team and former UK coach Joe B. Hall will head up the White Team.

Tickets for the both UK Alumni Charity Game and the Legends Game are currently on sale. All seats are reserved and priced at the following rates: