Russell County Rushing Attack Too Much for Perry Central 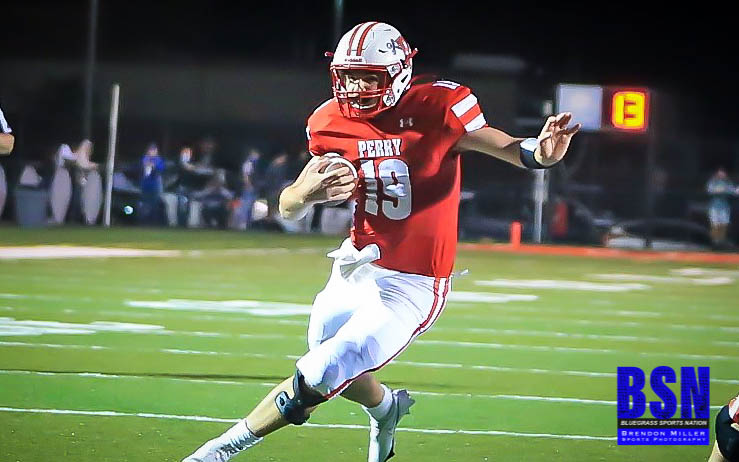 Perry County Central continued the 2020 gridiron campaign hosting the Russell County Lakers.  Tonight’s game was scheduled earlier in the week as COVID-19 forced another team Williamsburg who is also listed as a red county to cancel tonight’s game.  Perry County Central had little time to prepare for the 5-0 Lakers’ team.  Entering the game Perry Central was on a two-game winning streak defeating District opponents Clay and Harlan County in consecutive weeks and had an overall record of three wins and four losses.

The game tonight started out with two scoring possessions within the first minute of the game.  Perry Central received the ball on the opening kickoff.  On the Commodores opening offensive play of the game, the Commodores fumbled the ball, with Russell County recovering at the Perry Central twenty- yard line.  The next play Russell RB #6 Collin Darnell scored on the twenty-yard TD run and led Perry 7-0.  On the ensuing kickoff, Kobee Eldridge received the ball had room to run, made a couple of defenders miss and tied the game at seven with the kickoff return.

The game tempo slowed down after the up-tempo starts by both teams.  Perry went three and out on the next possession and was forced to punt.  Russell County received the ball and began their offense at the Russell County twenty-yard line.  Russell gave the ball to RB Darnell and used his quickness to get down field and scored the ball on an eighty-yard rushing touchdown.  At this point Darnell ran the ball two times and had already reached the 100-yard rushing mark on the night and was off to an unbelievable start.  Perry finally started to get a flow to their offense and had a drive that reached the RedZone with a great run by Elijah Garyheart.  The Doore’s threating to tie the game had an excited crowd and a fresh set of downs to complete the drive.  Perry drove the ball to the four- yard line and faced a fourth and long, so Perry goes for the FG, but was unable to convert.  Russell County goes back to the Explosive RB Darnell who continued to gash the Doores for big offensive gains, with a run of over seventy yards and finished the quarter with another rushing touchdown, his third of the night.  At the end of the first quarter Russell County led Perry County Central 21-7.

As explosive as the first quarter was, the second quarter was more of a defensive battle and no scores occurred in this quarter.  Perry County Central began to get in the backfield and was more aggressive tackling.  While Darnell still picked up some first downs running the ball, the Commodore defenders closed the gaps and delivered some big hits by Kobe Eldridge and other defensive backs.  The Laker’s were forced to punt on a few possessions.  Offensively Perry Central also struggled to move the ball resulting in Punts. At the half, the game remained a two- touchdown lead for Russell County.  Russell County 21- Perry County Central 7.

Perry County Central continued to play great defense as the defensive back’s got in the backfield and closed the gaps on Darnell.  In the third quarter Perry Central cut the lead with a hard run by Cade Miller.   Early in the third quarter Miller busted through the line and had a running lane, Miller scored the ball with a fifty-yard rushing play.  The Commodores now trailed Russell County 21-14 and was playing with confidence.  The fans were ecstatic with excited fans and the Doore’s began to play with confidence.  Perry stopped Russell County again from scoring in the quarter and the score remained Russell County 21- Perry 14 entering the fourth quarter.

Next week the Commodores are scheduled to conclude the regular season hosting the Rockcastle County Rockets.  The game could be in Jeopardy of not happening as the KY Governor Andy Beshear recently recommended Counties that are in the Red due to the COVID-19 Pandemic should go back to virtual school for the coming weeks and advised against any gatherings including sporting events.  As of today Friday, October 30, 2020 Perry County is listed as a county in the red and there is a strong possibility the game next week may be postponed.  Perry County Schools Superintendent Johnathan Jett will likely make the decision sometime next week.

Perry County Central drops on the season to an overall record of three wins and five losses. If Perry gets to play next week, the Commodores could create some momentum and confidence going into the playoffs.  Perry is scheduled for a rematch game hosted by district opponent the Letcher County Cougars in the opening week of the playoffs.  Letcher County Central defeated Perry 28-7 in week three of the season.  Russell County improved to 6-0 on the season.  Russell County concludes the season next week on the road taking on Taylor County.