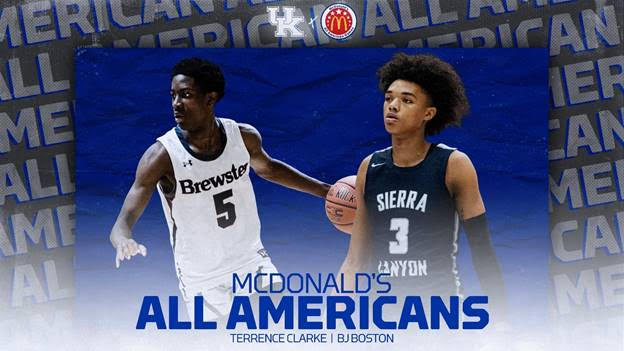 LEXINGTON, Ky. – The Kentucky men’s basketball team’s 2020 signing class will be well represented at the 2020 McDonald’s All American Game.

Fall signees BJ Boston and Terrence Clarke are the latest “burger boys” who will play in the prestigious all-star game before heading to UK next season. They were named the 24-man rosters announced Thursday on ESPN’s “The Jump” on ESPN.

UK is one of three schools with multiple selections.

This 43rd edition of the game is set for April 1 at the Toyota Center in Houston. Tipoff is set for 7 p.m. on ESPN2.

UK’s current signing haul, which also includes Devin Askew, Cam’Ron Fletcher, Isaiah Jackson and Lance Ware, is going to be in the mix for one of the top classes in the nation yet again. ESPN, Rivals and 247Sports currently rank UK’s class No. 1.

In every season in the Calipari era, the Wildcats have signed a top-three recruiting class according to the Recruiting Services Consensus Index, which tallies major recruiting rankings and plugs them into a formula to calculate a consensus ranking. With the fall additions, Kentucky has signed 59 top-50 recruits, 48 top-25 players and 24 top-10 players (according to Rivals) in what will now be Calipari’s 12 recruiting classes at Kentucky.

At 6-7, 185 pounds, Boston is a consensus five-star prospect who is playing at Sierra Canyon High School (Chatsworth, California) for his senior season. Over the summer, playing alongside and against some of the best players in the country, Boston averaged 22.8 points, 8.1 rebounds, 3.2 assists and 1.9 steals per game in the Nike EYBL circuit. At Sierra Canyon he’s posting 19.7 points per game.

Boston is considered one of the top shooting guards in the class and is ranked as high as No. 6 overall by ESPN. He earned 2018-19 MaxPreps Boys Basketball Junior All-American Team Honorable Mention distinction after averaging 18.4 points, 5.4 rebounds 1.9 steals while leading his previous high school in Norcross, Georgia, to the state semifinals last season. He’s a 2019-20 All-USA Preseason High School Boys Basketball Team selection and was also on the 2020 Naismith Trophy High School Boys watch list.

Clarke is currently the top-ranked signee of this UK signing class. Both Rivals and 247Sports consider him the No. 4 overall player in the class with 247Sports assigning him top shooting guard honors. USA Today named him to its All-USA Preseason High School Boys Basketball Team, and like Askew and Boston, he’s also a 2020 Naismith Trophy midseason candidate.