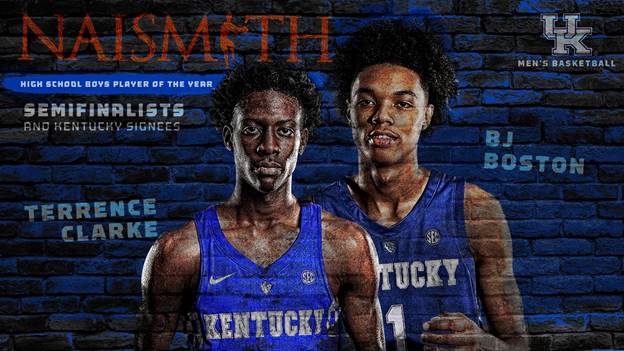 Wildcats BJ Boston and Terrence Clarke are among 10 semifinalists for the 2020 Naismith High School Trophy. They will also join fellow signee Lance Ware in the 2020 Iverson Roundball Classic.

Boston and Clarke have already been named 2020 McDonald’s All American Game participants and are in the midst of superb senior seasons.

Five finalists will be named for the Naismith Trophy for the nation’s player of the year on Feb. 18 before the Atlanta Tipoff Club unveils the winner on March 10.

Ware will join Boston and Clarke for the 2020 Allen Iverson Roundball Classic on April 24 in Philadelphia at the 76ers Fieldhouse.

The players will be divided into two teams, Loyalty and Honor, each coached by an NBA legend. The game has been in existence since 2017 and is run by NBA Hall of Famer Allen Iverson.

UK’s current signing haul, which also includes Devin Askew, Cam’Ron Fletcher and Isaiah Jackson, is in the mix for one of the top classes in the nation yet again. ESPN, Rivals and 247Sports currently rank UK’s class No. 1.

Rosters for the annual Jordan Brand Classic, another elite all-star circuit game, have not been announced yet.

BJ Boston
At 6-7, 185 pounds, Boston is a consensus five-star prospect who is playing at Sierra Canyon High School (Chatsworth, California) for his senior season. Over the summer, playing alongside and against some of the best players in the country, Boston averaged 22.8 points, 8.1 rebounds, 3.2 assists and 1.9 steals per game in the Nike EYBL circuit.

Boston is considered one of the top shooting guards in the class and is ranked as high as No. 4 overall by Rivals. He earned 2018-19 MaxPreps Boys Basketball Junior All-American Team Honorable Mention distinction after averaging 18.4 points, 5.4 rebounds 1.9 steals while leading his previous high school in Norcross, Georgia, to the state semifinals last season. He’s a 2019-20 All-USA Preseason High School Boys Basketball Team selection.

Terrence Clarke
Like Boston, Clarke is 6-7 and 185 pounds. The consensus five-star prospect from Boston is playing his high school ball at Brewster Academy in New Hampshire and enjoyed a sensational summer season. Playing in the Nike EYBL, Clarke showed he’s one of the game’s best young scorers with a 16.2 average to go along with 5.1 rebounds and 3.7 assists per game. Not only will he be an early favorite to score the basketball for Kentucky next season, but he also has the tools to be a shutdown defender.

247 Sports rates Clarke as the No. 4 overall prospect in the class with Rivals assigning him the No. 5 overall rating. USA Today named him to its All-USA Preseason High School Boys Basketball Team.

“Every team needs a guy that will do things that help you win – those winning basketball plays. Lance does those,” Calipari said during the fall signing period. “Lance has the ingredients to get a team over the hump. He’s skilled, he’s tough, he rebounds and he finishes around the basket. Lance knows what his strengths are and plays to them. He’s going to have a tremendous career here at Kentucky.”

Ware, from Camden High School in Camden, New Jersey, is comfortable with the ball in his hands from just about anywhere from 15 feet and in. He’s ascended in the rankings and is tabbed as high as No. 32 by Rivals.

The current Wildcats return to action on Saturday when they travel to Knoxville, Tennessee, with a date against the Volunteers of Tennessee. Tip is set for 1 p.m. on CBS.