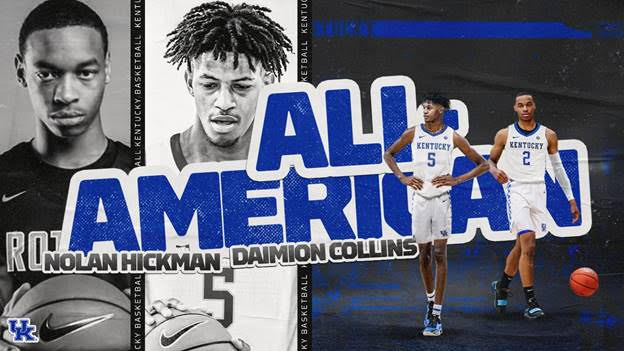 In what has almost become a foregone conclusion every season, the Kentucky men’s basketball team’s signee class will once again be well represented on the 2021 McDonald’s All American Game 24-player roster.

Fall signees Damion Collins and Nolan Hickman are the latest “burger boys” who were selected to the annual roster. Kentucky is one of three programs to have multiple selections to the rosters. Collins was tabbed to the East squad, while Hickman is on the West team.

This is the 44th season rosters for the McDonald’s All American game have been picked, but for the second year and a row due to the ongoing COVID-19 pandemic there will not be a game.

Kentucky has signed 71 McDonald’s All Americans since the game began in 1977, including current Wildcats Brandon Boston Jr. (2020) and Terrence Clarke (2020).

UK’s current signing haul, which also includes Bryce Hopkins, have all inked national letters of intent with UK.  All three players are consensus four- or five-star prospects and all are ranked in the top 50 by at least one major national recruiting service.  ESPN, Rivals and 247Sports currently rank UK’s class No. 1.

In every season in the Calipari era, the Wildcats have signed a top-three recruiting class according to the Recruiting Services Consensus Index, which tallies major recruiting rankings and plugs them into a formula to calculate a consensus ranking. With the fall additions, Kentucky has signed 61 top-50 recruits, 47 top-25 players and 26 top-10 players (according to Rivals) in what will now be Calipari’s 13 recruiting classes at Kentucky.

UK can only comment on prospects who have signed official paperwork with the university. The spring signing period begins April 14.

Upside and a high ceiling are the first two things that come to mind when recruiting analysts talk about Collins, who has shot up the recruiting rankings over the last year. Collins, who has an impressive 7-foot-4-plus wingspan, is an elite rim protector and can impact the game in a multitude of ways.

“I’m really excited for Daimion and his family to join our program,” Calipari said at the time of the signing. “Daimion is an incredible young man with a bright future – someone who has only begun to realize just how good he can be. Our fans know I don’t like to make comparisons to our other guys, but Daimion has that type of length, the athleticism and the versatility that have separated our players from others. He wanted to be pushed and to be in a competitive environment to help him reach his full potential. The staff and I cannot wait to help him grow.”

At 6-9, Collins is explosive and plays above the rim. Collins was named one of 25 players to the midseason team for the Naismith Trophy High School Player of the Year earlier this year. He finishes with strength and has range offensively. Defensively, Collins is an exceptional shot-blocker who can step out and defend on the perimeter. Collins is averaging 35.2 points, 14.4 rebounds, 7.0 assists and 6.2 blocks per game during his senior season.

He averaged 24.6 points, 13.7 rebounds and 7.7 blocks per game as a junior at Atlanta High School. The Atlanta, Texas, native was a Third Team All-State selection by the Texas Association of Basketball Coaches.

Hickman is simply a playmaker. With Calipari known for utilizing multiple ball-handlers on the floor, Hickman has the ability to play with or without the ball and has the reputation as being one of the best lead guards in the country.

“I had the chance to see a lot of Nolan in the year or so before the pandemic hit,” Calipari said this fall. “I am really excited about his ability to play the point guard position. He has speed, vision and scoring ability. One of the best things about Nolan is his competitive spirit. He plays to win, which our best guards I’ve coached do. Nolan is someone who can play multiple positions in the backcourt, who can fly in transition, and most importantly can create for himself and his teammates. Our guys will love playing with Nolan as he is a team-first player who is incredibly mature.”

At 6-2, Hickman also adds a 6-8 wingspan that gives him length to guard a number of positions. A physical player, the Seattle native owns a versatile offensive game and his tenacity makes him a tough defender as well. As a senior, Hickman is averaging 16.6 points per game, 5.3 assists, 3.9 rebounds and is making 38.6% of his shots from 3-point range.

He averaged 17.3 points, 3.4 assists, 3.7 rebounds and 2.0 steals per game for Eastside Catholic last season. Hickman also connected on 38% of his 3-point field goals. A First Team All-State selection by Scorebook and a Class 3A Associated Press First Team honoree, Hickman will play his final high school season with Wasatch Academy.

The current Wildcats return to action on Saturday when they host Florida. Tip is set for 4 p.m. ET on CBS.