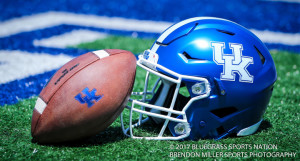 Jones, of Youngstown, Ohio, earned first-team defense honors last season after leading the SEC in solo tackles per game (5.7). Overall, he led UK and ranked third in the league in total tackles per game with 8.4. He finished the season with 109 tackles and led the Wildcats with 15.5 tackles for loss.

Jones is currently on the preseason watch lists for the Bednarik Award and the Bronko Nagurski Trophy, given annually to the nation’s top defensive player. He was a third-team Preseason All-SEC pick by the media.

Ware, a native of Opp, Alabama, returns as one of Kentucky’s leading pass rushers as he ranked second on the team in total sacks (5.5) and tackles for loss (12.0) last year. He has started in 24 of 25 career games for the Wildcats, including 19 consecutive. He also was a second-team Preseason All-SEC selection by the media.

Conrad, a native of LaGrange, Ohio, ranked fourth on the team in receiving in 2016 with 19 catches for 262 yards and four touchdowns. He had a career day vs. New Mexico State, catching five passes for a career-high 133 yards and three touchdowns in the 62-42 win. He became the first player since Dicky Lyons Jr., vs. Florida on Oct. 20, 2007, to have three receiving touchdowns in a game. He also was the first tight end with 100 receiving yards in a game since Jacob Tamme vs. Tennessee on Nov. 24, 2007. The 133 receiving yards are the third-most by a tight end in Kroger Field history. Conrad is currently on the John Mackey Award Preseason Watch List for the nation’s top tight end.

Snell, who earned a spot on Athlon’s 2017 preseason SEC third-team offense, is on the preseason watch lists for the Maxwell Award, given to college football’s top player and the Doak Walker Award, given to the nation’s top college running back.

Edwards led all SEC defensive backs in tackles in 2016 with 100 and was one of just six players overall in the league with 100 or more tackles on the season. He ranked second on the team and seventh overall in the SEC in tackles per game (7.7) and tied for 10th in the conference in total passes defended (11). He was a second-team Associated Press All-SEC selection, and was a third-team pick by Athlon and Phil Steele.

The safety from Cincinnati had two interceptions of Heisman Trophy winner Lamar Jackson in Kentucky’s win over No. 11 Louisville in 2016, earning him SEC Co-Defensive Player of the Week.

Edwards is currently on the watch list for the Paycom Jim Thorpe Award, given to college football’s top defensive back. He earned second-team preseason All-SEC honors by Athlon Sports and was also a third-team member on the preseason All-SEC team by the media.

MacGinnis, one of the nation’s top returning kickers, hit 16-of-19 field goal attempts in 2016 and he enters the 2017 season with a streak of seven straight made field goals, which is just four short of his own school record of 11 straight. He is just the second player in school history to hit at least 50 career field goals (57, Joey Worley, 1984-1987) and his 257 career points ranks No. 2 on UK’s all-time scoring list. He needs just 48 more to tie Lones Seiber (2006-09) as the top scorer.

The 5-foot-10, 185-pounder from Wedowee, Alabama, was a fourth-team preseason All-SEC selection by Athlon Sports. He is currently on the 2017 Lou Groza Collegiate Place-Kicker Award preseason watch list.