Skinner and Stumler Rally No. 3 Kentucky Past No. 9 Mizzou 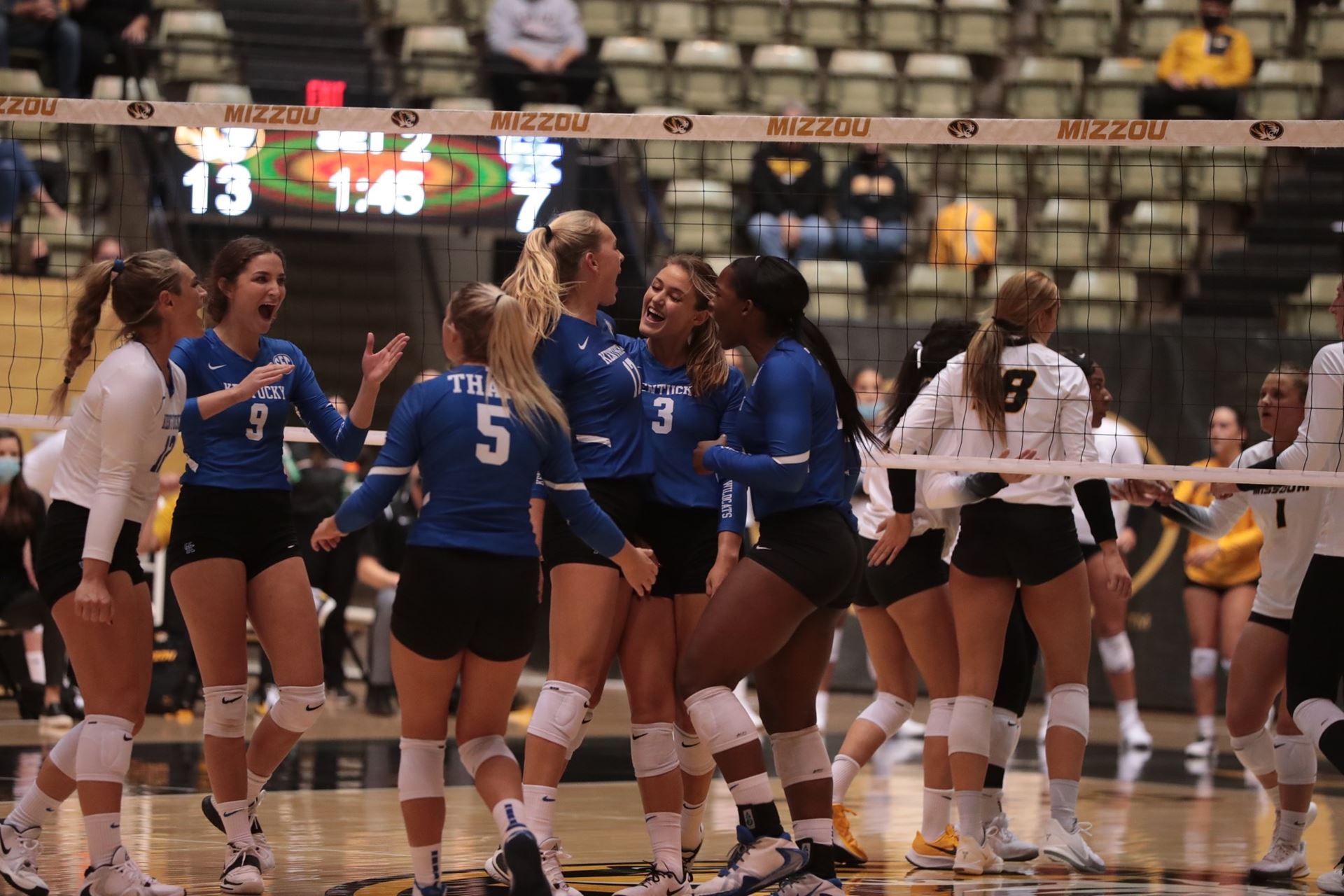 The opening two sets of the match were as thrilling as it gets. The Wildcats fell behind early in the opening set by as many as eight points, but rallied to make it close at the end. UK had a swing for 24-24, but missed it and the Tigers took a tight opening frame.

In the second set, Kentucky again fell behind significantly early in the set, but clawed back and forced extra points and on its ninth set point, closed out a 35-33 win on a kill from Alli Stumler to close the phrase.

Madison Lilley was nothing short of sensational, racking up 51 assists in the match and six digs. The defensive leader for the Wildcats was Gabby Curry yet again, who registered 13 digs, as she now has double-digit digs in all three matches this season.

Skinner’s 21 kills tied her career high set on opening weekend vs. Tennessee, as the Katy, Texas native hit .396 on the night with 48 swings, only a pair of errors and seven blocks. Stumler had 13 digs to go along with her 21 kills, hitting .390 on the match.

Kentucky as a team outblocked Missouri, 13-4 with Azhani Tealer registering a career-high six blocks in the match, including a solo stuff as she tallied 12.5 points in the match.

The finale of the two-match series with No. 9 Missouri will be on Thursday at 9 p.m. ET. The match will be shown live on ESPNU and the ESPN app from the Hearnes Center.

Set One
It was a rocky start for the Wildcats, who found themselves struggling in serve receive for the first parts of the opening set. UK dug itself an 8-3 hole and after four-straight Tiger points, called a timeout. Behind the swings of Alli Stumler and a handful of key serves from Azhani Tealer, UK clawed its way back into the set by winning six of eight points to pull to within 15-11 and pushed Mizzou into a timeout. Kentucky got timely swings from Stumler in the middle portions of the set to pull closer as the Wildcats got to 20-18 on a huge kill in an extended rally and it was the closest the set was since MU led, 5-3. An Avery Skinner termination at 21-20 cut the gap to one and that prompted the Tigers to use their second timeout. UK had a swing from the right side to tie the set at 23, but it fell into the net and that gave the Tigers a pair of set points at 24-22. Missouri capitalized on the second set point with a kill off the Kentucky block and that ended the set, 25-23. Kentucky hit .462 in the opening set, led by five kills from Alli Stumler and four from Avery Skinner. Lilley added in 12 assists.

Set Two
UK again found themselves trailing early in the second set as the Tigers jetted out to an 8-2 lead and forced the Wildcats into a timeout. Kentucky found itself deep in trouble again, as the Tigers led 10-4 and put UK on its heels again. At the midway point of the set, Mizzou led 15-10 as the closest UK got at that point was those five points. Similarly to the first set, UK worked its way methodically back into the set by controlling the middle stanza of the frame and climbed the mountain to within two point at 17-15, prompting a Tigers timeout. Cameron Scheitzach stepped to the service line and delivered two clutch serves, including an ace and one that prompted an out-of-system error to tie the match at 20-20. UK took its first lead of the set at 23-22. Each team had a trio of set points at that point and the set would go extra points for the first time in Kentucky’s young season. Kentucky took the lead six different times in the set with a shot at set point, and finally found a way on set point number seven to close out the set as Alli Stumler hammered home her 11th kill of the match to put the set on ice.

Set Three
Elise Goetzinger was the spark plug for Kentucky in the early parts of the third set, as she had a trio of blocks and kills within a five-point span that pushed the Tigers into an early timeout with UK leading, 11-8. The Wildcats then were tied three points later as Mizzou won the next three successive points to tie up the frame at 11. Avery Skinner’s 16th kill of the match gave the Wildcats a 20-16 lead and put UK in the driver’s seat for the first time in the stretch run of a set. It was a rather straightforward finish for the Wildcats who pragmatically worked their way to the finish lone with some rocketed terminations by Stumler and Skinner along the pins.

Set Four
It was a second-straight good start for UK in the fourth set as Kentucky raced out to a 7-4 lead through the opening 11 points to take control of the frame from the get-go. Kentucky controlled the pace and tempo of the entire set, as the Wildcats never trailed in the frame and only allowed the Tigers to creep as close as one point once. Alli Stumler’s 21st kill ended the match as the Wildcats closed out a four-set win.