Stoops: Mistakes in Loss at Auburn Easily Noticeable, But Correctable 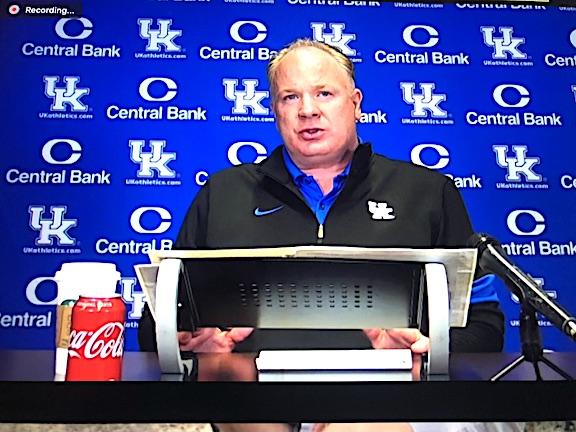 Kentucky doesn’t have much time to dwell on what went wrong in the season opener last weekend.

After reviewing film from a 29-13 loss to Auburn, coach Mark Stoops said the team’s two turnovers — an interception and a fumble — were “very noticeable” and added “we have to get that corrected” going into Saturday’s home opener against Mississippi.

Stoops remains confident his team will fare better in crucial situations against the Rebels, who opened the season with a 51-35 loss to Florida. The bottom line, Stoops said, is to eliminate costly miscues.

Stoops said the Wildcats have plenty to build on
forward. On their first drive of the season, the Wildcats marched  93 yards that took more than six minutes to complete.

“We felt like the majority of the first half, we played a lot like we want to play,” Stoops said. “We had some balance. We were very physical. We controlled the line of scrimmage, played solid defense, not great. We had some errors there as well.”

Wilson was intercepted at the goal-line one play after an running back Chris Rodriguez appeared to have scored a touchdown. The officials, both on the field and following an instant replay, ruled he didn’t cross the goal line. Stoops said the turnover by Wilson was a “critical moment” and added the missed call doesn’t matter.

“We had our opportunities. I think that’s the good news,” he said. “There’s a lot to build from a lot of good things, but they need to clean up the mistakes. It doesn’t get any easier when you’re playing a schedule like we’re playing this year. We got to pick it up quick (this week). We do have to analyze ourselves, you know, and be very critical of ourselves early in the season.”

Stoops hopes the Wildcats can eliminate the first-game mistakes this week.

“You just hope to be the team that screws up the least because everybody is going to screw up, you know, early in the year,” he said. “You have to be able to overcome it when you’re a better football team. You could overcome mistakes because everybody has them.”

SCHEDULE UPDATE: Kentucky’s contest against Mississippi State set for Oct. 10 will kick off at 7:30 p.m. and will be televised on the SEC Network.