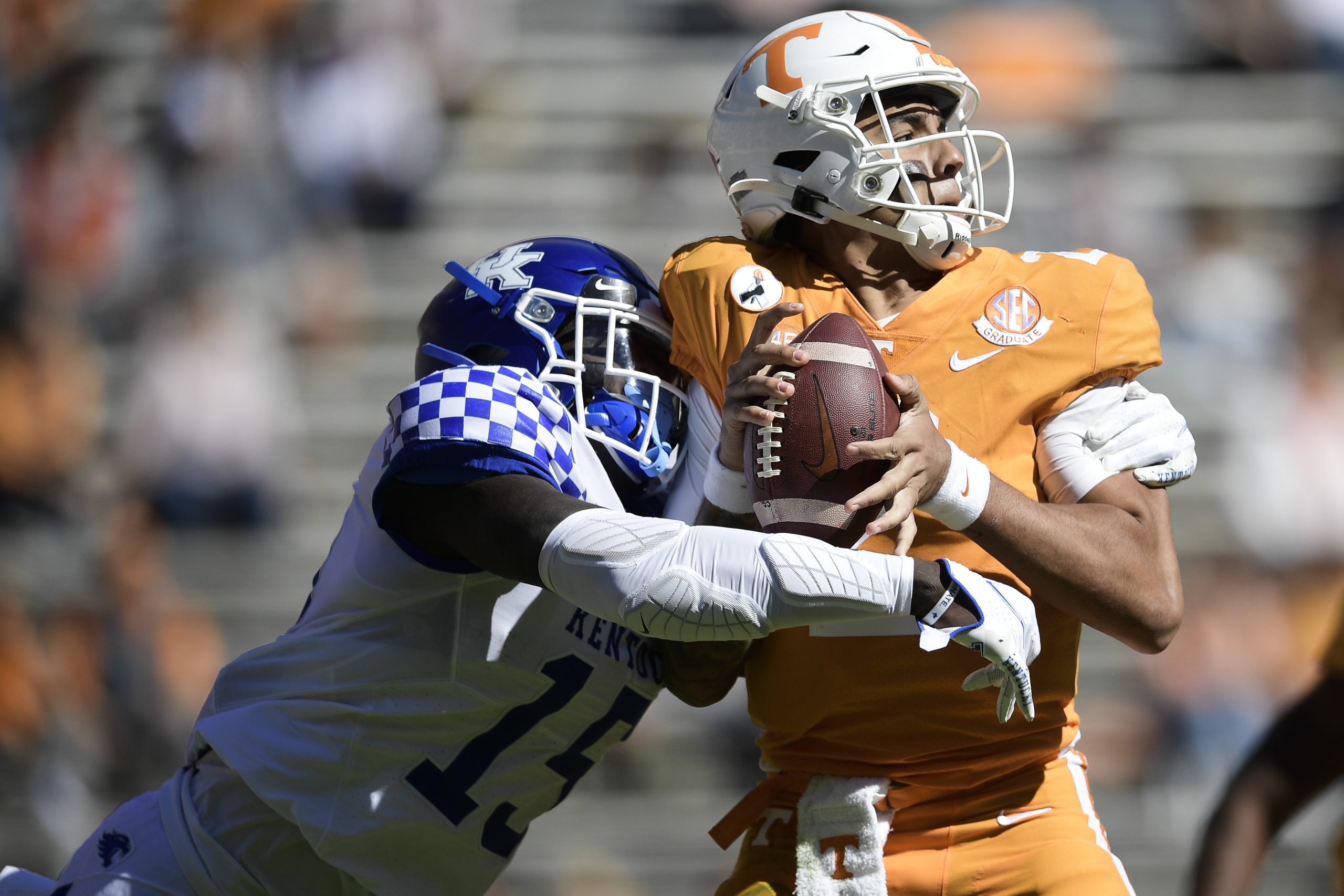 Kentucky accomplished a rare feat by defeating Tennessee on Saturday and it wasn’t even close.

For the first time since 1984, the Wildcats left Knoxville with a victory, thumping the 18th-ranked Volunteers to bring an end to a 17-game losing streak at Neyland Stadium and handing Tennessee its second consecutive loss.

Tennessee (2-2) used a goal-line stand to hold off the Wildcats 17-13 last year In Lexington, but coach Jeremy Pruitt was denied a third straight win over Kentucky on Saturday.

The feat came two years after the Wildcats (2-2) ended a 31-year losing streak to Florida at The Swamp in Gainesville, bringing an end to decades of past failures against the Gators.

“Knocking down the doors, I’ve said it before and I will say it again, we haven’t had to deal with that too much lately,” Kentucky coach Mark Stoops said. “I’m grateful for that and our teams knocking down a lot of doors. This was another one. I don’t like our teams inheriting 20 to 30 years of history. That’s not on these guys, we are responsible for what we’ve done lately. The locker room was a lot of fun.”

Two years ago, the Wildcats dropped a 24-7 loss to the Vols in what turned out to be a 10-win season. Kentucky went on to beat Penn State in the Citrus Bowl later that season.

“This game was personal for us, especially for me because the last time we played here, it didn’t go the way we planned for it to go,” said Kentucky linebacker Jamin Davis, who had 12 tackles and an interception return for a touchdown. “We were just excited to get the (win) and we were tired of leaving here empty-handed. It’s always a good feeling to get the win, but here, it’s very special.”

Unlike the last trip to Rocky Top, the Wildcats changed up their travel itinerary and practiced at the University of the Cumberlands in Williamsburg before making the final leg of the trip to Knoxville Friday night.

“Two years ago, I didn’t like the way we came out with our energy and the whole situation, and this year, we broke it up,” Stoops said. “It was a beautiful day, great campus, our players really enjoyed it and it broke up the day. It was a good change-up for us.”

A week after using six interceptions in a dominating 24-2 win over Mississippi State, Kentucky’s defense picked up where it left off, forcing four turnovers, including three interceptions that led to 17 unanswered points in the first half, setting the tone for the decisive victory. Kentucky’s secondary has collected nine interceptions in the past two games and has allowed just one touchdown in the last eight quarters.

“I couldn’t be more proud of our football team just the way we’ve responded the past couple of weeks,” said Stoops, who added the team’s defense is getting sharper as the season progresses. “Early in the season we had some tough losses, but not for a lack of effort. Our guys have had the right attitude and I think we’ve cleaned things up.”

Kelvin Joseph began the defensive fireworks against the Volunteers with a 41-yard interception return for a touchdown in the second quarter. Davis followed with an 85-yard pick-six on the following defensive series, capped by a backflip in the end zone.

A series of three Tennessee turnovers in the second quarter, capped by Matt Ruffalo’s 30-yard field goal following Tyrell Ajian’s interception gave the Wildcats a 17-7 lead at the break.

Kentucky’s offense managed just 75 yards in the first two quarters, but had 219 in the final half and dominated the time of possession, especially in the third quarter. The Wildcats scored 10 points and ran 18 plays in the third frame, compared to a pair of three-and-outs by the Volunteers. Overall, Tennessee collected just 84 yards in the second half and ran just 20 plays.

“The good news is we haven’t really put it all together yet,” Stoops said. “We played a really solid second half, controlled the football, and controlled the line of scrimmage. We got some really tough yards when we needed it and got some tough first downs.”

Kentucky quarterback Terry Wilson, who became the first Wildcat quarterback to get road wins over Florida and Tennessee, savored his latest accomplishment.

“It’s pretty fun just to be able to go do some things that haven’t been done in recent years,” Wilson said. “That’s one of the main things I wanted to do in coming here. I wanted to go on the road and beat those teams we haven’t in a while. It’s an awesome feeling to be able to get (this win).”

Pruitt was disappointed with a second consecutive loss and No. 2 Alabama next on the docket.