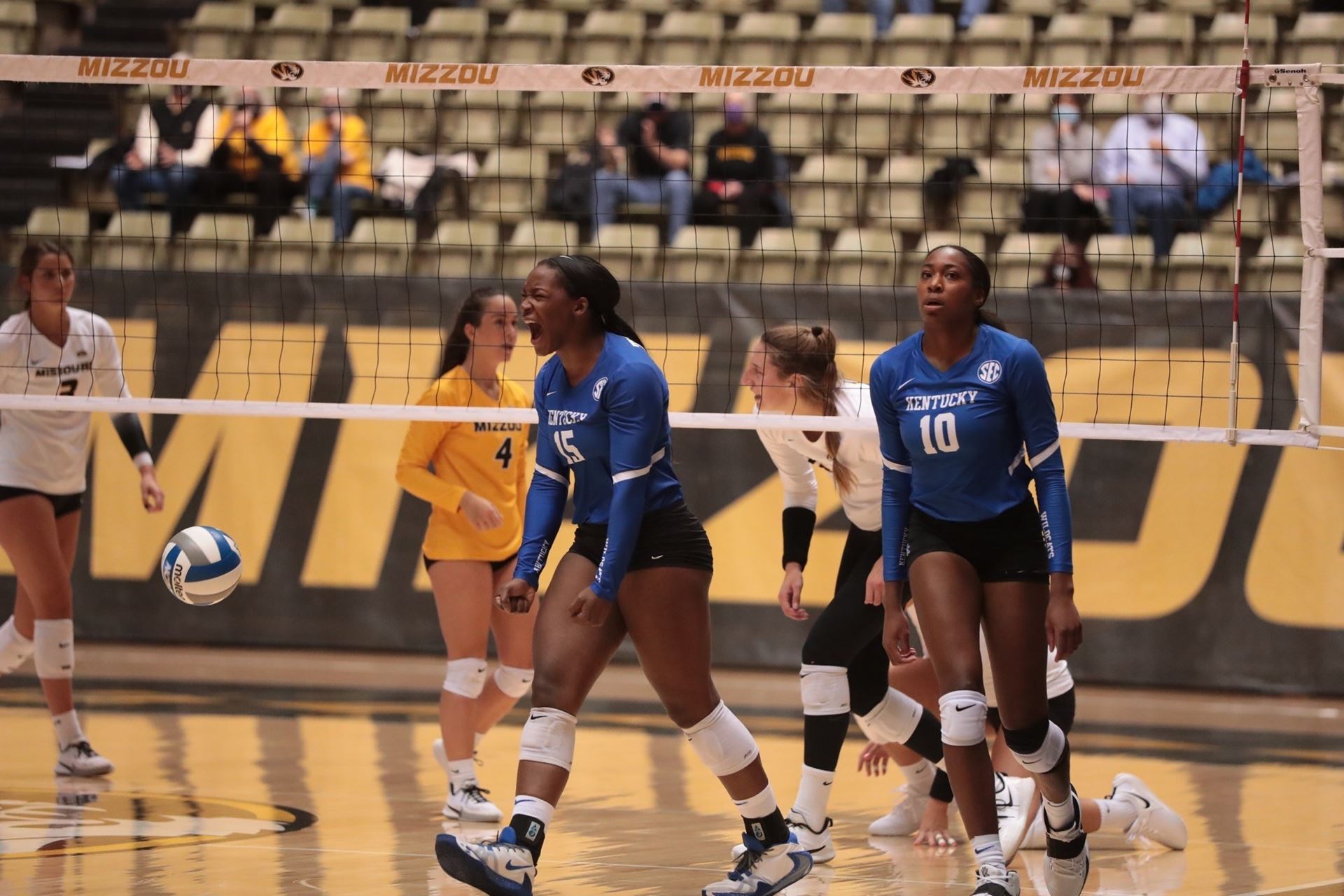 Kentucky lost the first set for the second night in a row, but rebounded and was able to win three-straight sets afterwards to close out the match in four. The Wildcats now sit tied atop the Southeastern Conference standings with Texas A&M with a 4-0 record at the halfway pole of the 2020 fall season.

“Both nights, I was just really proud of the toughness we showed after set one.” UK head coach Craig Skinner said. “Our composure at the service line and receiving serve was at an extremely high level tonight. Those two things were a huge difference in our ability to score offensively the rest of the match.”

Stumler and Tealer were outstanding all night, with Tealer’s athleticism shining through as she set a new career high with 14 kills. Tealer hit a monstrous .458 on the match with a pair of service aces and three blocks, as well. It was another ho-hum night for Stumler with 22 kills on 54 swings and a pair of aces and assists.

Madison Lilley continued a torrid start to her senior campaign as she registered 47 assists, leading UK to a .304 hitting percentage for the night, while also racking up another double-double, her fourth of the season, with 11 digs to go alongside her 47 assists.

Gabby Curry had the defense on lockdown with Lauren Tharp all night as Curry recorded 15 digs and Tharp adding in six. Curry had some massive plays in the later end of the second set and into the third set that allowed the Wildcats to take control of the match. Curry had five assists, as well.

Kentucky will return to action November 7 and 8 against the Auburn Tigers inside Memorial Coliseum. Both matches will begin at 4 p.m. ET with Saturday’s match shown on the SEC Network+ and Sunday’s on the SEC Network.

It was the Azhani Tealer show in the early stanza of the first set, as the sophomore had three kills and a pair of aces on a service run to push the Kentucky lead to 10-5 and that prompted a quick timeout by Mizzou with Kentucky leading, 10-5. Mizzou would go on a run in the middle part of the set to pull even with the Wildcats at 13 all, marking the first tie of the set since it was 1-1. An 11-4 run put Mizzou in control at 16-14 in the frame and Kentucky burned the first of its two timeouts in the set. Missouri began to run away with the set, winning four of the next points and taking a 20-16 lead as the Wildcats were forced to burn their second timeout trailing by four. Missouri cruised to the finish line to take the opening set, 25-19. Kentucky’s offense was stymied all set, hitting just .122 as a team, led by five kills from Alli Stumler. The Tigers hit .382 in the set with six kills from Kylie Deberg leading the way.

It was another strong start to the set for Kentucky, who jetted out to a 9-3 lead in the second set behind the arm of Avery Skinner and nice plays by Madison Lilley. Down by six early, Missouri expended the first of its timeouts following a Skinner kill from the left side. Cam Scheitzach entered the match and went 6-for-6 at the service line with a pair of aces as the Wildcats created some sizeable separation with an 11-3 lead. Similarly to the opening set, Missouri awoke in the middle part of the frame and won seven of eight points to push Kentucky into a timeout, with UK’s lead shrinking to 14-11. Missouri continued to slowly close the gap, as the Tigers got it to one point at 18-17 before Elise Goetzinger reinstated the UK lead back to two points with kill at the net. Alli Stumler had a perfect roll shot at the net to give the Wildcats a three-point lead at 21-18 and that pushed the Tigers into their final timeout. Madison Lilley killed the set for the Wildcats with a dump at the net and UK evened the match with a 25-21 second-set win. Stumler leds the way with 10 kills through the opening two sets and seven kills to go alongside. UK hit an impressive .405 in the second set, up some 300 points from set one.

Gabby Curry’s impressive defense kept the Tigers at bay in the beginning stages of the opening set as the Wildcats ran out to a 3-0 lead and a strong run of kills from Stumler and Skinner pulled the Kentucky lead to 14-8. The media timeout came at 15-11 with the Wildcats leading by four points. Tealer won a point at the net on an over pass and Curry continued to lock down the fort defensively as the Wildcats ballooned their lead to 18-12 and that pushed the Tigers into a timeout. Kentucky closed the set on a 6-0 run paced by Tealer, who tied her career high with 12 kills to that point in the match and won the third set, 25-14.

Kentucky started strong in the fourth set as well, marking their territory with a 15-10 lead at the media break and stretching it out to an 18-12 lead before the Tigers called their first timeout. Alli Stumler eclipsed the 20-kill mark for the third time in four matches this season as her 20th termination from the left side prompted MU to stop play. Mizzou needed another timeout trailing 21-13, but there was nothing they could do to stop the Kentucky offense as the Wildcats closed out the match in four sets with a 25-16 win.