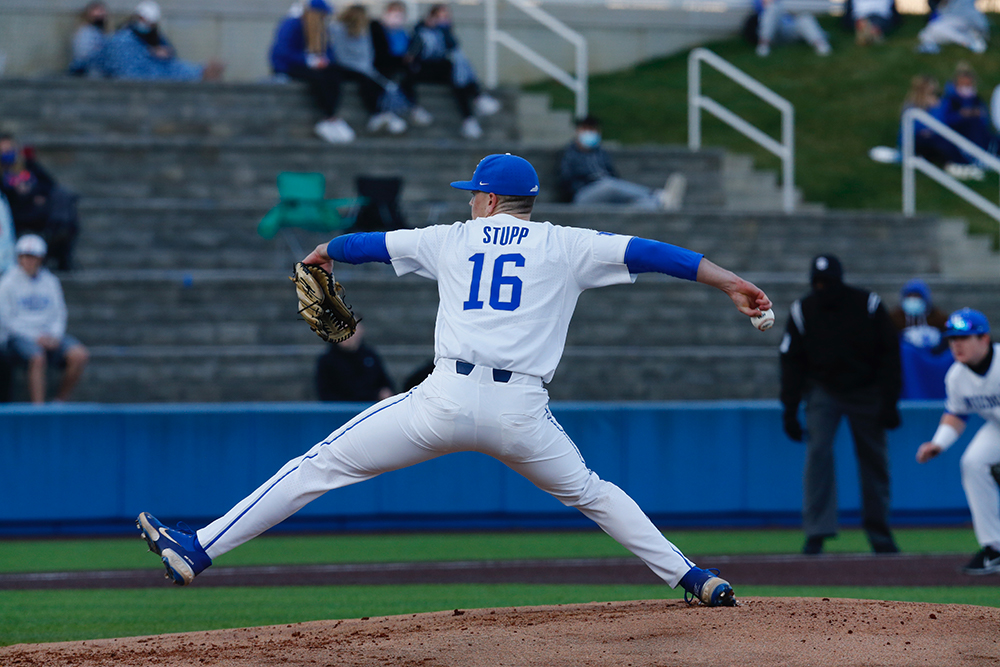 The sophomore strikes out a career-high 10, setting the tone in first home league opener since 2012

Having waited nine years to open Southeastern Conference play at home the Kentucky baseball team wasted no time taking advantage, jumping out to an early lead and cruising to a 10-2 victory over Missouri at Kentucky Proud Park on Friday night. It was the first time the Wildcats began league play on their own diamond since 2012.

Sophomore right-hander Cole Stupp was dominant in his first taste of SEC competition, quickly taking care of business in the early innings while his offense piled up a big lead. Staked with that seven-run cushion the Georgia native pounded the strike zone on his way to a career-high 10 strikeouts in seven innings, allowing five hits, walking two and yielding just one unearned run. He moved to 3-0 on the season and lowered his earned run average to 1.14 while setting a tone for his team.

Offensively, the Cats (12-3, 1-0) pounced on Missouri starter Spencer Miles immediately, scoring three runs in the first inning and four more in the second. Five different Wildcats registered multiple hits and four drove in a pair of runs, exemplifying the balanced attack the team has shown early in the 2021 season. The lineup grinded out nine walks and forced Mizzou (7-11, 0-1) pitchers to throw nearly 200 pitches on the night.

Senior catcher Coltyn Kessler went 3-for-3 with a pair of walks, reaching base all five times he came to the plate, while senior first baseman T.J. Collett remained hot in going 2-for-4 with a double, two RBI and a 13-pitch first-inning at-bat that helped fuel the initial rally.

Top 8th – Coletta reached on an error, Vierling singled and Belk walked to load the bases. McDaniel grounded out to first, scoring one. UK 7, Missouri 1.

The Cats will look to claim the opening SEC series on Saturday afternoon. First pitch is set for 2 p.m. ET. The game will be aired on SECN+. The radio call will be on the UK Sports Network.