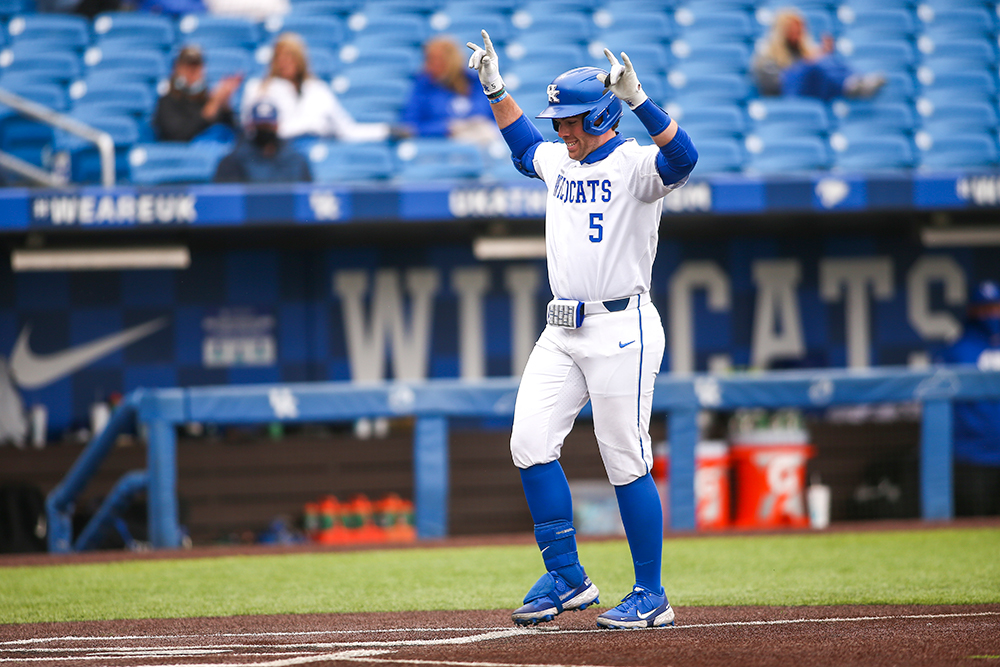 The Wildcats battle back twice to win on Sunday, completing second weekend sweep of season

T.J. Collett delivered the thunder and Sean Harney slammed the door, pushing the Kentucky baseball team to a 4-2 victory on Sunday that secured a three-game weekend sweep of Georgia State. The win improved the Wildcats to 11-2 overall and completed their second series sweep of the season while outscoring the Panthers 26-4.

Collett sent shockwaves through Kentucky Proud Park for the third straight game, launching a 406-foot moonshot over the right field bullpen and out of the stadium’s footprint in the first inning, erasing the Cats’ first deficit of the series. He later slapped a game-winning RBI double inside the third base line in the seventh inning, foiling the defensive shift deployed by the Panthers. It was the second game-winning hit and third go-ahead knock for Collett in the series.

The senior from Terre Haute, Indiana rocked the Panthers (4-13) throughout the series, homering in three straight games for the third time in his career while driving in eight runs. He now has 30 career round-trippers, placing him in the top 10 of active Division I players.

Although Sunday wasn’t the crispest game the Cats have played it was certainly full of critical moments that were aced by a team that is quickly gaining confidence. Sophomore infielder Chase Estep made two eye-popping defensive plays at third base, junior catcher Alonzo Rubalcaba was a brick wall behind home plate and sophomore shortstop Ryan Ritter thwarted a potential threat in the ninth with a slick pickup of a groundball with spin on it to start a double play.

On the mound, sophomore right-hander Zack Lee was strong through four innings before giving way to the bullpen. Senior righty Holt Jones earned the win with 1.1 perfect innings, extricating the Cats from a jam in the sixth by stranding the go-ahead run at third, and then handing the ball to Harney to close out the final two innings and earn his fifth save of the season.

Bottom 7th – Anu singled to RF and scored from first on Collett’s double down the LF line. UK 3, Georgia State 2.

The Cats return to Kentucky Proud Park on Tuesday for the final non-conference game before SEC play opens, hosting Murray State. First pitch is set for 4 p.m. ET. The game will be aired on SECN+. The radio call will be on the UK Sports Network.