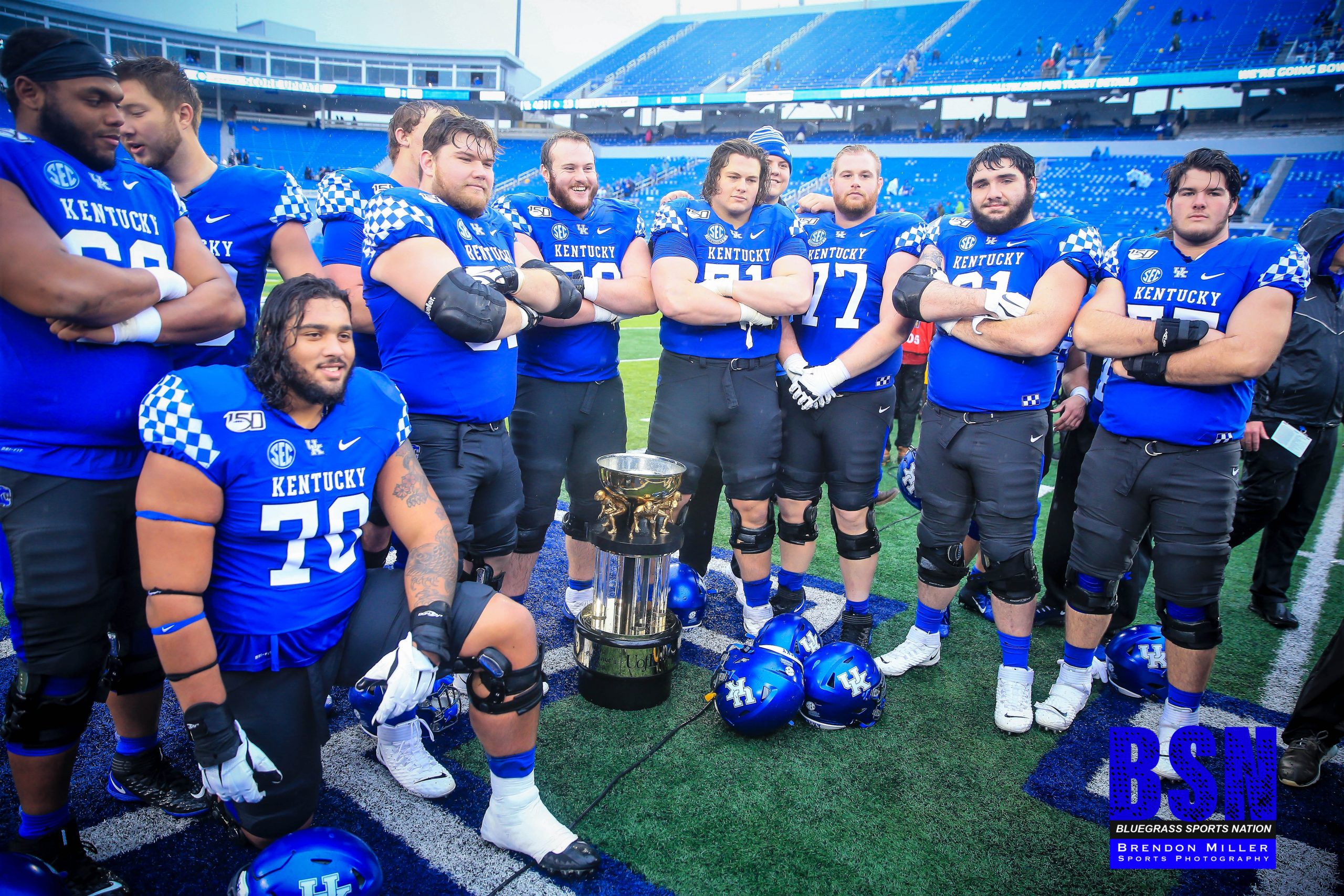 The Wall with the Governor's Cup - photo by Brendon D. Miller - BSN

Since Mark Stoops came to Kentucky, he has lit a fire in the Big Blue Nation. Steadily making strides to become a real contender in the SEC. Before coming to Kentucky, Stoops served as an assistant coach at Florida State under Jimbo Fisher. Stoops made a name for himself as a top recruiter by landing big name after big name in his tenure with the Seminoles. While he has had huge success recruiting and developing players over the course of his career; call me biased, but none may be bigger than the group of linemen he has assembled on the 2020 version of the CATS.

Branded the Big Blue Wall, UK’s offensive line graded out as the best offensive line in the SEC in 2019. That’s right, better than Alabama and eventual National Champions, the LSU Tigers. What is even more impressive is the fact that for more than half the season the CATS lined up with a wide receiver at quarterback. Yeah, it was Lynn Bowden…but anyone who knows football, knows that Bowden wouldn’t have been nearly as successful without the guys up front. All of us remember the winning drive in the Belk Bowl and the heroics of Bowden to Ali for the win, but it was the Wall that paved the way to victory against the Virginia Tech front 7. That was 2019…..what about now? What does 2020 look like for the Wall?

Jackson contemplated entering the NFL draft before deciding to return to Lexington for his senior campaign. Most major college sports outlets have Drake touted as the number one returning center in the SEC. We at BSN agree! Drake is a Bluegrass orginial from Woodford County High School, and the signal caller for the offensive line, making blocking calls and identifying the main threats on any given play. As a junior “DJ” was named, First-Team All-SEC (AP and Athlon), SEC Fall Academic Honor Roll, and also named to the Rimington Trophy Watch List. This preseason, Drake is on the Rimington and Outland watch lists and has been tabbed a Preseason All-American by Athlon and Preseaon All-SEC First-Team by Athlon and Phil Steele. Drake helped set a single-season school record with 3,624 rushing yards, 36 touchdowns, and 6.3 yards per carry. He also had 44 pancake blocks (according to ukathletics.com). What is even more impressive than that? Drake graduated in December of 2019 with a degree in agricultural economics and is currently working on a master’s degree in kinesiology and health promotion.

One of the book ends for the Big Blue Wall is tackle Landon Young.

Young is another home-grown Kentucky boy. The 6’7, 321-pound senior left tackle played his high school ball at Lafayette. Landon was a All-SEC Third Team performer by Athlon in 2019 for the Wildcats. Young was named to the SEC Fall Academic Honor Roll. He was also named captain of the 2019 Allstate AFCA Good Works Team; an annual award given to college football players for the impact they make off the field … First team captain in school history … One of just 11 FBS players chosen on the team, UK’s 15th overall player named to the prestigious team. Landon was also Inducted into the Frank G. Ham Society of Character which honors Wildcats who have shown an extraordinary commitment to academic excellence, athletic participation, personal development, career preparation and serving as a role model. With all of that, Landon also graduated in December of 2019 with a degree in animal sciences and is currently working on a second degree in agricultural economics. Other than playing in the NFL, his dream job is to be a veterinarian. Something that many of you may not know about Landon is that he chose his jersey number because it was the age his grandmother passed away and he wanted to honor her.

The other book end may be UK’s most publicized. Darian Kinnard is an absolute beast. In 2019, he graded out as a top five tackle out of the power-five conferences. His grade – 89.2. That’s incredible! Kinnard will be a junior in 2020. In his sophomore campaign, Kinnard only had one penalty in 706 snaps. He was a second-team performer as an offensive tackle for the(PFF). Already, Kinnard has been named preseason Second Team All-American by Athlon, Fourth-Team by Phil Steele, is on the Outland Watch List, and is Preseason First Team All-SEC by both Athlon and Phil Steele. His major is in kinesiology. Darian frequently visits at the VA Hospital in Lexington. Something that most people don’t know about Darian is that he is related to Dolly Parton (according to ukathletics.com).

The big question mark will be who fills the shoes of Logan Stenberg at left tackle. Stenberg moved on to the NFL after a prolific college career. My money is on Eastern Kentucky native Austin “Big A” Dotson. Dotson, a 6’6″, 330-pound junior, saw action in nine games last season. Dotson played his high school football for the Belfry Pirates, where he won 4 consecutive state championships.

Anyone who knows Belfry Football, knows that Austin had to learn a whole new way of playing football when he arrived on campus at UK. Now in his junior year, Austin is more than capable of filling the hole that Stenberg left. Austin is majoring in sociology and is expected to graduate in December of this year. Dotson was named to the 2019 SEC Fall Academic Honor Roll. After his football career, Austin would like to be in the Secret Service. One thing that many people may not know about Austin, is that he is a descendent of Devil Anse Hatfield, the patriarch of the Hatfield Clan during the infamous Hatfield-McCoy feud. When Austin isn’t tearing it up on the field, you can find him fishing, hunting, or playing video games with his buddies.

The Big Blue Wall will see a couple different guys getting playing time outside of these four. Senior, Luke Fortner who saw a lot of playing time may very well fill that 5th starting spot. Luke is a 6’6, 305-pound guard. He was named to the 2019 SEC Fall Academic Honor Roll. Fortner was inducted into the Frank G. Ham Society of Character. He is a mechanical engineer major who, along with Toyota Motor Manufacturing Kentucky and other engineering students, helped design and specially built push cart vehicle to provide a Kentucky Children’s Hospital patient the chance to both accompany the Wildcats on the Cat Walk and attend a game at Kroger Field in a project called, “Lift Them Up” (ukatheltics.com).

The other name to keep an eye out for is Kenneth Horsey. Kenneth is a redshirt sophomore. The 6’3, 292-pounder from Sandford Florida is a pre-management major. Horsey is getting a lot of buzz around Lexington for his work ethic and determination. His dream job outside of playing professional ball is to be a football coach.

The Wall is tutored by the great John Schlarman. Schlarman was named OL Coach in 2013, and the OL has helped Kentucky post four consecutive seasons of 2,000 or more rushing yards and advance to four consecutive bowl games. John is the rock that hold this group together and spurs them to excellence.

With changes constantly being made to schedules and playing dates, UK is expected to play ten games all of which are conference games. If you are going to compete in the SEC, you better have a good offensive line. Kentucky doesn’t have a good unit up front….THEY HAVE A WALL!!!!!! Coach Stoops has had several high-profile players go on to play in the pros, but his greatest recruiting job to date is this group of men. With athletes all over the field and the return of dual threat quarterback Terry Wilson, the SEC better not sleep on the 2020 CATS!!

As alway, BSN will be there to chronical the full season.