The Midnight Rider Wins the Big One 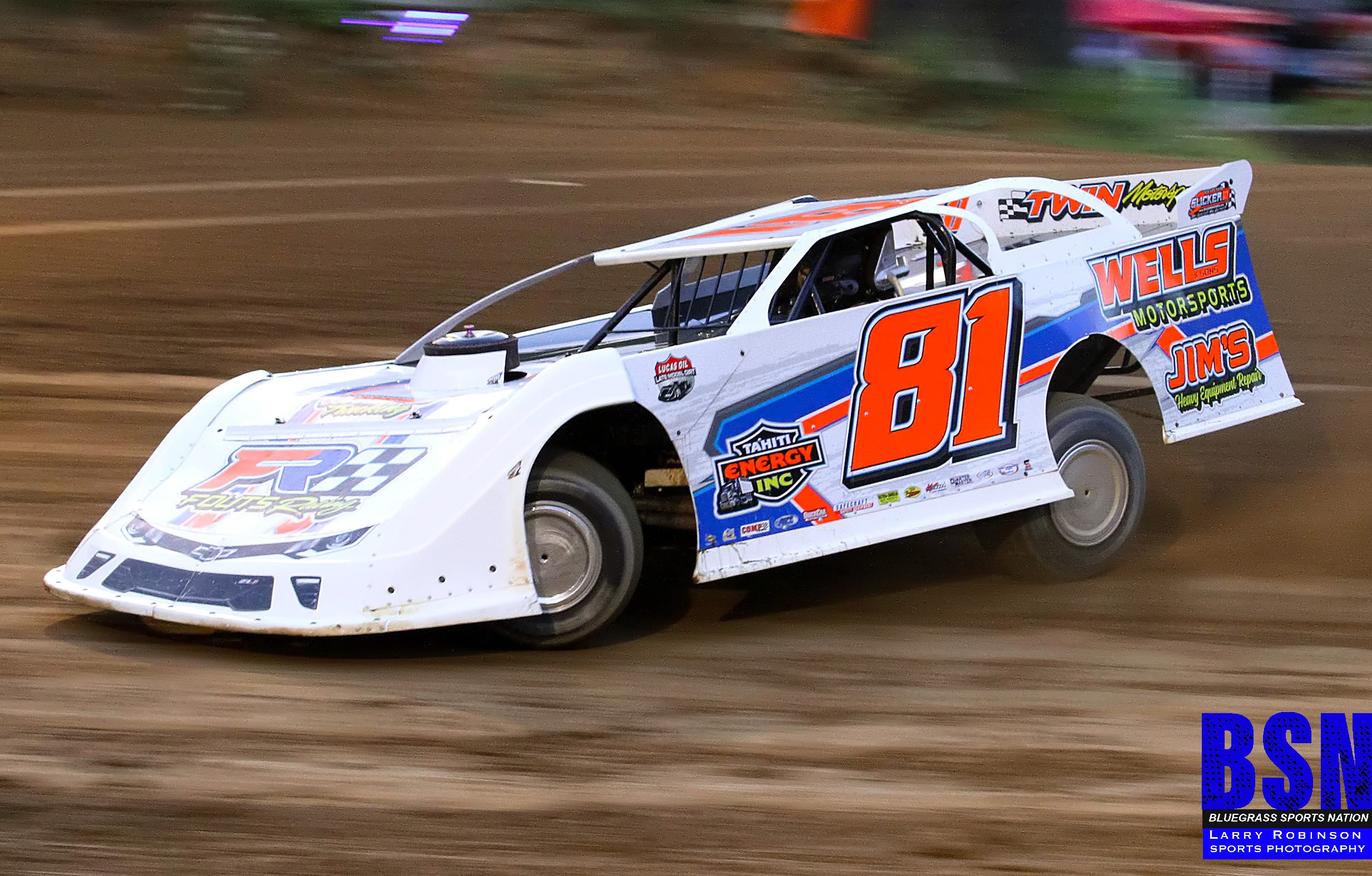 The second generation driver had a night to remember as he set a new track record in qualifying with a time 14.958. Fout’s record time would lock him into the Southern All-star feature along with another Tim Short Automotive Sponored Late Model driver, Dustin Linville who just missed the 14 second mark with a time of 15.109.

Fouts would start the 40 lap feature on the pole and lead every lap of the main event. Dustin Linville would however have a great night as he took his #8 car to a side-by-side race with the winner, but was unable to pull ahead at the flagstand. Linville left his Rooster Nation smiling with pride however as he finished second.

Another pair of local drivers would find themselves in the top-5 at the end the night as well as Hazard’s Steve Stolling finished the big race in fourth place and Jeremiah, Kentucky’s Raymond Nichols piloted his #10 Late Model to a fifth place finished.

Mark Dodson, who entered the night third in the SAS points standings really had to improve his points status as he finished sixth. Shannon Thornsberry had techinal diffulculties with his machine and still managed a top 10 finish as he was one spot ahead of the Sourthern All-stars Series Point Leader Billy Franklin.

Billy’s nephew Austin Franklin finished nineth, while Pikeville’s Brent Cornette would round out the top 10.

The current Hometown Sports Corner points leader, Oscar McCowan continued to stretch out his lead as he once again set fast time, and won both his heat race and the Open Wheel Modified Feature win. The win makes it three-in-a-row for the driver fans have dubbed the O-show and his 72nd career win!

Second generation driver out of Letcher County, Andy Mason continues his consistant streak, with his second place finish. Mason has not been outside the top three spots all season long.

Brandon Hutchison continues his Track Championship hopes alive with a third place finish in the A85 Stealth Open Wheel. Nathan Honeycutt and his 9h car had his best feature finish of the season with a top 5 finish as he ran 4th. Hazard’s Hunter Feltner finished 5th, while Kevin Harkins was sixth in the #12 car.

Another Hometown Sports Corner Points Leader, continued to win his class, but this past Friday night the win was not as dominate as they have been in the past few weeks as Racin’ Tim Mason won the Bomber Feature after setting fast time before going on to win the feature. The bomber heat race was won Marcus Griffith in the rainbow colored #3g. He also had a good night in the feature as he raced seccond to Mason. Dakota Shepherd keeps his points hunt for a chanpionship still alive as he finished third Friday night. Johnaton Maggard ran his first bomber race of the season and finished fourth, while #23 Danny Fields would round out the top 5. With the win, Mason has now won 6 of the 7 features we’ve had at Mountain Motorsports Park and rumor is there may be a bounty placed upon him this coming weekend.

After winning 2 in a row, Johnathon Fields driver of the #77 4 Cylinder returned to the winner circle after he held of challenges from three different drivers. Last week’s winner #13 Justin Lawson moved his way through the field but would only be able to catch the leader and had to settle for second. #71 Corey Ford finished third, #33t Travis Hall was fourth in his first night of the season.

Finally you may say we’ve saved the best for last. The sport modified feature had four different leaders as they each traded for the top spot, cars were passing through the entire 10 car field. On the final lap it would be last weekend’s winner Jacob Hall aboard the Cornbread Express 43j Sport Mod. The win makes it his third straight victory in the sport Mods. #5 Garet McCloud finished with his best performance of the season as he ran second, and Tony Simore (one of the four drivers to lead the race) would finish the night in third. Hindmans Darren Slone came away fourth after leading part of the feature race and #1 Caleb Howard also had one of his season best runs as he finished 5th.

This coming Friday night it will be the Kids night to compete as we will be having our first Bicycle and power wheel races of the season. For more on that check out the Mountain Morotsports Park facebook page.