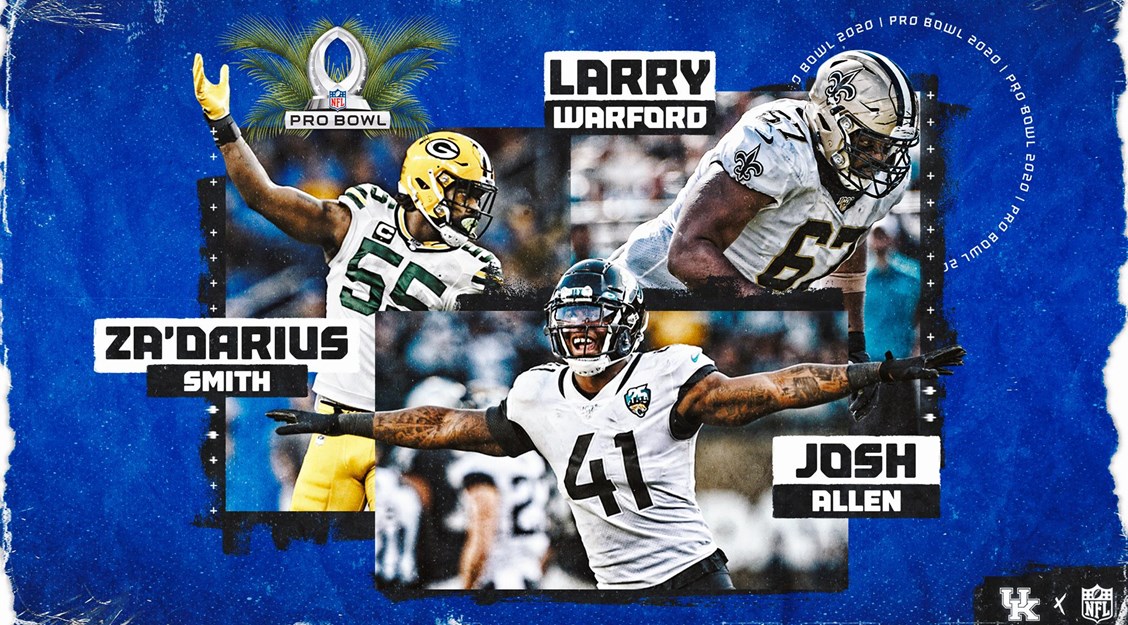 LEXINGTON, Ky. –Three former University of Kentucky Wildcats, defensive end Josh Allen, outside linebacker Za’Darius Smith and offensive guard Larry Warford, were named to the 2020 Pro Bowl which will take place Sunday, Jan. 26 at Orlando’s Camping World Stadium. The game kicks off at 3 p.m. ET and will be televised live on ESPN, ESPN Deportes and simulcast on ABC and Disney XD, and tickets are on sale now at NFL.com/ProBowlOnSale.

Allen, an edge rusher for the Jacksonville Jaguars, became the first rookie in franchise history named to the Pro Bowl. He had an outstanding rookie season in 2019, finishing with 44 tackles, 11 tackles for loss, 10.5 sacks and two forced fumbles in 16 games.

At Kentucky, Allen was also a pass rush terror. With 31.5 career sacks and 17 sacks in 2018, he broke UK’s career and single-season records and moved up to No. 9 on the Southeastern Conference’s career sacks chart. His 11 career forced fumbles tied former Wildcats and current Chicago Bear Danny Trevathan for UK’s career mark (forced fumbles stats available since 1988).  He led the team with 88 tackles and paced the SEC in sacks, tackles for loss (21.5) and forced fumbles (5). He also was among the NCAA leaders in sacks, TFL and forced fumbles. He was a unanimous first-team All-American and first-team All-SEC selection. In addition, he earned National Defensive Player of the Year as the winner of the Bronko Nagurski Award, the Chuck Bednarik Award, the Ronnie Lott IMPACT trophy and the SEC Defensive Player of the Year (Associated Press, Athlon and ESPN). He was later chosen as the seventh pick in the 2019 NFL Draft by the Jaguars.

Smith also makes his first Pro Bowl appearance after leading the NFL in quarterback hits (37) and total pressures (93) for the Green Bay Packers, who advanced to their first NFC Championship game in three years. He also had a team-high 13.5 sacks to go along with 55 tackles and a forced fumble.

Playing at Kentucky for two seasons (2013 and 2014), Smith totaled 119 tackles, 14.0 tackles for loss, 11.0 sacks, three pass breakups and two fumble recoveries during his Wildcat career. He went on to be drafted in the fourth round by the Baltimore Ravens in 2015.

Warford, a four-year letter winner and three-year starter at right guard for Kentucky from 2009-2012, earned All-SEC honors all four years of his career. As a senior, Warford did not allow a sack all season. He was voted a third-team All-American by the AP and was a second-team All-SEC selection by the AP and the league’s coaches.

In 2013, Warford was selected in the third round of the NFL Draft by the Detroit Lions. He made an immediate impact at right guard, earning 2013 Pro Football Focus Offensive Rookie of the Year.

After four seasons in Detroit, Warford signed a four-year contract with the New Orleans Saints. Currently in his seventh season overall and second with the Saints, Warford blocked for a team tied for third in the NFL in points per game and gave up only 25 sacks, tied for the league’s third-lowest total. Warford is only the second Saint to be named to the league’s all-star game in each of his first three seasons with the club and only the second guard to be named three times.

Kentucky now has had 17 different Wildcats earn a spot in a Pro Bowl, 49 times. This is the most in one season since three were chosen in 1981 (Frank LeMaster, Art Still and Jeff Van Note).