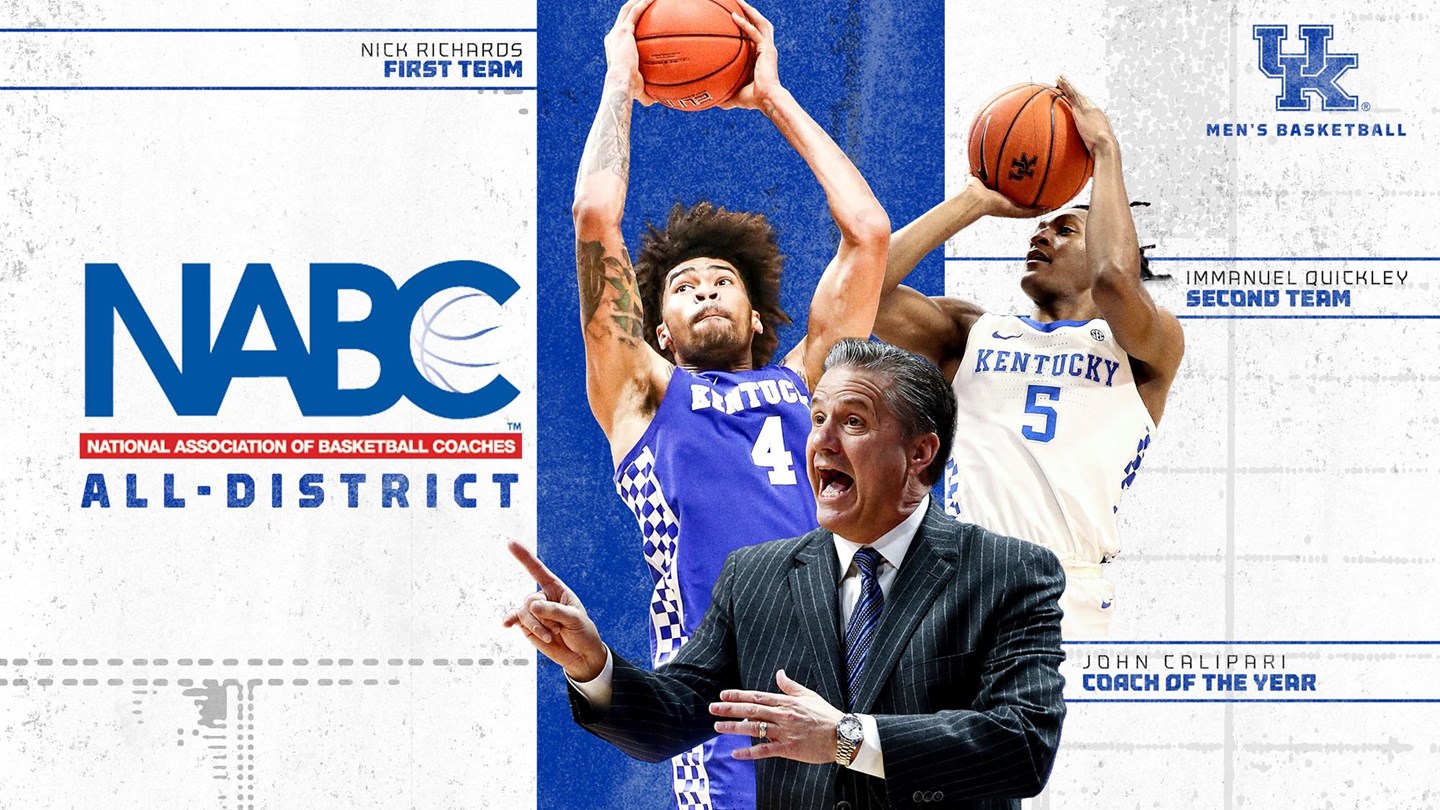 Three Kentucky men’s basketball Wildcats added to their postseason honors with the release of the National Association of Basketball Coaches All-District awards on Monday.

Selected and voted on by member coaches of the NABC in NCAA Division I, the student-athletes represent the finest basketball players in America. The players are selected from schools that make up the Southeastern Conference.

Monday’s NABC awards add to a growing list of postseason honors for Richards, Quickley and Calipari. Quickley has already been named an All-American by a number of outlets after winning SEC Player of the Year honors (as selected by the coaches), Richards was a consensus All-SEC First Team pick by the league’s coaches and media, and Calipari was named the SEC Coach of the Year from the league’s coaches and the U.S. Basketball Writers Association. A full list of their awards to this point is below.

A player of the year was not chosen for each district.

Richards not only enjoyed the most productive season of his career, he produced one of college basketball’s best stories of the season.

After averaging 4.5 points, 3.9 rebounds and 1.1 blocks over 13.4 minutes a game in the first two seasons of his career, he led Kentucky in rebounding (7.8 per game), blocks (2.1 per game) and double-doubles (10) to go along with a conference-high .644 field-goal percentage and 14.0 points per game. His field-goal percentage ranked fourth in the nation.

The centerpiece of a frontline that entered the season with questions about its depth and talent after losing PJ Washington and Reid Travis to the pros, Richards squashed any and all concerns about his ability to produce. Case in point: Richards was one of four players in the country to average at least 13.5 points per game, at least 7.5 rebounds and at least 2.0 blocks while shooting at least 60.0% from the floor this season. He finished 2019-20 in the 98th percentile in offensive efficiency in the Synergy national rankings and in the 88th percentile on defense.

Twice Richards won SEC Player of the Week in addition to two national player of the week awards.

Richards played well early in the season, but his meteoric rise began vs. Louisville and continued into the conference season. Despite impressive early numbers, Richards had yet to fully break through vs. consistent, upper-level competition. Against Louisville’s front line, one of the best in the country, Richards delivered. The 6-foot-11 big man secured a double-double with 13 points and 10 rebounds, the majority of his production coming in the latter stages of the game with four fouls.

Other noteworthy performances included a 27-point, 11-rebound game vs. Mississippi State, featuring 25 points in the second half. At Texas Tech, he recorded 25 points, 14 rebounds and four blocks, becoming just the second Wildcat in the Calipari era with such a stat line. National Player of the Year Anthony Davis did it in 2012.

Richards also led the Wildcats with 66 blocks, including 18 games with multiple rejections.

As Richards went in 2019-20, so did UK. Kentucky was 22-2 this season when he scored in double figures, 10-0 when he grabbed double-digit rebounds and 7-1 when he blocked at least four shots.

The sophomore ended the season on a career-best 20-game double-figure scoring streak, the best run since Malik Monk scored in double figures in 30 straight games during the 2016-17 season. During the 20-game stretch, Quickley scored 20 or more points eight times and made three or more 3-pointers seven times, including a career-high eight at Texas A&M.

Calipari’s work in 2019-20 was certainly one of his best coaching jobs.

With Calipari at the helm, Kentucky won its sixth regular-season league title in the last 11 seasons and had positioned itself for one of the top seed lines in the NCAA Tournament before the cancellation of the postseason due to the COVID-19 pandemic.

UK sported a 9-3 record vs. quadrant one teams in the NCAA Evaluation Tool rankings, a 4-2 mark vs. Associated Press Top 25 teams at the time of the game and an 8-2 record in true road games. Kentucky’s six losses were by a combined 32 points.

Calipari once again proved to be a master of blending talented but young pieces together in a short period of time. By Calipari-Kentucky standards, this group was led by older players, but few of them played a major role in last season’s Elite Eight run. Only 50 starts, 27.2% of the scoring and 30.5% of the rebounding returned from a season ago, and UK still checks in at 335th in the country out of 353 teams with an average of 0.99 years of experience in Ken Pomeroy’s experience rankings.

After struggling to defend early in the season with new pieces, the Wildcats were once again one of the best defensive teams in the country. UK limited opponents to 39.4% from the floor, ranked 20th in the country, and held 18 opponents to 40% or less from the field, including eight of the last 12. UK was 15-3 in those games. Of the six AP Top 25 opponents Kentucky played at the time, the Wildcats held four of them to less than 40% from the floor.

Six different players led the Wildcats in scoring and five players scored at least 25 points in a game a total of nine times this season. This group was the first Kentucky team with three players to average 14.0 points or more since John Wall, DeMarcus Cousins and Patrick Patterson in 2009-10.