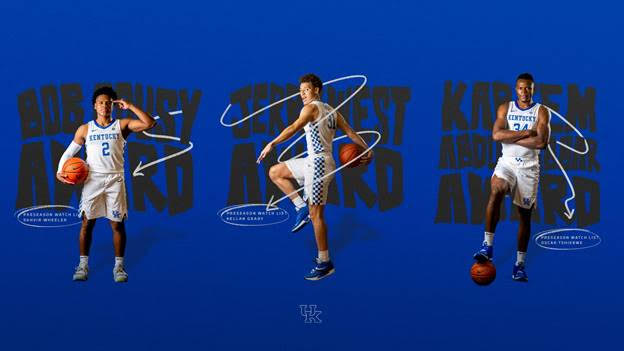 Grady, Wheeler and Tshiebwe recognized as ones to watch

Three Kentucky men’s basketball players were named to Naismith Memorial Basketball Hall of Fame Preseason Watch Lists this week. Sahvir Wheeler was listed among the candidates for the Bob Cousy Award, Kellan Grady was named to the Jerry West Award Watch List and Oscar Tshiebwe is on the watch list for the Kareem Abdul-Jabbar Award.

All three Wildcats were also named to the preseason All-Southeastern Conference Teams, as voted on by the league’s media panel. Wheeler was a first-team selection, while Grady and Tshiebwe were tabbed to the second team.

Grady was picked to the Jerry West Award for the nation’s best shooting guard. Malik Monk is the only winner in program history when he took home the honor in 2017. Grady is joined by fellow league member Jaden Shackelford of Alabama on the early season list.

The Jerry West Award is in its eighth year and is given in honor of West, who was a two-time All-American at West Virginia.

Grady was a prolific scorer at Davidson, where he scored 2,002 career points on 47.2% career shooting. With 240 career 3-pointers, Grady has made at least 51 treys in all four seasons and shot a career-best 38.2% from behind the arc in 2020-21. He has 21 games with at least four 3-pointers. Grady reached the 2,000-point milestone in Davidson’s final game of 2020-21 and was the sixth player in program history to achieve the mark.

Wheeler was selected as one of 20 candidates as the best point guard in college basketball. Kentucky has had one player in program history earn the distinguished honor when Tyler Ulis won the award in 2016. Other SEC candidates on the 2021-22 preseason list include Alabama’s Jahvon Quinerly, Tennessee’s Kennedy Chandler and Vanderbilt’s Scotty Pippen Jr.

Named after All-American and NCAA Champion guard Bob Cousy from Holy Cross, the award is in its 19th year.

Wheeler was an All-SEC Second Team selection by both the league’s coaches and the media as a sophomore at Georgia. He paced the conference in assists per game with 7.4, but he also led the Bulldogs in scoring with 14.0 per game and steals at 1.7 per outing. His 22 games scoring in double figures was also a squad best.

The Houston native was fifth in the country in assists per game and his total assists ranked third.

Wheeler broke Georgia’s single-season assist record with 193 dimes and needed just 24 games to break the record. He was also the league’s best in assist-to-turnover ratio at 1.7 to become the fourth player since 2000 to lead the conference in both assists per game and assist-to-turnover ratio. Wheeler had eight double-doubles of the point-assist variety during his standout sophomore campaign, and also registered the first triple-double in program history with 14 points, 13 assists and 11 rebounds against LSU on Feb. 23.

Tshiebwe is among the nation’s early favorites for the Kareem Abdul-Jabbar Award, which is in its eighth year and honors Abdul-Jabbar who was a three-time NCAA Champion at UCLA. UK has never had a player win the award for the nation’s best center.

Tshiebwe was off to another solid start this season, averaging 8.5 points on 52.3% shooting in addition to 7.8 rebounds prior to his midseason transfer to Kentucky.

Fans are encouraged to participate in voting in each of the three rounds for the Naismith awards. In late January, all of the lists will be narrowed down to 10 players and five in February. Winners will be announced at a to be determined date.

Kentucky is slated to begin exhibition play beginning with its annual Blue-White Game on Friday. That game will air live on the SEC Network at 7 p.m. UK will follow that with two tune-ups against Kentucky Wesleyan on Oct. 29 at 7 p.m. and Miles College on Nov. 5 at 7 p.m. Both games will air live on SEC Network. The Wildcats open the regular season in New York for the State Farm Champions Classic. They will face No. 9 Duke on ESPN.