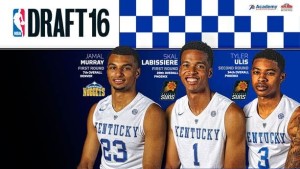 3 More Wildcats drafted into the NBA

Murray, Labissiere selected in the opening round; Ulis joins four Wildcats in Phoenix

BROOKLYN, N.Y. – It was another successful evening for the Kentucky men’s basketball program at the NBA Draft as Jamal Murray (seventh, Denver Nuggets), Skal Labissiere (28th, Phoenix Suns) and Tyler Ulis (34th, Phoenix Suns) were selected in the 2016 draft on Thursday.

Murray is the 11th UK player since 2010 to go in the top seven picks. Labissiere is UK’s 21st first-rounder in the John Calipari era, while Ulis will join four Wildcats in Phoenix after being selected 34th overall. In a proposed trade, Labissiere’s rights were sent to Sacramento, where he will join three former UK players.

“It was another nerve-wracking night waiting for draft picks to be made,” Calipari said. “I always wish the guys were drafted in better positions, but we got three in the league and all with good organizations. Although Alex (Poythress) didn’t get drafted, I’m proud of the position he’s put himself in after what he went through a year a half ago. I’m confident he’ll get a contract just like Aaron Harrison last season. At the end of the day, it was still a life-changing draft for several of our players and their families. I’m just so proud of the guys. They’ve all earned this and have chased their dreams. I know they’ll all be ready for more.”

The Wildcats have had more top-10 picks, more lottery selections and more first-round picks in the Calipari era than any other team in the country.

“Denver sounds good,” Murray said in an interview with ESPN. “I’m just happy to be with a good organization and a part of the NBA now. It’s been 19 years of me waiting for this moment so it’s a big experience. (I’ll do) whatever the team needs. It’s going to take me a little bit to get into the flow of things and just feel the team and the NBA. I’m down to do whatever. Whatever it is, I’m ready for it.”

In seven seasons with Calipari at the helm, Kentucky has churned out three No. 1 selections, 21 first-rounders, 14 lottery picks and 28 total players in the NBA Draft. The 28 draft picks is more than twice as many as the next school (Duke and Kansas) since 2010. With another surge of first-round picks, Kentucky has more first-round selections (34) than any other school in the NBA lottery era (since 1985).

Kentucky has now had 119 players drafted 121 times in its illustrious history with 42 players selected in the opening round.

“It’s a great blessing. I’ve been waiting on this my whole life,” Labissiere said in an interview with ESPN. “I’m thankful to be a part of the NBA. At first it was nerve-racking (waiting to be selected), but after a while I realized it was God’s plan for me. Wherever he wants me to go, that’s where I want to go. I know I’ll be successful in the league.”

Murray was UK’s first player off of the board when he was selected seventh overall by the Denver Nuggets. He’s the first player in program history to be selected by the Nuggets. With the Kitchener, Ontario, native going seventh overall, UK has had at least one player taken in the top seven in each of the last seven drafts.

The 6-foot-4 guard led the Wildcats in scoring at 20.0 points per game, which is the highest individual scoring average at Kentucky in the Calipari era. He earned a plethora of postseason accolades, including Associated Press Third Team All-America honors as well as All-Southeastern Conference First Team recognition by both the AP and the league’s coaches.

With 720 points this season, he owns the school’s freshman single-season scoring record, surpassing Brandon Knight (657 points in 2010-11). Murray posted three 30-point games this season. He was the first Wildcat to reach double figures in 30 or more games since Jodie Meeks had a run of 32 times in 2008-09. Murray’s streak stretched to 34 straight games. He racked up a 12-game streak of scoring 20 points or more, matching the longest such streak for any UK player since Kevin Grevey topped 20 or more points in 12 straight games in 1974-75. Having hit a 3-pointer in every game this season, Murray owns the UK freshman record for most 3-point field goals in a single season with 113. His 113 made 3-pointers are second on the UK single-season 3-point field goal list and the most of any freshman in the history of the SEC. It’s also the second most of any freshman in NCAA history, trailing only Stephen Curry’s record of 122.
Skal Labissiere

Labissiere became UK’s second selection in the opening round when he was taken by the Phoenix Suns at 28th overall. He is the sixth-ever selection by the Suns in the history of the program. Devin Booker and Andrew Harrison were chosen by the Suns a season ago. In a proposed trade, the Suns’ pick will be shipped to the Sacramento Kings, where Labissiere is expected to join former Wildcats Willie Cauley-Stein, DeMarcus Cousins and Rajon Rondo.

The native of Port-au-Prince, Haiti, appeared in all 36 games with 18 starts, averaging 6.6 points, 3.1 rebounds and 1.6 blocks in his lone season at Kentucky. His 1.6 blocks per game ranked seventh in the SEC, and he blocked three or more shots nine times during the year. Labissiere shot 51.6 percent from the field.

He scored in double figures in four of his first six career games and posted a career-high 26 points in his second career game. Labissiere came on late in the season with an 11-point, eight-rebound game in the win at Florida and an 18-point, nine-rebound, six-block effort in the regular-season finale vs. LSU. He made 8 of 10 shots in the victory over the Tigers. In his NCAA Tournament debut, Labissiere scored 12 points and blocked six shots, tied for the second most in an NCAA Tournament game in school history.

Twice Labissiere won SEC Freshman of the Week, earning the honor in the first week of the regular season and the last.
Tyler Ulis

Ulis was the second player taken by the Suns – although, Labissiere was traded to Sacramento shortly after the Suns drafted him. The Chicago native was picked 34th overall and he is the seventh Kentucky player ever taken by the franchise. It is the second consecutive season that two players have been selected by the Suns in the same draft.

The 2016 Bob Cousy Award winner had a sensational sophomore season that will be regarded as one of the best in SEC history en route to All-America honors. Ulis is the shortest consensus first-team All-American since 1958. He was also tabbed SEC Player of the Year and the SEC Defensive Player of the Year, joining Anthony Davis as the only players in league history to win both honors in the same season.

He set the UK-single-season mark for assists in a season with 246, second all-time in the SEC. Ulis was both an elite distributor and proficient scorer in his sophomore campaign, becoming the only player in league history with at least 606 points and at least 246 assists. He was one of only four players in the country this season to average at least 17.3 points and at least 7.0 assists per game. He ranked sixth nationally in assist-to-turnover ratio (3.6) and seventh in assists per game (7.0).

o   With LSU’s Ben Simmons drafted No. 1 in 2016, the SEC has had four of the last seven No. 1 selections. Five total players from the SEC have been drafted No. 1 overall. Simmons, the three UK players and NBA Hall of Famer and LSU alum Shaquille O’Neal.