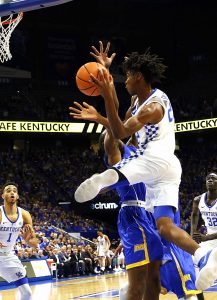 LEXINGTON, Ky. – One of the hardest tickets to get in college basketball has become easier for Big Blue Nation to get its hands on thanks to a number of new ticket options UK Athletics is offering for the 2017-18 Kentucky men’s basketball season.

Among the ticket options UK is offering are upcoming opportunities to stand in the eRUPPtion Zone, two different six-game packages featuring high-profile games, and single-game tickets.

Below is a breakdown of how fans can attend upcoming UK men’s basketball games.

For a complete listing of on-sale dates, single-game ticket prices and other ticket information, visit the men’s basketball ticket page at UKathletics.com.

Tickets for the eRUPPtion Zone, UK’s standing-room only student section, will be made available for the Fort Wayne (Nov. 22) and UIC (Nov. 26) games, which fall during Thanksgiving week.

Tickets in the eRUPPtion Zone are $10 each (cash only) and are limited to one per person (must be present at time of purchase).

New to fans this season, the UK ticket office is now offering two separate six-game packages that gives fans an opportunity to attend multiple games, including several marquee showdowns, throughout the season for one price. Seat locations for each of the six games are the same.

The two packages, the blue package and the white package, are each $325 each and are on sale now through My UK Athletics Account. The games include:

Fans will only be notified if their name is drawn. There is a limit of one entry per person and fans must be at least 18 years old to purchase season tickets. Those who are not drawn will need to re-send their request each year as names that are not drawn for the present year are discarded after the lottery is over.

Single-game tickets for the first 13 regular-season games of the season (Utah Valley through Texas A&M) are currently on sale. Fans can purchase tickets for those games through the following four options:

New this season, fans can still purchase officially verified resale tickets at Ticketmaster.com, prior to Kentucky’s official on-sale dates. TicketExchange by Ticketmaster is the only official resale market of UK Athletics. Season ticket holders may use the marketplace to post tickets on a game-by-game basis in which they cannot attend.