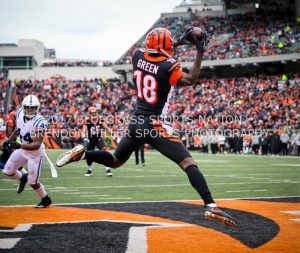 AJ Green with a TD grab – Photo by Brendon Miller

In his post-game press conference in Paul Brown Stadium a couple of weeks earlier, Marvin Lewis was uncharacteristically giddy. The usually stone-faced Bengals head coach actually cracked a few smiles and responded to questions with a bit more vim and vigor than was his custom. His team had just defeated the Buffalo Bills, improving their record to 2-3, and pulling within a game of division leading Pittsburgh.

“We’ve got to grow in a lot of areas,” he said when I asked about his mindset going into the bye week. “We don’t want to waste this (opportunity) away. You’re at a point right now where you can keep controlling your destiny and fight your way back into the race and do special things. We didn’t start out as well as we’d like, but we earned it. And now we’re earning our way out of it.”

Well, sort of. Since my last column, the Bengals have gone winless. OK, technically they didn’t lose during their bye week, but they still lost ground to their division rivals. They then doubled their misery with a nightmarish 29-14 beating at the hands of the Pittsburgh Steelers, knocking themselves back into the very same hole they dug at the start of the year. To add insult to injury, Lewis was nowhere near giddy in his Pittsburgh post-game presser, as he unceremoniously walked off the podium and out of the interview room when bombarded with questions he thought were stupid.

Fortunately, the Indianapolis Colts arrived at Paul Brown Stadium this week at just the right time. This isn’t Peyton Manning’s Colts team, nor Andrew Luck’s for that matter. This was a Colt’s team led by Jacoby Brissett behind a horrible offensive line—a unit battling the Bengals offensive line for the title of worst in the league. Fortunately for Bengal fans, the rest of the Indy offense had thus far performed just as putridly. Combined with a rancid defense, the Colts represented one of the few NFL teams the Bengals matched up well with.

The battle between the two NFL laggards played out about as predicted. Both offenses stuttered and sputtered, appearing at times to be playing for field position rather than scores. When the Colts finally punched it over the goal line with 8:14 left in the first half, the 57,901 or so in (official) attendance had a sinking feeling the game had just been clinched. If not for a 67-yd screen pass to Joe Mixon on the very next series, that may have indeed been the case. However, a long-awaited Andy Dalton to A.J. Green 8-yard touchdown toss kept the Bengals from total futility. Halftime score: Indianapolis 13, Cincinnati 10.

Throughout the afternoon, the Bengals played George Costanza football. That is, they did exactly the opposite of what was expected. They passed when they should have run, and ran when they should have passed. Although the fans were frustrated, the Colts were evidently content to let things play out. In the end, a 16-yd interception return off a tipped pass by Carlos Dunlap saved Cincinnati’s bacon. Final Score: Cincinnati 24, Indianapolis 23. Dalton ended the day 17/29 for 243 yards and 2 TDs. The Bengals’ offensive line woes continued as their rushing attack appeared terminal.

“Going into that drive, we knew that as a defense, we wanted to take over the game,” said Dunlap, describing the play that deemed him a hero. “It happened to be my moment. I happened to capitalize on it. The longest time was watching the ball come down. The 16 yards happened pretty quick. When the ball’s coming down, it felt like a long time.”

As for Marvin Lewis, he was back to his old post-game tricks. With his team treading water, I wanted an assessment of the areas of improvement he was most expecting from his team in the second half of the season. “Wow, I don’t know if I could answer that question in the time we have here,” he said with a dismissively sly chuckle. “We’ve got to improve in a lot of areas, but that’s no different than any other season. The last fourteen seasons, I would tell you the same thing.” As he blathered on, I tried to pin him down to specifics. “I would never tell you,” he finally said, effectively ending that line of questioning. Hey, I tried.

In professional football, the separation between winning and losing is razor thin. If not for a randomly batted ball, we’d be burying the Bengals and their embattled coach. As it is, the team is now 3-4 with a difficult three game road stretch staring them in the face. There’s still an audible pulse and they do have enough skilled players to pull off a wildcard berth if others falter. Hopefully, Marvin Lewis knows more than he’s letting on. Just don’t hold your breath waiting for him to share it with me.