Top Spot in SEC East On the Line in Athens 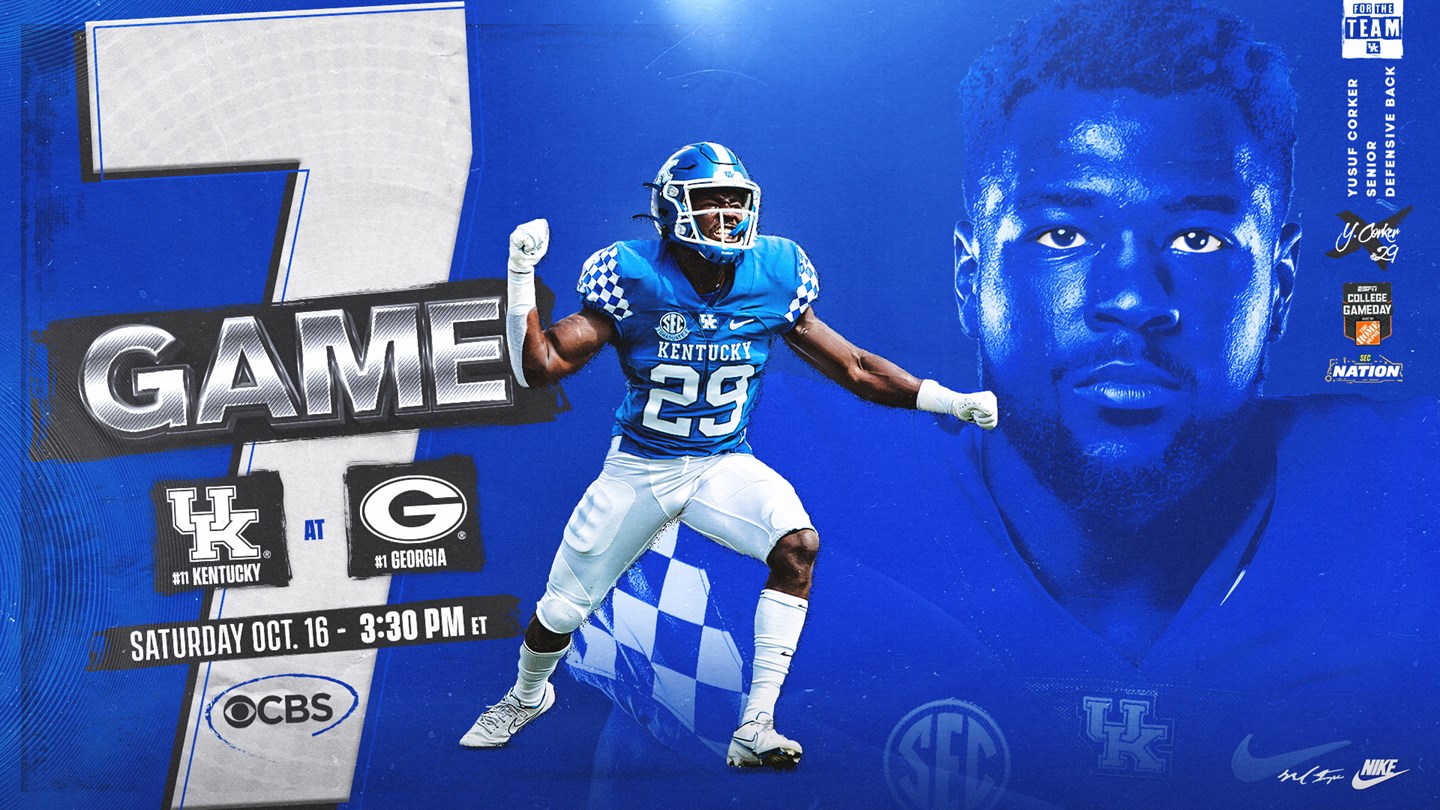 Pole position in the race for the SEC Championship Game is on the line this Saturday as No. 11 Kentucky travels to No. 1 Georgia in arguably the biggest FBS game of the week. Game time is 3:30 p.m. EDT and it will air CBS Sports. ESPN College GameDay will be in Athens, along with the Marty & McGee and SEC Nation shows.

The Wildcats are coming off a 42-21 win over LSU, the most points UK has ever scored against the Tigers in a regulation-length game. The Kentucky defense forced a turnover on the game’s first possession, setting up the Wildcats for a lead they never relinquished, and also claimed three stops on fourth-down conversion attempts.

Quarterback Will Levis was named National Offensive Player of the Week by the Walter Camp Football Foundation, completing 14 of 17 for 145 yards and three touchdowns, while also rushing for 75 yards and two scores. Linebacker DeAndre Square had eight tackles, including the quarterback sack/fumble on the opening possession.

Kentucky faces its biggest challenge of the season so far on Saturday, facing top-ranked Georgia at Sanford Stadium in Athens.

The task for Kentucky’s offense this week will be facing the nation’s top defense. Plan and simple, the Bulldogs have been amazing this year. Georgia allows just 5.5 points per game on the season, which is first in the country. They allow just 201.2 yards total per game, also first in the country.

Coen saw his offense have one of its better performances of the year on Saturday in a 42-21 win over LSU. The Cats did a lot of things right in the win and Coen was happy to see a number of different Cats contributing…Read More

Cats in the National Polls

Kentucky vs. The Ranked

A UK Win Would…

• Make the Cats 7-0 for the first time since 1950 and just the fifth time in school history (1910, 1903, 1898). Only once in the past 111 years has UK started 7-0.
• Move UK to 5-0 in SEC play for the first time since 1977.
• Push the Cats’ current winning streak to nine games, which would tie for the third-longest in school history.
• Give head coach Mark Stoops 30 SEC victories at UK, extending his school record.
• Give Stoops 56 career victories at UK, putting him just four wins shy of tying Paul “Bear” Bryant for the school’s all-time winning coach.
• Be the first over a top-ranked team since a triple-overtime win over No. 1 and eventual nationally champion LSU in 2007.
• Be the first win in school history over a top-ranked team in a true road game. UK upset No. 1 Ole Miss in Jackson, Mississippi in 1964.
• Improve UK to 4-14 all-time vs. No. 1 teams.
• Be the 13th win all-time vs. Georgia, fourth vs. a ranked UGA team (first since 1988), fifth all-time win in Athens.
• End an 11-game losing streak to the Bulldogs.

• Kentucky fell in Lexington, 14-3, on Halloween 2020.
• The low-scoring affair came on the heels of a 21-0 Georgia win in a driving rain in 2019.
• Last season, the game was 7-3 at halftime and neither team scored over the final 26 minutes of action.
• The defenses dominated the action, as Kentucky intercepted a pair of passes and held the Bulldogs to 346 total yards. Georgia held the Cats to 229 yards of offense and only 91 passing.
• UK running back Chris Rodriguez Jr. churned out 108 rushing yards on 20 carries.
• Playing against his home state school, former UK linebacker Jamin Davis had 13 tackles and a forced fumble in the game.Print Friendly Version