Toppers Fall Short Against Indiana in Front of Record Crowd 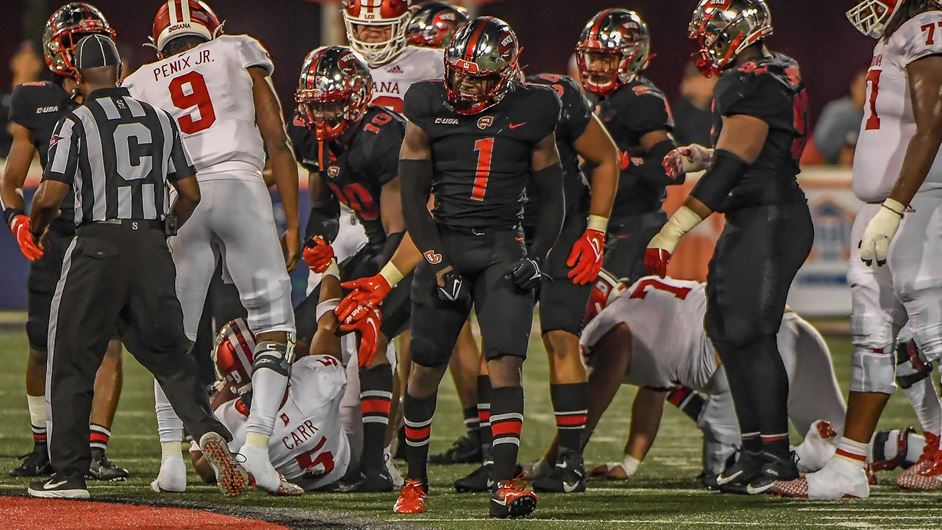 In front of a record-setting 25,171 fans in attendance in Houchens-Smith Stadium, WKU Football dropped a 33-31 contest to Indiana on Saturday night. The Hoosiers out-gained the Hilltoppers in total yardage 507-to-458, running 92 offensive plays compared to 64 for the hosts.

WKU quarterback Bailey Zappe completed 31-of-44 passes for 365 yards and three touchdowns with zero interceptions, while Indiana quarterback Michael Penix, Jr. completed 35-of-53 throws for 373 yards. Penix did not throw a touchdown or interception, but did rush for the Hoosiers’ opening score.

After falling behind 14-0 in the first quarter, the Hilltoppers got on the board with a one-yard touchdown rush by Adam Cofield – his second of the season – to pull within one score. Indiana kicker Charles Campbell then followed with a pair of field goals to put the Hoosiers back ahead 20-7 with 2:42 remaining in the first half.

The Hilltoppers quickly opened the second half with a scoring drive, with Zappe hitting Dalvin Smith for a 13-yard touchdown pass that brought WKU within 23-21 – only 107 seconds into the third quarter. It was Smith’s third career touchdown on only his fifth career reception overall.

Campbell and Hilltopper kicker Brayden Narveson traded field goals as the score moved to 26-24 but the WKU deficit remained at two with 5:53 left in the third quarter.

After both teams went scoreless for the next 15 minutes, it was Indiana who struck next with a one-yard score to go ahead 33-24 with 4:27 left in the fourth quarter. The long, 14-play, 86-yard drive took up 6:19 of the clock and left Zappe and the Hilltoppers with not much of it remaining.

But WKU kept on chugging, pulling within 33-31 after wide receiver Malachi Corley scored on a 19-yard catch-and-run – from a Zappe pass – only 104 seconds later.

When the ensuing Hilltopper kickoff went out of bounds, the Hoosiers took over and were able to gain a first down and run out the rest of the clock, escaping Houchens-Smith Stadium with a two-point win.

Head coach Tyson Helton
Opening statement:
“The team battled hard against a really good Indiana team. Defensively when we needed to get some stops, we got some. Offense at times scored really fast and did some good things. But it wasn’t good enough. It’s about winning and we don’t take losing lightly. So we’ll go back and clean it up and get ready for Michigan State.”
On how he felt about the team’s effort:
“First off, I love how our football team battles. That football team we just played, in Indiana, is extremely talented. And our guys battled extremely hard. They fight, scratch and claw – I’d go to war with those guys any day of the week, and I love to coach them. It was a pleasure to be out there and watch this football team play tonight and I’m very proud of our guys.”
On the record-setting crowd:
“It was spectacular, I can’t say enough about our crowd. It was a great atmosphere – and we’re gonna need it again in two weeks time when we start conference play. We’re gonna face a really good [UTSA] team here in a couple weeks in our conference opener. The crowd was outstanding tonight and I hope they enjoyed what they saw. Other than we didn’t get the win for them at the end, but I hope they believe in us and they continue to show up because we sure do need them. We felt them tonight for sure.”

Senior safety Antwon Kincade
On his confidence in the defense going forward:
“It’s the beginning of the season. We played three games and had a bye week early. We got a whole lot of room for improvement. We got a losing record right now, but we got a bitter taste in our mouth and we’re trying to change that as much as possible. This is a great team, man, I saw tonight we were fighting. It was the same score for about a quarter straight. Our offense is gonna score, we know that. The defense just has to come up with more stops and play better techniques in some situations, but we’ll get going.”

Freshman wide receiver Malachi Corley
On evaluating Zappe’s performance:
“Bailey had a great game, in my opinion. I feel like he put the ball where it needed to be and on time. He made the right reads and the right checks as far as the offense. He read the scheme of the defense very well; any time there was a play that we called that he didn’t like he always checked it. He’s a really smart quarterback.”

Redshirt freshman wide receiver Dalvin Smith
On returning from injuries to play in his first game of the season:
“It feels amazing to be back out there with my brothers. I love every minute and every second of it. I just love being out there with them.”