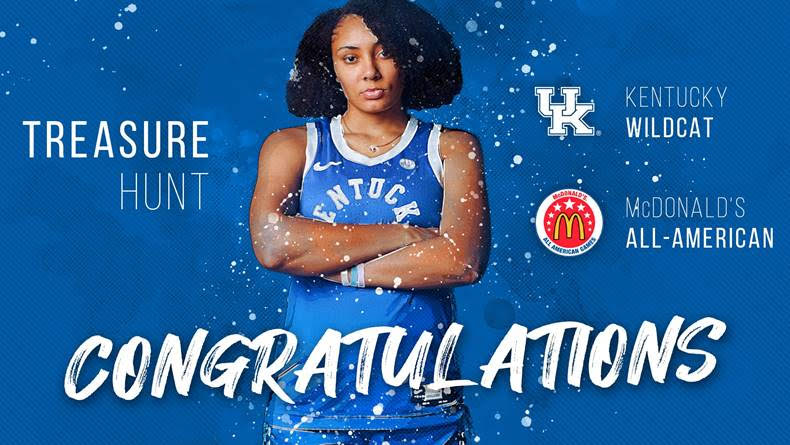 LEXINGTON, Ky. – A week after being named one of 25 players to the 2020 Naismith High School Girls Trophy Midseason Team, University of Kentucky women’s basketball signee Treasure Hunt has been named one of 24 high school players nationally to the 2020 McDonald’s All-American Game roster.

Hunt along with Nyah Leveretter and Erin Toller signed National Letters of Intent to play at Kentucky back in November and will enroll this summer. The three signees make up a top-10 recruiting class in the nation according to ESPN.com. Leveretter and Toller were both honored as nominees for the McDonald’s All-American Game and are having great senior seasons in high school. Leveretter is averaging 14.5 points and 11.4 rebounds per game this season for Westwood High School while Toller is leading Sacred Heart by averaging 15.9 points per game and is hitting 42 percent from 3 this year.

Kentucky (15-3, 4-2 SEC) is currently ranked No. 12 in the Associated Press Top 25 and will return to action Monday vs. Auburn at 7 p.m. ET on SEC Network. Tickets for all Kentucky women’s basketball home games this season are available online at ticketmaster.com.