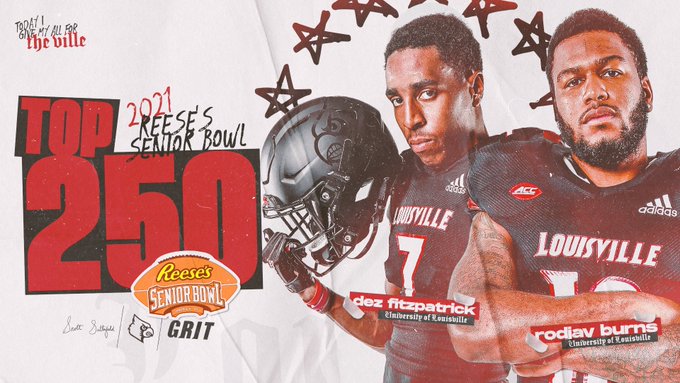 University of Louisville wide receiver Dez Fitzpatrick and outside linebacker Rodjay Burns have all been named to the 2021 Reese’s Senior Bowl Top 250 watch list.

Players must be a senior or fourth-year junior to be eligible for the Reese’s Senior Bowl, which is the nation’s most prestigious college all-star game and has been played annually since 1950.

Fitzpatrick, a redshirt senior, enters his final season looking to build upon numbers that are approaching UofL’s career top-10 lists. The native of Farmington, Hills, Mich., has caught 111 passes for 1,756 yards and 18 touchdowns, which is tied for sixth all-time.

The 6-foot-2 receiver caught 35 passes for 635 yards and six touchdowns last season, recording a season high 133 yards and a touchdown versus Florida State. As a redshirt freshman in 2017, Fitzpatrick caught 45 passes for 699 yards and nine touchdowns.

A Louisville native, Burns made a successful switch to linebacker after starting as a cornerback in 2018. Last season, Burns finished second on the team with 83 tackles and returned a fumble for a touchdown in a win over Western Kentucky.

The former transfer from Ohio State recorded a career high 16 tackles and added an interception in a win over Wake Forest. Burns also registered a pair of sacks and led the team with 11.0 tackles for loss.

The Reese’s Senior Bowl has had 93 total players selected in the last two NFL Drafts, with 40 selected in the first three rounds, including 10 first-round picks in 2019. Next year’s game will shift venues to the brand-new Hancock Whitney Stadium on the University of South Alabama’s campus in Mobile, Ala after being played at Ladd-Peebles Stadium since 1951. One thing that differentiates the Reese’s Senior Bowl from other all-star games is the participation of two full NFL coaching staffs. Last year, the two teams were coached by the Detroit Lions and Cincinnati Bengals staffs and there were over 900 credentialed NFL personnel in Mobile for game week.