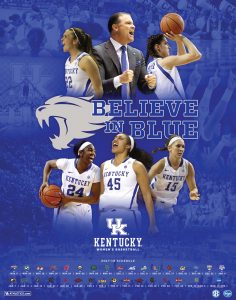 Posters to be distributed starting this weekend
LEXINGTON, Ky. – Posters for the 2017-18 Kentucky men’s and women’s basketball teams were unveiled on Tuesday. They will be distributed at Big Blue Madness presented by Papa John’s on Friday and beginning on Saturday morning at Kroger locations throughout the state.

The primary men’s basketball poster – which will be available this weekend – features silhouettes of this season’s entire team surrounded by images of some of the great players and moments from the John Calipari era. The phrase “Embrace the Challenge” graces the top of the poster. The theme of this season is to “Embrace” everything that comes with Kentucky basketball, from tradition to expectations to the stage on which every game is played.

The women’s basketball poster has a theme of “Believe in Blue,” the same one the Wildcats will carry throughout the season. Head coach Matthew Mitchell is joined on the poster by Makenzie Cann, Maci Morris, Taylor Murray, Alyssa Rice and Jessica Hardin.

Posters featuring smaller groups of players on this year’s men’s team were also unveiled which echo the same theme. One reads “Embrace Dreams” and features Tai Wynyard, Sacha Killeya-Jones, Wenyen Gabriel and Hamidou Diallo. Quade Green, Jarred Vanderbilt, Nick Richards, Jemarl Baker and Dillon Pulliam are on another with the phrase “Embrace the Stage.” Brad Calipari, Kevin Knox, Shai Gilgeous-Alexander and Jonny David appear on the third with the words “Embrace Family.” These three posters will be distributed to fans at Rupp Arena over the course of the three games of this year’s Adolph Rupp Classic on Nov. 17 vs. ETSU, Nov. 20 vs. Troy and Nov. 22 vs. Fort Wayne.

The posters will then be available for free in more than 100 Kroger stores, including every Kentucky location. Limited quantities are available in each store, so fans are recommended to pick up their posters as early as possible after they become available on Saturday.

Big Blue Madness, set for Oct. 13, will feature introductions of both the men’s and women’s basketball teams, practice drills, videos and more. Doors will open at 5:30 p.m. and the event will begin at 7 p.m.

Free tickets for Big Blue Madness, which were distributed two weeks ago in person at Memorial Coliseum and online, sold out in just 40 minutes. This will be the 13th time Madness has been held at Rupp Arena.