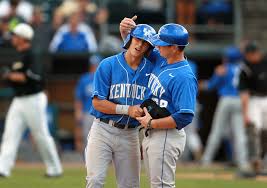 Hugging is allowed on the baseball field – Photo courtesy of baseballamerica

While all of BBN has been fretting over the Diallo decision and the Kroger corporate takeover, the UK Baseball team has been quietly and methodically winning games, mowing down traditional SEC powers and moving up the national polls en route to possibly the most magical season in program history. What’s making this team so special? What supernatural Gatorade have they been drinking? The same players who last year went .500 in the conference and missed out on post-season play suddenly have their sights legitimately set on Omaha.

Chemistry between ballplayers is frequently fleeting and fickle. How many times have we heard that teammates really like each other only to see dissention creep in at the first sign of adversity? Year after year we hear the words we want to hear—that this team or that team really gets along—hoping with our Big Blue bleeding hearts that a simple kumbaya moment together symbolizes additional potential wins on the field and translates into more championship trophies.

I’ve been tricked too many times before to believe anymore in the chemistry elixir. When it comes down to it, athletes are simply too competitive to sacrifice individual achievement for the good of the team. Show me someone who loves his brother and I’ll show you five others who also want to take his brother’s job. After all was said and done, Cain killed Abel and Jacob stole Esau’s birthright. The will to win beats the heck out of chemistry any day of the week.

Having said that, I’m still drinking the Nick Mingione Kool-Aid this year. When I asked him what makes these players so successful, the first-year UK Baseball coach pointed directly to team brotherhood. “I wish you could hear what kind of teammates these guys are in the dugout,” he said. “Marcus Carson goes over there to take Storm and they’re hugging in the dugout. These guys love each other. They want it as bad as anyone.”

Sophomore catcher Kole Cottam agrees. “We’re very close. We’re probably the definition of a family as a team. We’d do anything for each other. So honestly, we trust everything. If someone doesn’t get it done, we know the person behind us will pick us up.” That’s easy for Kole to say. He’s certainly getting it done with his newfound power—hitting Big Blue Bombs every time I go down for nachos.

Junior first baseman Evan White is also getting it done. Although he still lets his bat do most of the talking, he’s also trying to be more of a vocal leader this year. “This group of guys love each other,” he said. “It’s great playing with each other. We trust one another to pick each other up. Teams like that, it’s incredible to be a part of.”

Even the pitching staff is feeding off of this sappy love fest. Sophomore right-hander Justin Lewis chimed in, “We just like to see each other succeed. Everyone loves each other and there’s no egos on this team. When guys get their opportunity, they come through. No one’s complaining about not playing because they know that when they get their chance, they’re going to do well. That’s what makes baseball so much fun.” I’m sure that winning games and pitching complete outings has also been fun for Justin.

I bet that a microscopic ERA for ace reliever Logan Salow has also been a lot of fun. The senior left-hander from Ashland echoed all the sentiments we’ve been hearing regarding team chemistry. “We have a close-knit group. Everybody coming together. Everybody feeding off each other’s energy. It’s coming together to form a really good bullpen.”

Are you kidding me? Either all these guys are reading off the same script or there really is something to this blue-blooded chemistry. And remember, it’s not just chemistry between the lines. Senior second baseman Connor Heady told me, “Everybody on our team has really good chemistry off the field,” he said. We’re constantly hanging out with each other. We’re constantly doing stuff with each other. It’s a great team and a great group of guys to be around every single day.”

This clan sounds more like The Waltons than a college baseball team, but if that’s what makes this group tick, then who am I to doubt? Consistent hitting, strong pitching and solid defense are the keys for any successful season and these Wildcats appear to have it all. Throw in that intangible chemistry hocus pocus and let’s all start packing tomorrow for the College World Series. It’s a brotherhood of believers. It’s the stuff dreams are made of. Good night John-Boy.