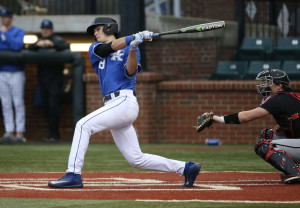 This award honors the top amateur baseball player in the nation for their performance on the field. The semifinalists are 25 of the nation’s most elite players and White is one of four players from the Southeastern Conference on the list. Former Wildcat A.J. Reed claimed the award in 2014 and joined the likes of Major League Baseball stars Kris Bryant, Trevor Bauer, Bryce Harper, Stephen Strasburg, Buster Posey, and David Price, who also won the award.

The 6-foot-3, 205-pounder is hitting .366 in 46 games. He leads the team in doubles with 23 and slugging percentage (.629) this season. He’s scored 39 runs, driven in 38, hit eight home runs and stolen six bases. He now has 222 career hits, ranking him ninth on Kentucky’s all-time career hit list, and his career batting average of .353 is sixth highest in school history.

Finalists for the prestigious honor will be announced on June 14 and the winner crowned on Thursday, June 29.