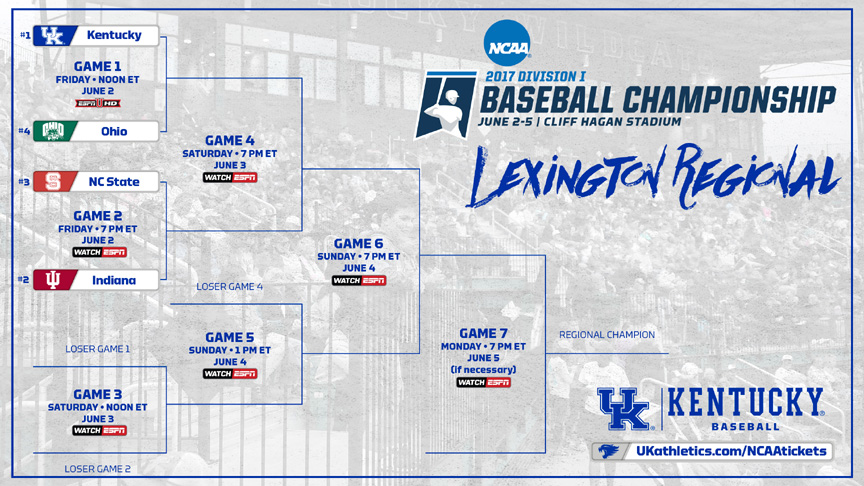 LEXINGTON, Ky. – Top-seeded Kentucky will open the NCAA Tournament at home against No. 4 seed Ohio University on Friday afternoon as the first game of the Lexington Regional, it was announced on Monday. No. 2 seed Indiana and No. 3 seed North Carolina State will square off in the nightcap at Cliff Hagan Stadium.

First pitch for the Wildcats and Bobcats is noon ET and the game will be aired on ESPNU. Indiana and N.C. State will begin at 7 p.m. ET. Times for Saturday and Sunday are tentatively set for 2 and 7 p.m., but subject to change. Monday’s regional final, if necessary, is scheduled for 7 p.m. 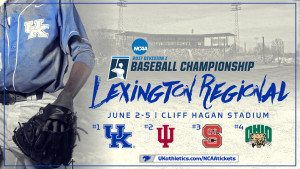 Kentucky will stage its first baseball postseason games since 2006 this week after being selected one of 16 schools to host the NCAA Tournament Regional round. The games will take place Friday, June 2, to Monday, June 5, at Cliff Hagan Stadium. It will be just the second time the program hosts the four-team regional bracket.

Additional details for the Lexington Regional can be found HERE.