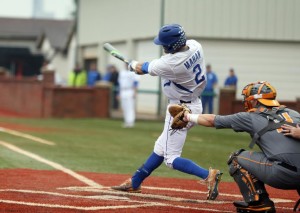 Riley Mahan
The University of Kentucky baseball team beats Tennessee on Friday, May 12, 2017, at the Cliff.
Photo by Britney Howard

LEXINGTON, Ky. – Riley Mahan is the Southeastern Conference Player of the Week after a white-hot week at the plate, it was announced Monday by the league office. It is Mahan’s third SEC Player of the Week honor this season, joining Mississippi State slugger Brent Rooker as the only three-time winners of the award.

Mahan also earned the honor for the weeks of March 6 and April 24.

The junior infielder was dialed in all week as the No. 8 Wildcats knocked off Indiana and swept their three-game weekend series with Tennessee. The Cincinnati, Ohio native hit .667 (10-for-15) in the four games, cranking three doubles, a triple and three home runs, scoring six runs and driving in eight. He had a 1.600 slugging percentage and .722 on-base percentage, nearly hitting for the cycle in two different games.

In addition to Mahan’s two Player of the Week awards, UK pitchers Sean Hjelle and Logan Salow took home SEC Pitcher of the Week in back to back weeks in March.