No. 4 Wildcats remain atop the SEC East with 15th conference victory 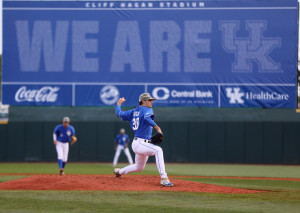 The University of Kentucky baseball team beats Georgia on Saturday, May 6, 2017, at the Cliff. – Photo by Britney Howard

LEXINGTON, Ky. – Troy Squires knocked in four two-out runs and Zach Logue bounced back from a handful of rough starts with a terrific outing to push No. 4 Kentucky to a 7-4 victory over Georgia on a clear and cool night at Cliff Hagan Stadium.

The Wildcats’ earned their 15th win in Southeastern Conference play, joining the 1996 and 2016 teams for the fourth most wins in league play in school history. They also moved to 21-4 at home and set up an opportunity on Sunday to win their seventh SEC series in eight weeks.

Logue was dialed in from the start, not allowing a hit until Mitchell Webb’s solo home run in the fifth. The junior left-hander finished with a career-high 11 strikeouts in 6.2 innings, earning his sixth win of the season. Freshman lefty Zack Thompson came on in relief with two men on the seventh, shut down that rally and ended up striking out five of the seven batters he faced to earn his first career save.

At the plate, the Cats used a four-run third inning to grab a lead and put Georgia on the defensive. The rally was capped when Squires hit a two-out line drive with the bases loaded that carried over the centerfielder’s head and cleared the bases. The junior catcher, who also had four RBI in a win at Old Dominion earlier this season, worked a tremendous at bat in the seventh and guided another two-out double just inside the LF line that provided the Cats with an important insurance run.

Justin Lewis will take the mound Sunday afternoon as UK tried to win its seventh conference series in eight weeks and remain in first place in both the division and overall league standings.

Bot 3rd – Tristan Pompey singled through the right side and advanced to second base on a single from Evan White. Both runners advanced after a balk. Luke Becker walked, which loaded the bases. Pompey scored on a passed ball, and Riley Mahan walked to fill the bases again. Troy Squires doubled to center field, scoring all base runners. UK 4, UGA 0.

Bot 4th – Marcus Carson singled to right field, stole second base, advanced to third base on sacrifice bunt from Connor Heady, and scored after Pompey hit into a fielder’s choice. UK 5, UGA 0.

Bot 7th – Becker walked, stole second base, and advanced on an error by the second baseman. Squires doubled down the left-field line, scoring Becker from third. UK 7, UGA 4.

o   The 11 strikeouts set a new career-high, besting the nine he recorded against Missouri on April 15, 2017.

o   It is also the most strikeouts any UK pitcher has had this season and only the second time on has recorded double-digit Ks. (Logan Salow, 10, at South Carolina, April 30)

o   Squires now has six multi-hit games this season and eight for his career.

o   White has 18 multi-hit games this season and 62 for his career.

o   He has reached base safely in 14 straight games.

o   The home run was his team-leading ninth of the season and 15th of his career.

o   The 12 sacrifices tie him with Mike Brown for fourth on UK’s single-season chart.

Kentucky will for another series victory on Sunday afternoon at The Cliff. First pitch is at 1 p.m. Fans can listen on the UK Sports Network via UKathletics.com and iHeart Radio, as well as on 630 AM WLAP, and watch on SECN+.