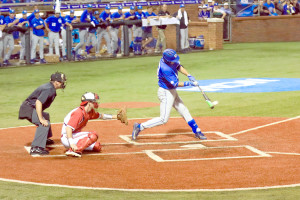 LEXINGTON, Ky. – There will be Monday baseball at Cliff Hagan Stadium.

Top-seeded Kentucky forced another game in the Lexington Regional final with its 8-6 win over No. 3 seed NC State in front of 3,261 fans on a clear Sunday night at Cliff Hagan Stadium. It was the second do-or-die win of the day for the Wildcats, who again will face the Wolfpack on Monday night in a winner-take-all game to advance to the Super Regional in Louisville next week.

Monday’s game is set for 7 p.m. with NC State as the designated home team on the basis of having been the home team in fewer games during the regional.

The Cats (42-21) gave up two early runs in the second inning, but responded quickly in the bottom of the third when Connor Heady and Tristan Pompey crossed the plate on a one-out double from Zach Reks and a sacrifice fly from Kole Cottam. The Wolfpack tacked on another run in the top of the fourth inning, but Marcus Carson knotted the game back up in the bottom half of the inning with his second home run of the day.

Cottam barely missed another home run when he tripled off the top edge of the wall in right-centerfield. The sophomore catcher ended up scoring anyway when Riley Mahan singled, giving Mahan his 11th RBI in four regional games and the Wildcats their first lead of the game.

From there, the UK’s offense stayed steady and scored at least one run in each inning from the second through sixth. With two outs in the bottom of the sixth inning, the Cats were still able to push across four runs with three hits and three walks. Pompey and Reks finished with three hits each, while Reks and Mahan drove in four runs combined.

Brad Schaenzer started on the mound for UK, providing four innings of work before Chris Machamer entered. The freshman right-hander from North Canton, Ohio, settled in, struck out the side in the sixth inning, and nabbed four strikeouts. Logan Salow took to the mound with one out in the seventh inning, and it was over from there as the senior retired all eight Wolfpack batters that he faced paired with four strikeouts, earning his team-record tying 12thsave of the season.

Bot 3rd – Connor Heady and Tristan Pompey both singled to RF. Zach Reks singled, scoring Heady, and advanced to second base on a fielding error by the left fielder. Kole Cottam placed a SAC fly in CF, scoring Pompey from third base. UK 2, NC State 2.

Bot 6th – Pompey doubled and Evan White walked. Reks singled up the middle, scoring Pompey and moving White to third base. Cottam walked to load the bases, and Mahan walked, bringing White across the plate. Luke Becker singled down the third-base line, which scored Reks, and Cottam scored on a wild pitch. UK 8, NC State 3.

o   The 41 victories are the fourth most in school history.

o   He extended his reached base safely streak to 34 straight games.

o   Pompey has 26 multi-hit games this season and 33 for his career.

o   Pompey’s 94 hits this season are the third most for a UK player in a single season.

o   Extended reached base safely streak to 27 of last 30 games.

o   Mahan now has 17 multi-RBI games this season and 24 in his career.

o   Mahan now has 67 RBI on the season, moving him into 6th on UK’s single-season list.

o   It was Carson’s seventh home run of the season and second on the day.

o   Carson now has 19 multi-hit games this season and 26 for his career.

o   Heady logged his 14th multi-hit game of the season and 20th of his career.